Review: The Joker: Year of the Villain #1 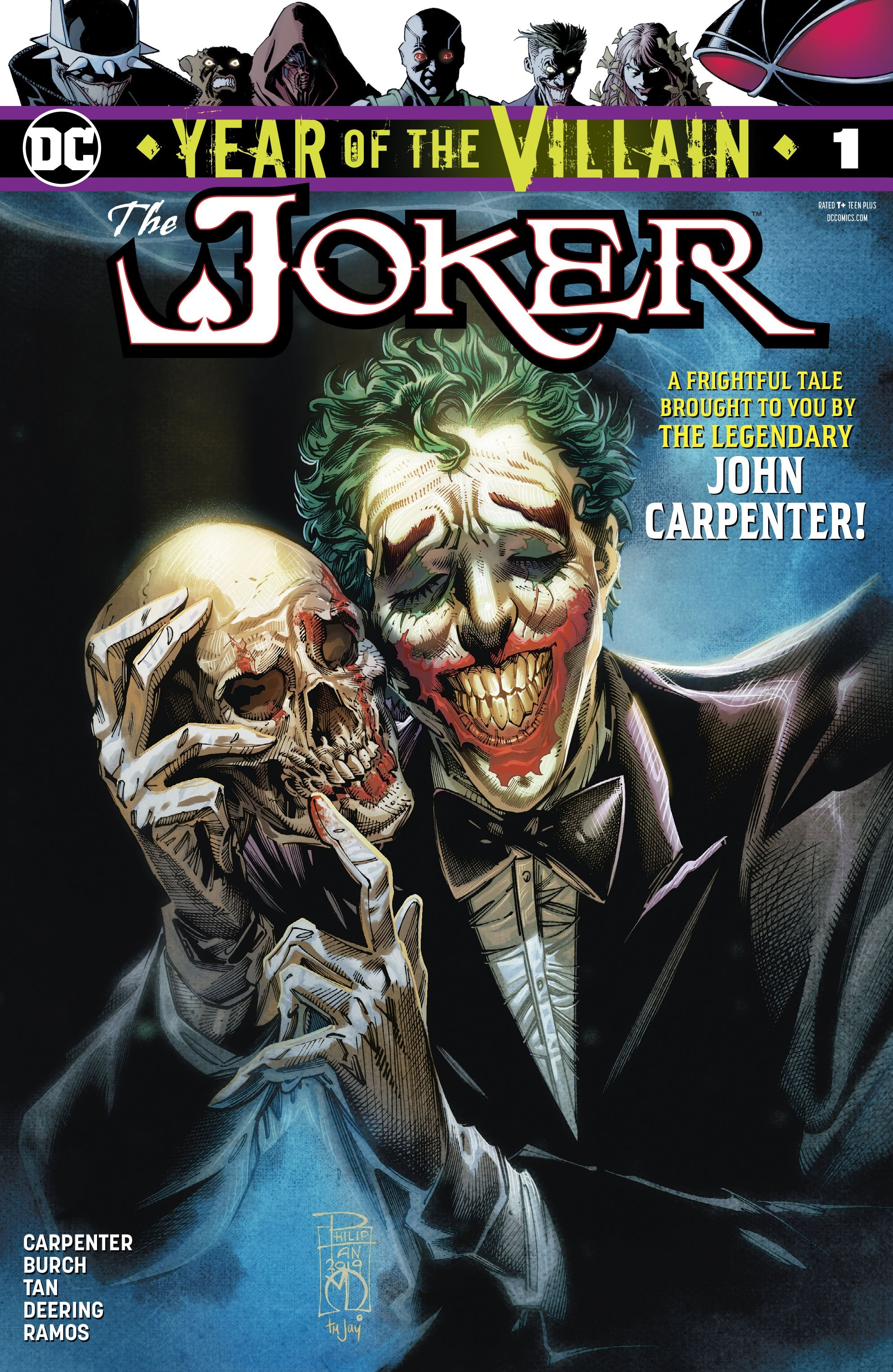 Overview: Joker escapes from Arkham and decides to be Gotham’s Dark Knight.

Synopsis (spoilers ahead): As the Joker escaped Arkham, he decided to explore Gotham with Jeremy – a fellow inmate at the facility. They went to Joker’s old hideout, and his old associates said they were just on their way to break him out. Well, Joker did not appreciate their “attempt” and blew up his old headquarters. While the place burned to the ground, Joker began roasting some marshmallows.

Joker and Jeremy left the warehouse and robbed a bank. However, no one came to stop them. Next, they dumped some of Scarecrow’s fear toxin into the water supply, and again no one stood there to stop them. With Bane in charge, the cops seem to just ignore crime.

Joker gets in the car, and tells a fear-stricken Jeremy a joke: “A boy says to his father, ‘Help! I am spinning in circles.’ The father says, ‘Shut up or I’ll nail your other foot to the ground too!” Jeremy keeps driving with a solemn look on his face. Joker pulls out his gun and tells Jeremy to say something funny. In this high-pressured moment, Jeremy could not think of a joke; he just told his life story. He grew up with a physically abusive father, and one day Jeremy fought back and hit his father’s head with a frying pan. His mother told Jeremy he was insane and went to check on her husband. Joker says they need to break this pattern of lawlessness like Jeremy broke his father’s skull.

They go to a gas station and Condiment King tries to rob the place. Condiment King goes up to Jeremy and threatens him; however, the Joker intervenes and asks if Condiment King was threatening his henchmen. Joker tells him he is a scourge on the city and should be dealt with. He knocks Condiment King out and declares delivering justice is fun.

After buying Batman and Robin Halloween costumes, Joker and Jeremy dress up as the dynamic duo. Joker declares that the man walking his dog below is a miscreant. They go to investigate this situation further. Joker becomes startled and shoots the man and his dog because he believes they both have guns. They were unarmed. He hugs Jeremy and tells him it was either them or Jeremy, and he chose his boy wonder.

After “solving” this crime, they encounter the Enchantress. Unfortunately, this encounter does not go as planned and they had to escape.

They end up at a diner and proceed to get dinner. The waiter says Jeremy’s milkshake costs six dollars and Joker loses it. Before Joker can squeeze the trigger, Jeremy pays the man. Joker says he now looks like a fool since his “student” picked up the tab. Jeremy says his reasoning was he was always taught by his mom to pay first. They both agree his mom sucks.

They left the diner and went to the rooftop to travel to their next destination. Joker made the jump between the two buildings, but Jeremy came up short. He uses this opportunity to escape from Joker.

Jeremy goes to see his mother for the first time in five years. He went inside and saw his mom strapped to a chair. Joker remembered everything that he said about his family and his mother in particular. Joker was going to serve “justice”, but Jeremy pleaded for him to stop. After getting the jump on Joker, Jeremy preceded to choke him. Joker pleaded for Jeremy to choke him harder, and Jeremy snapped out of his primal rage. Using this opportunity, Joker grabs a crowbar and smash Jeremy’s face. Leaving him barely alive, Joker left in glee. He had a fun night exacting “justice”, but it was time for something else.

Jeremy got up and untied his mother. He just repeated apologies and she apologized too. They both left for the hospital.

Analysis: For those who do not know, John Carpenter is the acclaimed director of the Halloween movies. Well, he, with Anthony Burch as his co-writer, can write a comic. In fact, I hope DC hires him on for more stuff. He has a fantastic grasp on the character Joker. The pacing was great, and the dialogue was fabulous too. This is just a fantastic one-shot, by far the best “Year of the Villain” issue.

The art by Phillip Tan, Mark Deering, Danny Miki, Jonathan Glapion, and Jay David Ramos is incredible. They all worked as a team and created a comic with tons of action, many heartfelt moments, and a haunting horror vibe. Seeing Joker and Jeremy dress up as Batman and Robin is the highlight of the issue. With the Joker makeup under their masks, they look frightening.

I enjoyed how the Joker viewed this Bane occupation of Gotham. There was no true “hero” of Gotham, and he was going to be its savior. However, his plan was utter chaos. There were so many cliche “hero” moments. My favorite bit from the “The dog has a gun too!” What an irrational thought to have, but it is evidence of how twisted his view of heroism is.

We can clearly see Jeremy has a mental illness. He was told by his therapist, “Mental illness is invisible.” He compares himself to the Joker, who as insane as he is, does not hide. The world had to pay attention to the Joker. And for some reason, Jeremy goes on this excursion with Joker for a while. Only when Joker got upset at the waiter for charging $6 for a milkshake did he question the situation. This is interesting. When he and Joker came upon the man walking the dog, Jeremy agreed with Joker’s analysis that there was something fishy with this guy.

You can see Jeremy’s anxiety in full force when he comes across the Enchantress. She is the most beautiful person he has ever met, and immediately he starts panicking about what she must be thinking. He has a myriad of thoughts that overwhelm him. Yes, this moment should not be a big deal, but for Jeremy it is gut-wrenching. This is an aspect of mental illness many people do not see nor talk about. Behind the fake smiles is a paranoid brain that will not stop thinking about the worst-case scenarios. As someone with a mental illness, I can completely relate. Many times these thoughts are all-consuming, but no one ever knows.

After my first reading, I thought Carpenter was presenting mental illness in a stigmatizing way. As someone who is bipolar, I became upset because I did not want to be associated with Jeremy – a man who did not say no to the Joker at first and was complicit in some of his crimes. I felt Carpenter was saying those with mental illnesses are susceptible to crime and violence. I did not want to be associated with the idea that all mentally ill people are unhinged and violent. I get frustrated when I hear that narrative in the news. After my second reading, I realized Carpenter was not saying these things. Jeremy had experienced much trauma in his childhood. This coupled with his mental illness caused him to dissociate. He walked and talked with Joker, but was not fully “there.” He was all up in his head and was detached from the craziness of the situation. Dissociation is a way for the brain to protect oneself. Only when the Joker flipped out over a milkshake did he become present again. The Joker, although twisted, was not someone Jeremy could fully relate too. It is hard being mentally ill, and often you suffer alone. You just want to find people who see the world as you do. You want to find others to experience the pain you feel. It is hard to describe what you are feeling with those who are not mentally ill. Although you try, it seems that there is something lost in translation. Jeremy thought Joker was like him, but he was the opposite.

In the end, Jeremy realizes Joker is not crazy. He is perfectly sane since he remembered everything about his mother and father. This gets into an interesting discussion. Is the Joker insane? Some say yes and others say no. My thoughts on this topic are the same as Alfred’s in The Dark Knight: “Some men just want to watch the world burn.”

Final Thoughts: I was not expecting much from this comic. Although I find the Joker interesting, I would have never thought a one-shot about him would be interesting. And, I could not have been more wrong.