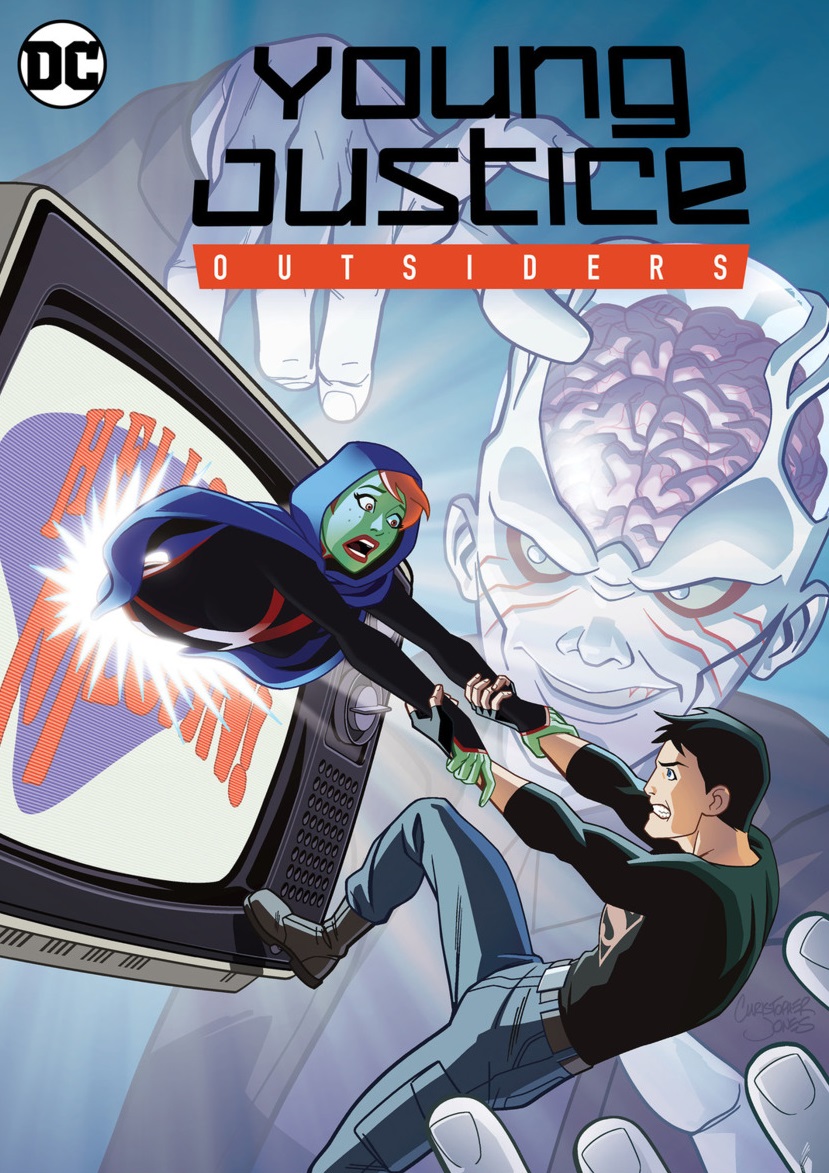 Synopsis (spoilers ahead): Part 1: On the Watchtower, the Justice League’s satellite base, Miss Martian, M’gann, meets with Batgirl, Beast Boy (Garfield Logan), and Superboy (Conner Kent) for a new mission. Superboy reacts negatively to M’gann’s presence, but Batgirl begins the mission briefing. The psychic supervillain Psimon (prominent in the first season of Young Justice) entered the US brazenly. M’gann knows it’s a trap, but believes she can handle him – though Superboy reminds her of her abuse of power in their last confrontation with Psimon. Batgirl asks Beast Boy why there’s so much tension between the two, and he says they got along well in their Martian mission (mentioned at the end of season two), but something’s changed. Superboy hears them and asks if they should get moving on the mission.

In Hollywood, at Goode World Studios, the team splits up to find Psimon. M’gann and Beast Boy visit a Q&A with actress Sandra Stanyon, who played the mother on the sitcom “Hello Megan,” from which M’gann based her appearance (and starring Beast Boy’s mother, who sadly died before season two). Conner enters the Q&A too and encourages M’gann to asks a question, giving her the confidence to do so. Sandra answers her questions warmly, and Gar also reveals himself as connected to the show. Conner and M’gann share a psychic warm moment, but Conner shuts it down awkwardly.

Elsewhere, Psimon reveals himself to Batgirl, telling her that he’s trapped her teammates, but also that he has a Bialyan passport and diplomatic immunity.

As Sandra talks to the rest of the team after the Q&A, Psimon captures them inside M’gann’s own mind, in a strange version of “Hello Megan”.

Part 2: Inside M’gann’s mental projection of “Hello Megan”, Conner tries to get her attention, but she doesn’t remember him. Beast Boy, trapped as a frog, hops onto Superboy’s shoulder.

Batgirl protests to Psimon that M’gann is much more powerful, but the villain laughs that her own insecurities keep her locked in his trap. He then briefly stuns Batgirl and makes his escape.

Beast Boy and Superboy attempt to figure a way out of M’gann’s projections, as M’gann continues to play Megan, preparing for a big song at the school show. Her mother (played originally by Sandra), plays into M’gann’s fears by reminding her of her failure, and M’gann confesses that she worries Conner will never forgive her. Superboy manages to hear that confession, and he and Beast Boy discuss his feelings. Conner reveals that he hasn’t really forgiven M’gann for altering his memories, even though she repented and took responsibility. Beast Boy tells him he must truly mean his forgiveness, as M’gann knows him too well even without her psychic powers to believe a lie.

Batgirl rushes to find her team, but they are all catatonic in Psimon’s trap.

Conner tries to talk to M’gann at the school, but she has to start her solo before he can say anything. She pours out her heart in the song, confessing her wrongdoing. In response, Conner talks, and truly forgives her, also asking for her own forgiveness for pulling away on Mars. M’gann is able to snap out of the trap, much to Batgirl’s relief. Though Psimon got away, likely to Bialya, the team has healed from some of the scars of the last several years.

Analysis: Similar to the comic tie-ins for the first and second seasons of Young Justice, series co-creator Greg Weisman uses this tie-in comic to fill in some gaps that the show leaves open. In this case, Weisman addresses the issue of Miss Martian and Superboy’s relationship, still not fully healed after season two, but those who watch season three will know that in two years, they will be stronger than ever.

In these twenty-two pages, Weisman and artist Christopher Jones (ably assisted by colorist Kelly Fitzpatrick) tell a fun little story moving the characters along the path. Jones does a really excellent job capturing the style and design of the show, all characters looking just as appealing as they do on screen. Fitzpatrick’s coloring is excellently judged – using strong planes of color and solid shadows, as well as some very nice moments of negative space in the reconciliation between M’gann and Conner.

Plenty of continuity nods to the show, especially all the ways the show “Hello Megan” is used, provide a treat for longtime watchers. Though this isn’t really a standalone story, more existing to support the main arcs of the story and provide a “what happens between the big missions” story, it’s still quite enjoyable, and hopefully, enough people will check it out to encourage DC Universe to commission a few more.

Final Thoughts: A fun story showing the progression of M’gann and Conner’s relationship between the second and third seasons of the show.