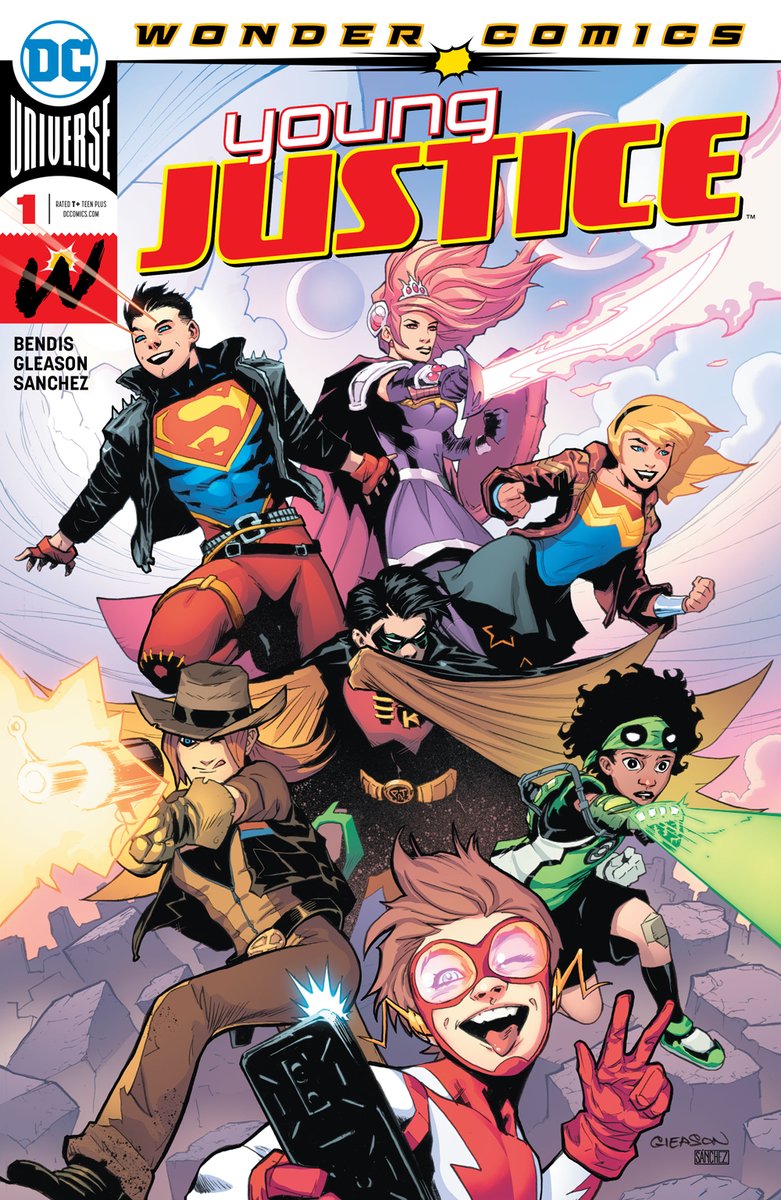 Overview: Drawn together by one extra-worldly threat, the classic Young Justice meets again – plus a few new additions.

Synopsis (spoilers ahead): Walking through a desert, a hooded figure comes to his Lord Opal to talk about how their “once-flourishing” Gemworld went into suffering due to Earth’s crises. Lord Opal is all ears.

In Metropolis, Jinny Hex is driving her old red truck through the streets when a police officer pulls her over for having a busted tail-light. Things escalate from there on and just as the officer asks her to step out of the car, the sky becomes purple and a team of six brightly colored folks emerges from a portal. They are from Gemworld and they’re calling for Superman.

Robin – well, one of them, as Tim Drake himself puts it – sweeps in feet first, taking down one of the Gemworld-ers. He was just passing by when Jinny pulled over and meets Cassie – Wondergirl – by chance on the streets. They’re in the middle of a conversation when the Gems attack. Tim springs to action but Cassie is hesitant.

As he’s facing his foes, Impulse – Bart Allen – comes along out of nowhere. Well, actually he comes from saving some kids in a park, an old lady, a baby, some cats… It is just when he shows up that Cassie, tears on her eyes, gather the courage to join the fight, followed by Teen Lantern. None of them is quite sure what exactly it is they’re doing and what precisely is the reason they’re fighting those guys.

Analysis: Conner, Tim, Bart, and Cassie are a deeply loved and appreciated Teen Titans/Young Justice group. Love them or hate them, CBR’s lists are a good measure of popularity. In a very confusing best/worst list, this is the team ranked as second best only behind the classic New Teen Titans. So, obviously, the anticipation for the return of Young Justice was considerably high. Not only does this issue meet the expectations but it also adds a little more gasoline to this particular fire.

The way Bendis structures the issue exploits that very anticipation by having characters appear one by one, leaving the best for last – well, maybe not the best considering this is a Batman site, but surely the most awaited. It is a strategy that undoubtedly works albeit speeding the pace of the plot to a point that leaves the reader a bit dizzy. Talking about dizziness, Bendis chose Impulse to represent the voice of the fan who has been expecting for this for a long while, screaming “Its happening! It’s happening! Young Justice is back!!” while running hectically everywhere.

Impulse is not only that, he’s also the shiny lightning of the art. While the entire issue is filled with Gleason’s typically expressive faces, dynamic poses inside more traditional rectangular panels, he goes a little wild when Bart Allen shows up. The panels tilt and shift and the world is upside down, he escapes from the frame and goes sliding into the next frame. Sometimes, only his foot can be seen inside the panel. It is a delight made even better by Sanchez’s bright colors and exceptional light effects. Simply by existing this title puts the relevance of Teen Titans in question. Those characters were once the Teen Titans, Wonder Comics is an imprint geared towards young audiences, and, we can’t deny, Tim is a much more popular Robin than Damian is. After reading this issue, though, I feel like Young Justice is more of a threat to Titans than Teen Titans. The characters read as if they’re in their early twenties – except for Bart, the eternal child. While the current Teen Titans read more as if targeted toward the late-childhood, early-teenage years, Young Justice seems like something written for the young-adult audience, an audience that would, in theory, relate more with Titans.

Bendis leaves a number of hints that the title will be dealing with issues typical of the young adult life such as managing work life and social life, plus a hint of Cassie dealing with anxiety. You have a more than capable writer, an unquestionably popular team, expressive art and well-designed characters, plus underlying themes that are in line with the current trend of dealing with the psychological and personal life of superheroes.

Oh, as for the Tim vs. Damian as Robin situation? I’d say they’re not dealing with the consequences for now. If there are any.

Final Thoughts: Bringing back a team that has proven time and again that works well together in a book with one of the most well-known writers in the industry paired with one of the most popular artists working for DC Comics was a killer move. By the end of the issue, that only thing that is left to question is the mysteries left in the plot itself. This is, undoubtedly, a book to look out for.