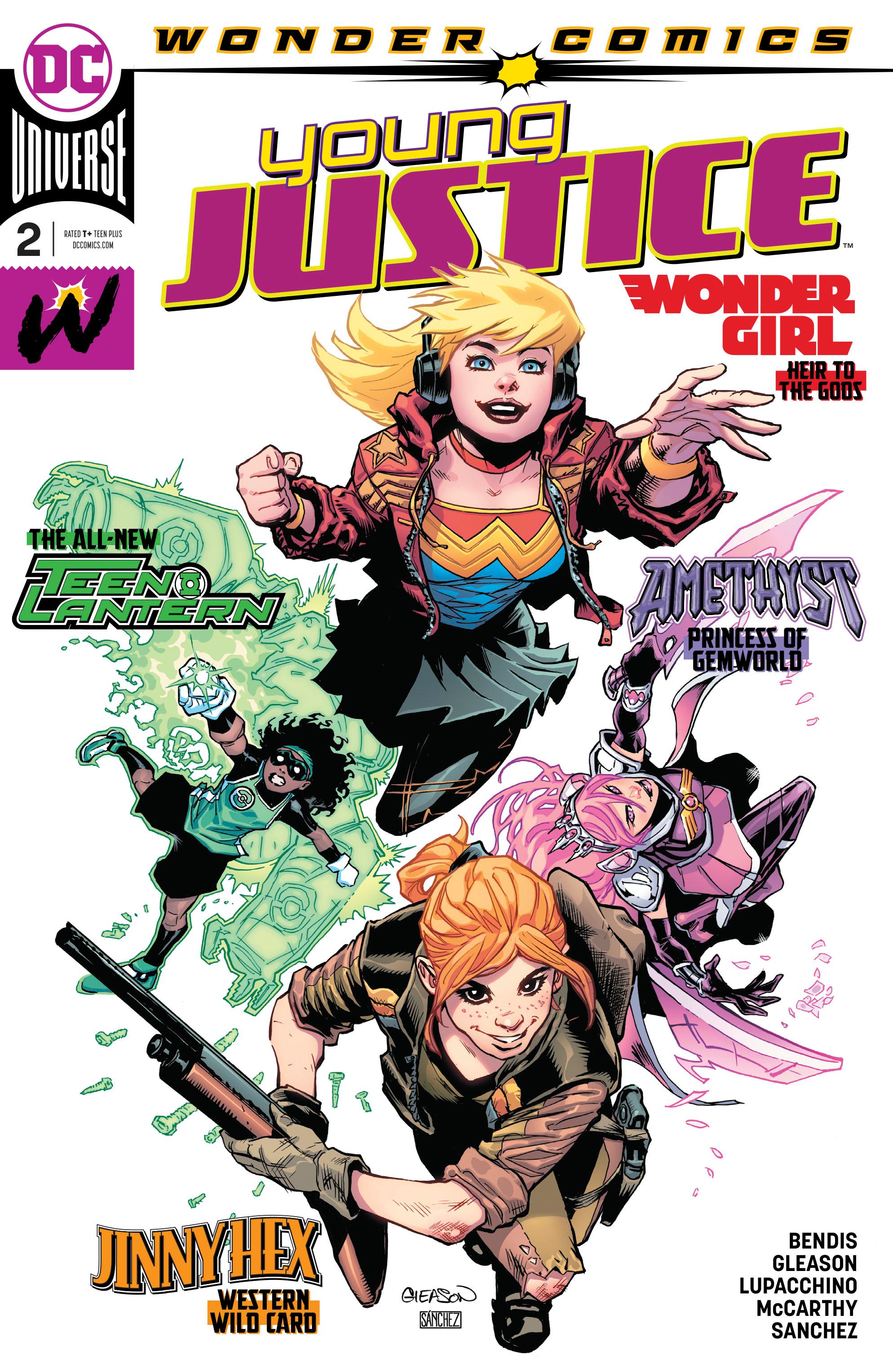 Overview: Scattered around a world that’s on the brink of political unrest, the hesitantly formed Young Justice team starts stumbling upon their missing members.

Synopsis (spoilers ahead): The issue opens with a bunch of random fellows gathered around some gem-fire sharing some gem-gossip about gem-royalty of Gemworld. They’re considering joining a revolutionary force to overthrow the house of Amethyst. Just as they’re gathering steam  Robin and Amethyst crash their meeting in the least polite way possible.

In another part of Gemworld, Jinny Hex is freaking out because there is some giant piece of green and shiny machinery standing on top of her car. She’s not happy. Before she does anything brash though, Wonder Girl dissuades her from shooting a Lantern construct. The situation reminds Wonder Girl of a weird day she had weeks in the past when, after taking down Despero, her grandfather, the Almighty Zeus, King of the Gods, comes to pay her a visit to try to give her a nice shiny and very suspicious gift that is supposed to give her strength and make her worthy of joining the official pantheon. She refuses the gift – a gem necklace – wanting to find her own path to whoever she ends up being.

Back in Gemworld, Wonder Girl, Jinny Hex and Teen Lantern take to the skies to run some area recon. Robin, flying on a winged unicorn studded with gems, literally crashes into Jinny’s car. Amethyst is with him and she introduces herself to Cassie as part of the royalty of Gemworld.

Analysis: After a dynamic, fast-paced, character-building first issue Young Justice #2 reads like a stumble after a near perfect start. It is not a fall though. Even if the plot was poorly written – which it is not – Patrick Gleason and Emanuela Lupacchino would have brought it to a high level. The rock that got on the way of this issue was a lack of character building and plot focus.

After being slingshot into an entirely different word with only a couple of words exchanged between them, the characters get very little space to further develop. Instead, we get half the pages of a Wonder Girl flashback that may or may not be related to the main storyline. In fact, the high point of the issue is the opening scene. The group of regular citizens from Gemworld talking politics around a fire that burns from a gem, does more world building than all the other twenty pages of story. From a single splash page we understand that gems are abundant in this world, even people who seem like hobos wear them. They emit energy and are seeing emitting not only light but also heat, so this may be a world that is running on gems. We also get one side of the political unrest that may be the backstory for Opal, who seems to be the main villain for the time being. Not only that, this is the page shows Alejandro Sanchez’s forte as a colorist the most – light and reflections. You top that with a few interesting character designs and you have a reader who’s barely interested in Cassie’s tale of young crisis with her grandad, who also happens to be Zeus.

This sequence is illustrated by Emanuela Lupacchino and happens halfway through the issue. Her’s and Gleason’s art are similar enough that you’ll only notice the change if you’re really looking for it. They’re also different enough for the shift in plot focus to work extremely well with their styles. Gleason is an artist that likes moving the camera around and shifting angles and he nails the action scenes right in the head. Lupacchino, on the other hand, is given to minor shifts with the camera, having the characters move around instead. It is this movement coupled with how expressive her human figures are that make the long conversation scene between Cassie and Zeus work. This, in the hand of the wrong artist, would have made for a very, very bland scene.

Final Thoughts: Overall, this issue presents a bland development of plot and character, made dynamic mostly thanks to Gleason, Lupacchino and Sanchez. While the dialogue was very on point and faithful to what little we know from the new characters, there is very little to help flesh out the dynamic of this new team. Yet, this title still holds high promise.