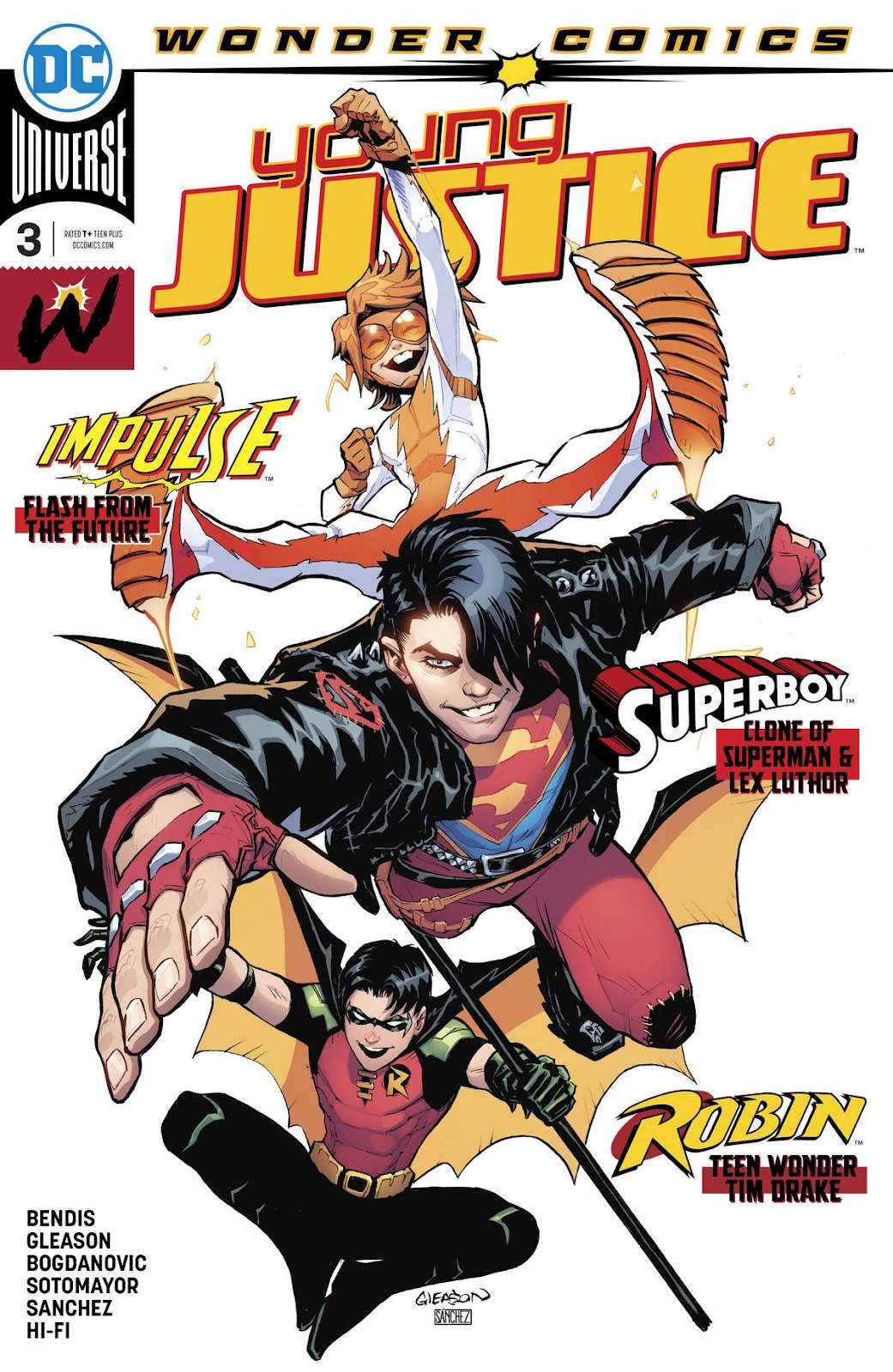 Overview: Bart and Conner have an unexpected get-together while the other members of the team end up in underground cells after being defeated by Dark Opal.

Synopsis (spoilers ahead): Continuing from where they were left off in issue #1, Bart and Conner meet up by chance in the middle of a gem-farm field. After rambling for a bit, Bart starts asking the real questions: why is Conner in Gemworld and why hasn’t he returned home? Before he can properly answer, the people of Gemworld who attacked earth appear and they’re after Bart.

Feeling confident because he’s got Conner with him, Bart starts teasing the guys, saying they’ve now reached “boss level” and they’ll have to deal with a Super. To his surprise, Conner kneels down with his hands behind his head and Bart gets tasered into oblivion.

We now enter a flashback of Conner fighting a “random monster” back on Earth, next to STAR Labs. He defeats said monster and a woman comes to speak with him, “debrief” him on what he has seen. She wants to take him inside the labs to talk, but he flies away. After that, in school back in Smallville, Conner can’t concentrate in his civics class. He’s very unceremoniously using his cellphone to search about STAR Labs. The teacher calls him out on it but he’s had it with school and, in a typical teenage bout, decides to throw it to the wind and fly away. Literally.

He goes back to STAR Labs and decides to punch his way in through the wall to find out what they’re hiding. He ends in a hall filled with gems connected by colorful beams of light and those gems get him transported to Gemworld.

Back in present-time Gemworld, Conner is being questioned about his Superman t-shirt. He tries to lie, says he bought it in Topaz Market, but one of the ones interrogating him recognizes it as “polyester and cotton blend” from earth. Just then, a woman appears, calling for Conner. She’s carrying a baby with a particular brand of curl falling on his forehead. That, Conner reveals to Bart, is his wife.

In another part of Gemworld, the rest of the team is locked up in underground cells, trying to figure out a way to escape.

Analysis: Before going into the review proper, I have to say that Doc Shaner’s variant cover for this issue is likely one of the best covers for a team book I have in my recent memory. Not only the color play distinguishing each character, but also the fact that it separates the new and the classic characters and, in a way, makes the new, yet unknown ones stand out even from the background.

Well, making the new, yet unknown characters stand out is something that has been missing in the pages of Young Justice. We’re three issues in this new series and the third seems to repeat the structure of the second, having half of it filled with a flashback focused on a classic character while the current-time events get sidelined to off-panel storytelling. Maybe Bendis’ plan is to have one issue dedicated to each character, but it is in the present that the actual team dynamics would get to develop. It isn’t developing in any way and it feels as if the only thing that keeps building up is the unresolved plot points that pile up every issue. Even the on-point and witty dialogue and the surprising plot structure – choosing to focus on a prison talk instead of the fighting itself, something unusual in superhero comics – have not been enough to stop my interest from waning.

The flashback of this issue, focusing on how Superboy can be a very impulsive young man indeed, is drawn by Viktor Bogdanovic, an artist who, despite having a good sense of storytelling, seems to struggle a bit with camera movement and facial expression. While it is easy to understand what is happening in every sequence, the moments he chooses to focus on a face shot feel out of place, and even when the panel is showing just the one face the expression in said looks stiff. His style also sometimes looks a bit too much like Greg Capullo’s, especially the faces, and this appears even more so from having Jonathan Glapion as inker who’s always working with Capullo.

Patrick Gleason, on the other hand, seems to be getting more and more comfortable with the characters, adding some particular facial features like Conner’s newly acquired square jaw. This issue is not one of his best nor the worst – if you consider he hasn’t been getting much space to shine, it makes sense. Even then, he has a particularly clever moment in this issue when he draws the team talking to each other through holes on the ground. By only slightly changing the shape of the hole, or the shadows, or the colors (props to Hi-Fi, who colored these pages) they make the reader realize those are all different people talking from different holes, yet they’re all supposed to be the same. Final Thoughts: The plot of the series feels as if it is on standstill while flashbacks take the forefront. This may yet prove to make sense once the full story unfolds but, meanwhile, the single issues are starting to feel more like “team member of the week” and less like a team book.