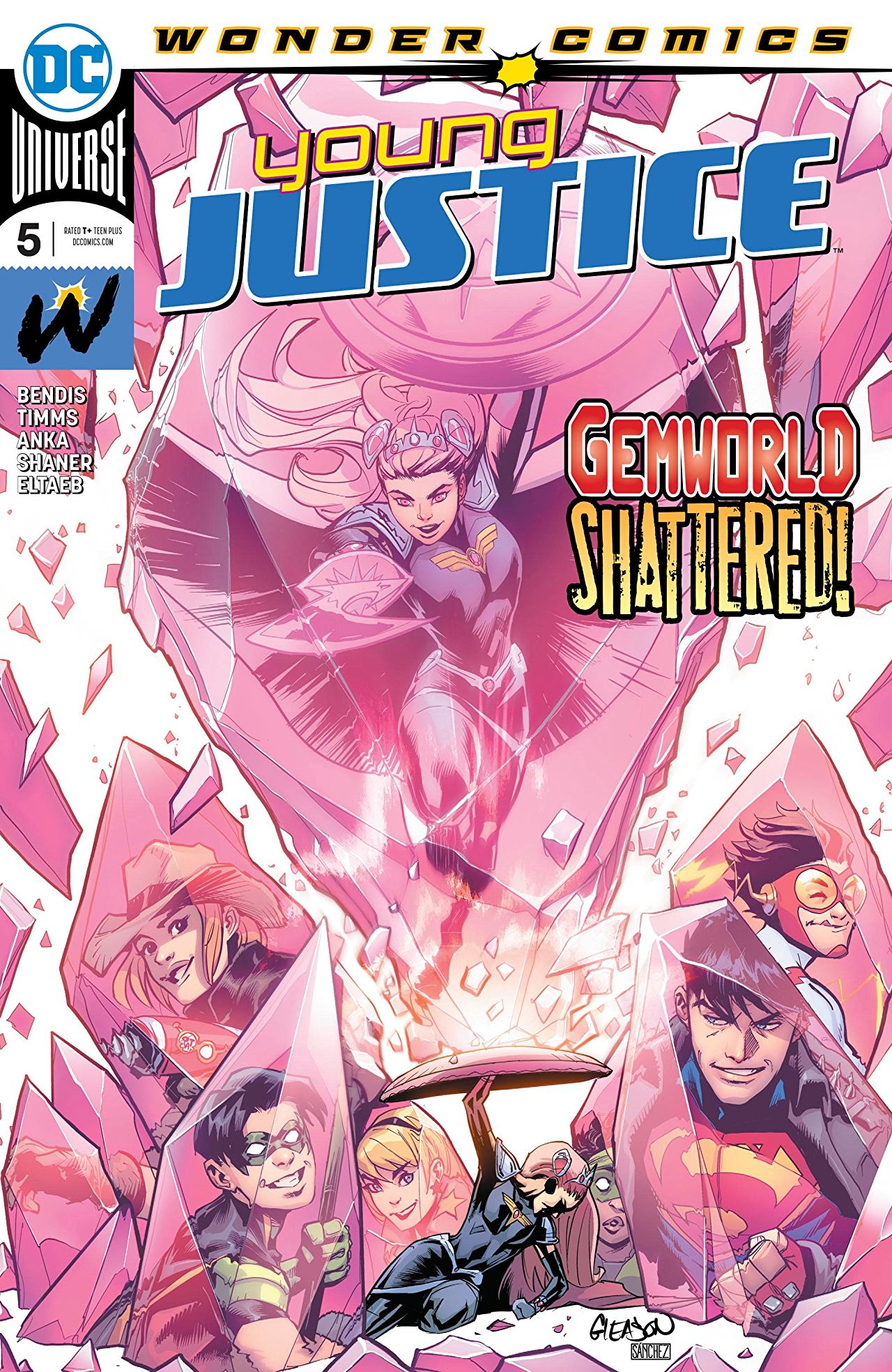 Overview: The team meets face to face with Lord Opal. Back in the near past, Tim Drake has his memories restored by Zatanna.

Synopsis (spoilers ahead): The issue opens with an introduction page telling the reader what has happened to this point in the story. Then, into the current events, the entire group is finally gathered and, together, they manage to escape Lord Opal’s prison pits. They’re on their way to freedom when Opal himself intercedes, kryptonite in hand.

The story cuts to two days before when Tim last met Stephanie Brown. They’re having a not-so-romantic date on the Red Bird, Tim’s car, right in front of the Hall of Justice. Steph is pestering Tim to admit that they have run away from home, since everyone back in Gotham thinks they went to college and they’re not exactly doing that right now. In fact, they’re investigating… something. Which is not mentioned,  something or someone always cuts them when they’re about to mention what it is that they’re investigating. The last something being a text from Stephanie’s father, Cluemaster, saying that he wants to connect with her, which is clearly a trigger for her and sends her into a bit of a crisis.

Thankfully – or not so thankfully – they’re interrupted by Zatanna. They called for her because they’d like to see if she can help them after their meeting with the other versions of themselves (back in the crossover Super Sons of Tomorrow). They’re confused and are not even sure what they’re looking for, and Zatanna realizes that Tim believes that his mind might have been tampered with. She goes into his mind and it promptly reveals an image of Bart, Cassie and Conner. He snaps out of the mind reading in a shock, as what he saw is “a whole other life”.

Back in Gemworld, Lord Opal is threatening the team, saying that since they trespassed in his kingdom everything of theirs should be considered his now. While he wastes his time speaking, Kid Flash steals the kryptonite from him and runs away with it, coming back to the scene in a few seconds. With Superboy now at his full power, the team attacks Opal and his troops. To fight back, Opal uses his power to disturb the realms of reality.

Analysis: After five issues split half in half between flashbacks and current action, we get to the one that should have come in the first issue: Tim Drake’s memory. Bias aside, the only flashback that felt as relevant as this was Amethyst’s memories from the political gathering, which gave an understanding of the inner workings of Gemworld.

This, had it come in the first issue, would have contextualized the Young Justice team in the current DC Universe, building up a bit of tension. Now, in issue #5, it does little to create the mystery that it tries to create. Nevertheless, this is a much-awaited scene by fans of Drake and Stephanie Brown alike, them having disappeared from the pages of Detective Comics to never be seen again – until now. It is a sweet sequence and very much Tim-Steph, focused on their interaction and banter.  Kris Anka’s art is a good fit for this scene with how expressive his faces are, despite his weak backgrounds. One can’t help but feel that his style would benefit from a looser paneling instead of the rigid square lines which demand background and take away from the faces, which are most definitely his forte. Also to be considered is the sheer effort Wes Abbott – or any letterer who works in a book written by Bendis for the matter – puts into making dialogue such as this readable in a clear order. John Timms and Gabe Eltaeb were the artists on the Gemworld scenes, Gleason and Sanchez being absent for this one. The change in artists led to some minor inconsistencies, such as Teen Lantern looking much older and an almost complete change in the design of the prison pits. The slight lack of intimacy with the world shows in most panels where Gemworld has a big importance, such as Lord Opal’s troops were just a grey blob of people.

And then, just as everything seems to be very bland, Timms and Eltaeb deliver a stunning page of Opal disrupting reality. Taking a page from Mitch Gerads’ style in Mr. Miracle,  the color channels are dislocated creating a dizzying effect and, by far, the most impressive page in this issue. Final Thoughts: This issue is torn between a very good flashback with bad timing and an engaging fight scene that gets split in half. Despite that, it still feels like it could have been the most relevant of the series since the first issue if it was placed better.