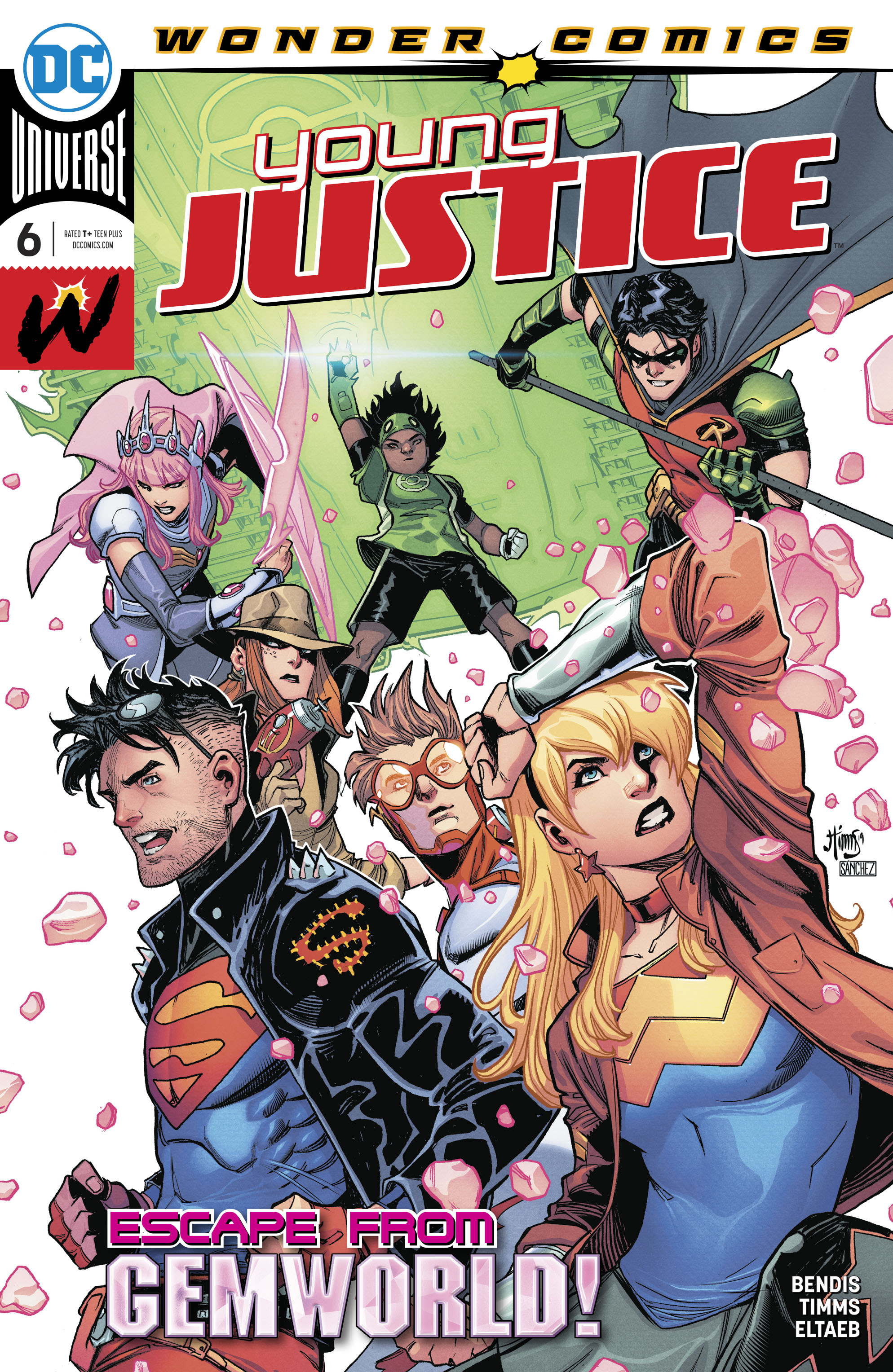 Synopsis (spoilers ahead): After Lord Opal used his powers in the previous issue, Gemworld went through an earthquake. As soon as the earth stops shaking, Robin does a group headcount. Amethyst explains that what they felt was Opal’s powers shifting reality once more. She believes she now has proof to show the council that he’s the one responsible for their current crisis. Before the subject goes on for long, though, Bart and Cassie shift the focus to Conner, asking him how exactly did he end up in Gemworld. With a baby.

He himself has no idea. One minute he was in Nevada, the other he was in the middle of a street market in the Gem. There, the moment he landed, he saw guards harassing a young woman for being pregnant without a husband. Conner, sensing the unfairness of the situation, presents himself as her husband. Turned out she was a farmer in Gemworld, recently widowed. In the end, they helped each other, him lending her a hand with the farm and taking care of her baby, her offering him a place to stay in this unknown world.

After Conner finishes telling his tale, Tim asks him if he has any memory of Young Justice. Not only does Conner has memories of them, but all the rest of the original group also does, confirming that Tim was the only one to have his memory altered. Taking the cue, Teen Lantern finally gets to introduce herself. She is Keli Quintela, an 11-year-old Bolivian who managed to hack into the Green Lantern Power Battery.

Jinny Hex also goes over her own reasons to be in Metropolis before the group got sent to the Gem. After examining the rather rare, legendary and non-disclosed contents of the chest, Amethyst promises Jinny that she’ll figure out a way to send them back in safety to Earth once they deal with Opal.

They wonder how to deal with his powers, and Amethyst starts explaining how they are gem-based science. Like all members of the royal houses, his power harkens from a prime-gem kept under guard inside his castle. Before she can finish listing all of the safety measures though, Kid Flash goes to the castle and comes back with the black opal. In a flash.

They expect Lord Opal to come for his gem but who comes for it is the castle which comes to life itself. The heavy hitters go for the castle while the rest of the team busy themselves with protecting the black opal. As expected, Lord Opal comes for the gem, threatening Amethyst with banishment. The team works as a group to and manage to deal with Opal.

After the battle, Conner goes back to the farm to say goodbye to his temporary family and Amethyst takes the team to the royal council to have them sent back.

Analysis: In the conclusion of the first story-arc, Young Justice delivers a fun, fast-paced issue. With a very small flashback when compared to previous ones, issue #6 has the breathing space to develop the plot that the other didn’t have. It might be the plot running more fluidly, it might be that the art is not shifting from one artist to another, it might just be that the loose threads were all finally tied, but this was undoubtedly the best issue since the debut of the title.

For the first time, the flashback featured in the issue felt important and connected to the main storyline. Conner, who already had a quite useless flashback back in issue #3, tells the tale of how he met the supposed mother of his supposed child, tying that big screaming loose end in a pretty bow. Not only that, Teen Lantern finally got her long overdue introduction, albeit short. In fact, she was the only one to not get properly introduced before, since the other characters have gotten introduction after introduction, issue after issue – and it makes one wonder how those six issues will read in trade, for the number of times Jinny and Amethyst – especially Amethyst – introduce themselves.

It is safe to say that this issue is a payoff for the previous, mildly bland ones. The action scenes are incredibly well conducted by John Timms, who seems to be the one chosen to fill the gap left by Gleason. Final Thoughts: A well-conducted, well executed and, most importantly, extremely fun issue wraps up the first story arc. Young Justice is back!