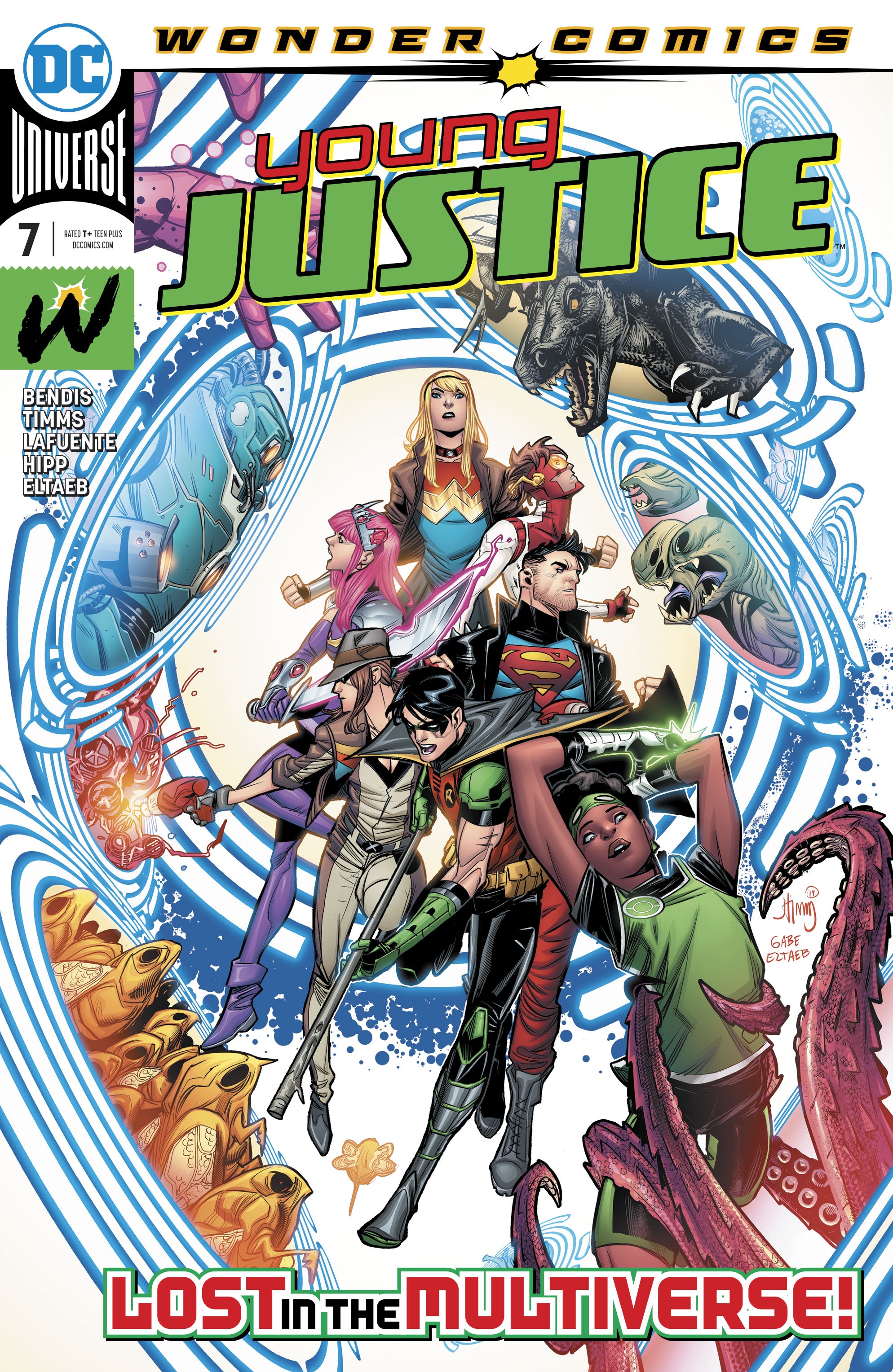 Overview: The Gemworld Court’s banishment sends the Young Justice team bouncing around the Multiverse like a pinball.

Synopsis (spoilers ahead): After being transported out of Gemworld, the Young Justice team wakes up on Earth-42, a world of candy colors with a fluffy Justice League waiting for them. Impulse has the reaction anyone in their right mind would: wanting to eat the lil’ Justice League up. And he says so, making the League see them as a potential threat. Cyborg sends them away to another dimension. Not home though, not yet.

They end up in Earth-26, inhabited by Captain Carrot and his speaking animal friends. Jinny Hex and Teen Lantern, who were already freaking out a little, start to really lose it since this is their first incursion into the Multiverse. This time, they get “sent out” by the Multiverse Mallet, a giant wooden hammer.

This time, they wake up on the grounds of the Hall of Justice. Except this isn’t their Hall of Justice. Not yet. Bart runs off to do some recognition and his report is that this world is filled with regular but way too silent people. Kon tells everyone to get into Jinny’s truck and they fly off. Amethyst starts to realize that the Gemworld Court probably sent them to the Multiverse on purpose as a way of banishment since that is what they were planning to do with her.

They start trying to figure out exactly where in the Multiverse they are when the Justice League show up. The Kingdom Come version from Erth-22, Dick Grayson as Red Robin and Alan Scott as Green Lantern and all. They start trying to explain who they are and things get out of hand a bit, with Kon mentioning how he is a clone of both Superman and Luthor, and Cassie saying she is Wonder Woman’s cousin. To try to solve it all, Cassie suggests Wonder Woman use her lasso on her. While Cassie explains the situation, Alan holds the rest of Young Justice inside green energy bubbles.

After a long, really long explanation, they are all let go. While Robin tries to talk the League into helping them out, Teen Lantern manages to find a newspaper front page showing that this Earth’s Superman killed Shazam – an Injustice storyline. Robin adds a little more urgency and apology into his speech to just please get them all home. As he seems to be working his way through when the Sons and Daughters of the Bat – now an element from The Dark Knight Returns – drop from a zeppelin to attack Superman.

After the bats have been dealt with, the Young Justice is taken to Dr. Fate for him to get them home. He manages to send them away alright, except he miscalculates which Earth to send them to.

Analysis: This is a brilliant example of a stand-alone issue can fit in the middle of a storyline that still connects both with what came before and what will come after. This is the one for the adult comic fan to take from the shelve and give to that young member of the family who is deadly curious about how the Multiverse works, or who is still not that much into comics. A perfect, fun, lighthearted introduction to all the potential of the DC Universe.

While I can see Young Justice #7 as a huge conversation topic amongst young or new readers – and how I wish I could give one to my non-English-speaking nephew. Its appeal to older readers lies only on the all-ages, fun aspect of it. Not that it is not appealing, it is just that it doesn’t add much to our baggage. It is a light, fast, easter-egg-filled, delightful read, but not a must-read. Dan Hipp’s art makes us react exactly as Bart Allen does – I also want to eat them all, they’re so cute. And then comes David Lafuente with a Captain Carrot and his cartoonish friends delivering the three most cartoonishly expressive pages in the entire issue. From there John Timms, the regular artist on the series, takes over and gives his own rendition of the Kingdom Come Justice League and the Sons of the Bats from Miller’s Dark Knight Returns. Two iconic graphic novels, with two very remarkable styles, and he manages to make them all recognizable while maintaining his own style. Those three artists combine so well together, making the transitions so smooth, that it almost makes me feel like a more dizzying contrast would work better for this storyline.

Final Thoughts: The definition of an issue that can lead to fun conversation amongst friends. The all-ages storyline and art hits the nail right on its head for the target audience of Wonder Comics, with a curated choice of artists whose works are a delight to the eyes and whose styles work together amazingly well.