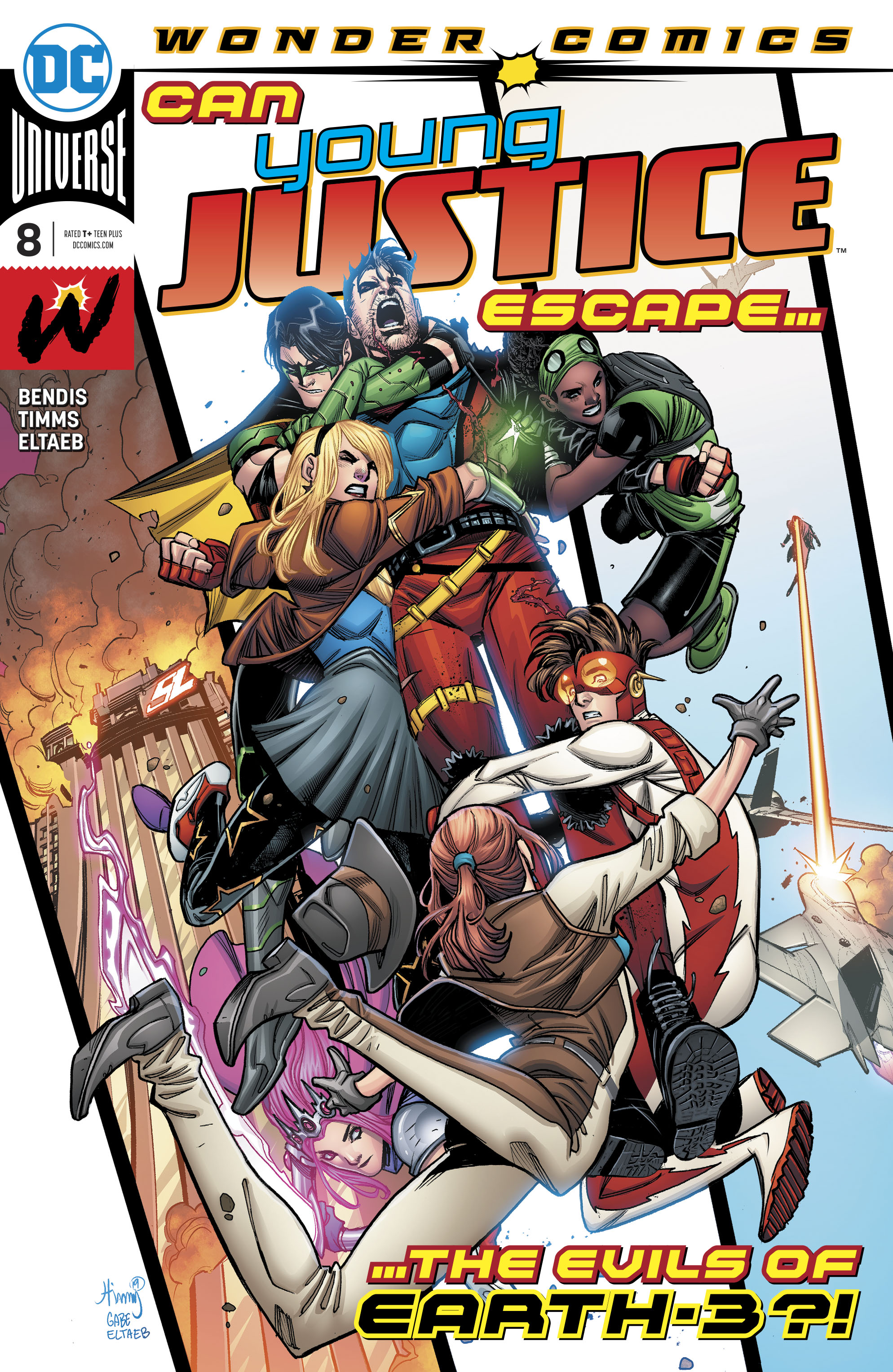 Overview: Still lost in the Multiverse, the Young Justice now have to deal with the chaos that is Earth-3.

Synopsis (spoilers ahead): After being thrown across the Multiverse like pinballs, the Young Justice team finds itself in Earth-3. The first people to meet them, of course, are their black mirror counterparts. Amaxon Thunder, Wonder Girl’s counterpart, is the first one to come into action, finding it all too fun to get to plow down someone just like her. While the action of almost the entire issue takes place, there is a narrator commenting on how Earth-3 works and how they ended up in this mess. The narration boxes are all purple and the person seems like someone who is not part of Young Justice, but that got to know them.

The narrator says that Crime Syndicate left their universe after starting the chaos that only worsened from him somewhere. Meanwhile, in the center stage, Luther-El goes after Jinny and Amethyst, but Superboy stops him just in time.  On another part of town, Impulse is racing Speed Zone. He pulls a trick on him and manages to lose him somewhere in Delaware. Superboy meanwhile is punching Amaxon and Luther-El, flying above the ruins of the Daily Planet.

On the ground, Tim Drake is watching the big hitters go all in, unaware that his counterpart is sneaking behind him. They fight for a while – bo staff versus bo staff – until his counterpart manages to get a blow through. Tim, nose broken, asks the other Tim what his name his. He goes by Drake, just Drake. While Red Robin’s blinks, interest piqued, Drake uses his distraction to get the best of him and shoot him in the head. Impulse comes in just in time, taking Red Robin out of the rubber bullets’ reach.

While all of that happens, the narrator reveals that Amaxon has a hold on both Metropolis and Gotham because both Luther-El and Drake are madly in love with her – and too shortsighted to see that she is merely using them. Not only that, in the absence of the Crime Syndicate, gangs started growing in power and territory, spurting a full-on gang war. Red Robins finds himself face to face with a member from one of the said gangs. He manages to almost get himself killed – again – but Stephanie Brown, the Batwoman of this earth, saves him.

She’s screaming in his face believing him to be Drake, but he uses the old and gold strategy of appealing to their relationship back in his Earth to get her to listen to him. When she is finally convinced, Bart comes rushing by and knocks her out, believing she is one of the bad guys. While Red Robin scolds him for having socked Batwoman, Bart goes on a tangent about how he should also call himself Drake. Tim is much more worried about getting Stephanie to her Batcave than he is with his name though.

Analysis: There is no other way to start this review then by saying: why did no one ever think of Drake as a codename before? Ok, I won’t buy the whole “one of the most dangerous birds” thing, just look at this guy – it is the definition of cute. Well, we can say it fits Tim Drake alright. We can all bet that this will be the most commented aspect of this issue, but well. This issue was amazing. Do you want action in your superhero comics? You’ve got action; top-notch, full blown, heavy-hitter facing heavy-hitter action. You want plot development and a connection to previous issues, with some character depth thrown into? It also delivers that. Do you want some well crafted comic relief? Can’t possibly have Impulse in a comic and not have that. Do you want some social commentary with your world-building? Yup, got that too. All of that with a perfect sync between all of the creative team.

Of course, to have all of that it means that no one topic gets enough space to actually fully develop, which does not mean that they are not well done. Let us start with the action. There are three major scenes that will leave you wanting some popcorn and cinema soundtrack (in fact, put on Wonder Woman’s theme in the background to read this issue). Amethyst holding a full-on Kryptonian eye blast with her sword and Superboy fighting both Amaxon and Luther-El at the same time, those were amazing dressings to the accompany the delicious meat of this mighty fine hamburger: Drake and Red Robin caught in a bo-staff battle. We’re a Batman website here, and of course, we would be biased, but John Timms and Gabe Eltaeb validate that bias by delivering a black-on-red action scene on a rigid grid, with figures filled with movement and amazing compositions. From there on, the issue really hits its full potential. This is about Tim and Stephanie, how he misses her, how we will soon change his name, how Stephanie will likely be the one spark of hope in Earth-3. And suddenly we’re back to issue #5, the one that featured Tim’s flashback, and the whole storyline that seemed to be a bit lost seems to be going back to its original track. And it is almost a shame, for Earth-3 seems to be a very promising world to build some stories – gang wars, social unrest, chaotic super-powered people. The primordial soup for interesting storytelling.

Final Thoughts: While the previous issue felt more like a fun stand-alone portraying the misadventures of the team, this issue gains flesh and brings the story back to its main line. With some stunning art delivered by John Timms and Gabe Eltaeb in every single action scene, this would be a must-read even if it weren’t for the suggestion of Tim Drake’s new identity –  which is coming from the most obvious place ever. That’s a stroke of genius.