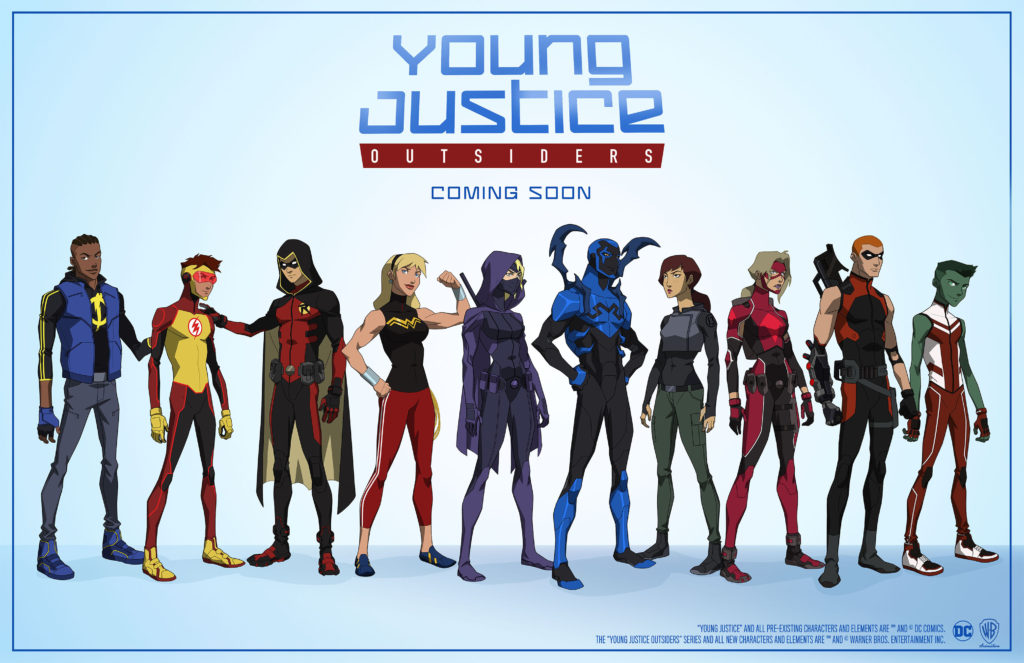 On July 21, the Batman Universe crew attended the Young Justice press room at San Diego Comic-Con. Producers Greg Weisman and Brandon Vietti were there along with art director Phil Bourassa. They are still very early into production of the third season of “Young Justice”, which has been subtitled “Outsiders”, so the crew was very tight lipped on any spoilers.

When asked about the possibility of the Tornado Twins appearing (since we last saw Iris Allen as a pregnant woman), Weisman replied,” I’m not going to give you spoilers, but time does pass so ….Mera was pregnant in season one…we haven’t seen their kid, but at some point as we move through time you’re going to start seeing some of this prodigy…”.

Although he was very tight lipped, Weisman did reveal one new character. “I’ll give you one other spoiler, we’ve got Bash Bashford in season 3.”. When the press table reacted enthusiastically Weisman said, “You can’t tell me you know who Bash Bashford is!”

When asked if Superman would be retaining his trunks, which he has lost in other media, Bourassa also had a spoiler guard up. “You guys will have to wait and see. We don’t even know if Superman is going to be in season three”, Phil said.

Vietti did confirm that we’d be getting a time skip. When asked about it he said, “We don’t want to define it yet,” but later elaborated, “We are doing a little bit of a jump again but we’ll save that surprise for the first episode.”.

Details about the new home for the show on DC’s streaming service are still vague. “I don’t have all the details on that”, Vietti said. “Cartoon Network was a good partner for us. They really embraced what we were after in terms of the realism of our series and they let us explore more mature themes. The beauty of a streaming service is that we no longer have the Cartoon Network broadcast standard and practices which allows us to push a little further than Cartoon Network might. And while we’re not going for a hard R rating or anything with the series, we still want the show to feel like the show that you watched on Cartoon Network. We do have a little more wiggle room in terms of the more mature themes and even the depiction of some of those things. Maybe even a little violence and a little blood are a little more acceptable with our new partners than Cartoon Network. So again we’re not trying to change it. We don’t want to be gory for gory’s sake and do rough language or something just because we can. But we do want to service the characters and put them in tough situations and explore more mature themes with these characters. Losing the broadcasting standards restrictions from Cartoon Network is very helpful”, he continued.

The entire crew felt very grateful to the fans for their efforts to revive the show.

“I don’t myself even know all the specifics, but the fans were able to communicate their love for the show in such numbers via social media, via streaming and anything else that they could do that the powers that be could not deny that they needed to look into bringing our show back. So undeniably I think that it’s the fans and their ability to make their voices heard online in so many different ways. That’s not something that I don’t think we had, even when we were on Cartoon Network at the time,” Vietti told us.

Like the fans, he had a hard time when the show ended. “It was difficult for me let it go. In some ways I worked harder than normal to push the show out of my head so I could just move on. It was almost like therapy for me,” said Vietti. “It felt like home coming back to it,” he said.

Greg Weisman had similar thoughts. “I can’t believe we’re back. It’s amazing. It’s a miracle. There’s a lot of specific things that I’m not going to say that I am really excited about. I’m really excited for the fans to be able to see this stuff. They worked hard to get this show back. We are incredibly grateful that they did and we want to reward them with the best show”.

Stay tuned to The Batman Universe in the coming months for more news on Young Justice: Outsiders.