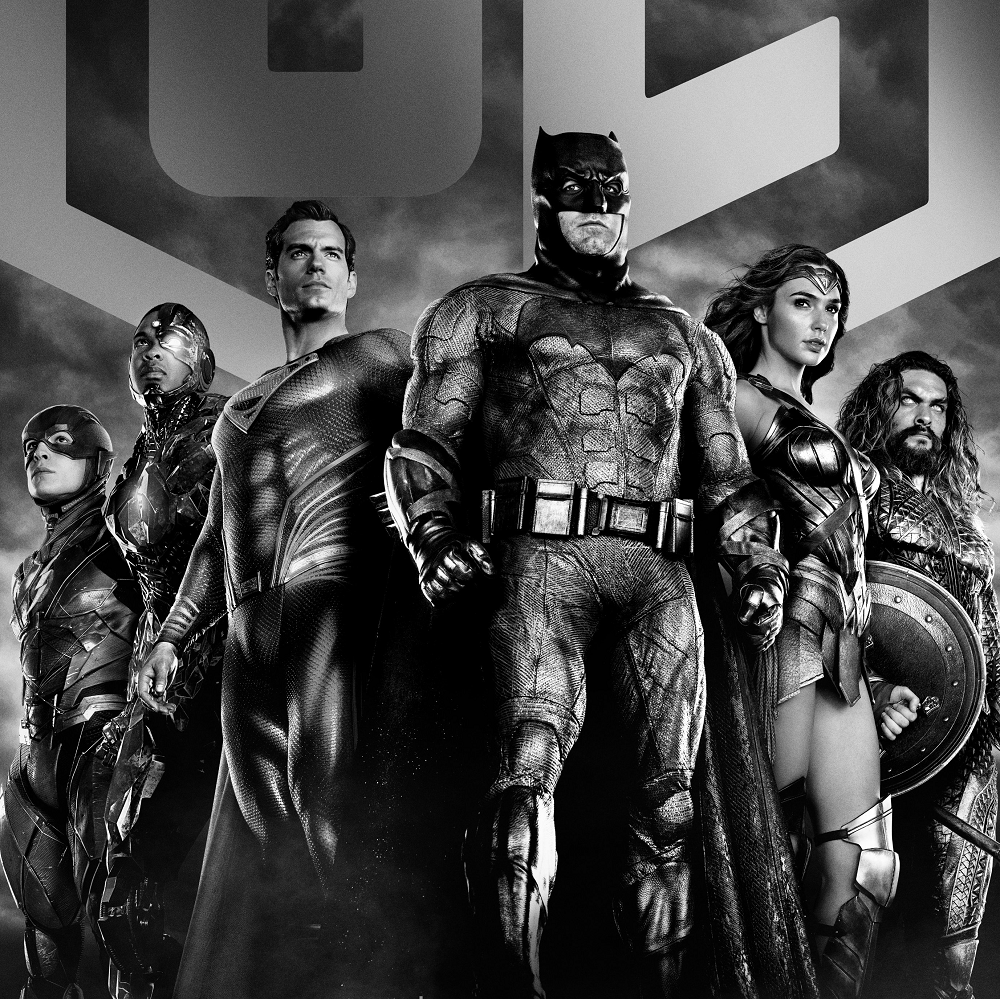 Overview: In 2017, Zack Snyder left his directorial duties on Justice League, and Joss Whedon took over to finish the film to mixed reviews. Since then, people have been clamoring and demanding for Zack Snyder to come back and finish his version. Now, in 2021, that dream has been realized with Zack Snyder’s Justice League and it has been released as a four-hour movie on HBO Max. Snyder now has the chance to finish his original trilogy of films that he started all the way back with Man of Steel and Batman v Superman: Dawn of Justice.

Synopsis (spoilers ahead): Zack Snyder’s Justice League opens with a flashback to the death of Superman at the end of Batman v Superman. His dying scream echoes throughout the world and causes the three Mother Boxes, one in Gotham in the care of Victor Stone and his father, Silas Stone, and the other two, protected by the Amazons and the Atlanteans, to awaken.

Bruce Wayne is trying to fulfill the promise he made at the end of BvS to find other heroes out in the world. His first recruit is Arthur Curry aka Aquaman. Aquaman refuses, preferring to go through life by himself. Bruce is picked up by Alfred to discuss recruiting Barry Allen to the team as we see scenes of how Martha Kent and Lois Lane are dealing with the loss of Clark Kent. Martha has lost the family farm in Smallville while Lois goes to the destroyed Superman monument in Metropolis every day.

The first big action piece in the movie is when Wonder Woman aka Diana Prince foils the actions of a terrorist group. This scene leads to Steppenwolf invading Themyscira with an army of parademons to steal the Mother Box from the Amazons. Steppenwolf is able to get the Mother Box after brutally killing dozens of Amazons. Queen Hippolyta sends a warning to her daughter of the impending attack. Diana sees the message and heads to Gotham to tell Bruce about the first time Darkseid and his army attacked thousands of years ago. Darkseid was defeated by Zeus, Ares, the armies of Atlantis and Themyscira, and Green Lanterns. Diana tells Bruce that Steppenwolf is here and another invasion is coming. The Age of Heroes must return.

Bruce is able to recruit Barry Allen, aka the Flash, to the team while Diana tries to get Victor Stone, aka Cyborg, to join. Cyborg refuses but joins the team after his father and other S.T.A.R. Labs employees are kidnapped by parademons seeking the Mother Box. After meeting with Commissioner Gordon, they track Steppenwolf and the parademons to an abandoned facility under Gotham Harbor. As the team battles Steppenwolf and his army, they are able to free the hostages. During the fight, Steppenwolf causes a flood underneath the tunnels. As the water starts pouring and threatens to take out the heroes, Aquaman comes to the rescue and is able to hold off the flood until the team can escape. Aquaman decides to join them after the second Mother Box is taken from Atlantis. Cyborg gets the last Mother Box that he had hidden, and they take it back to the Batcave to analyze it. The heroes decide to use the Mother Box to bring Superman back to life but understand the risk that Superman might not be the same man they once knew. Using the box will alert Steppenwolf to its whereabouts as well. They decide the reward is worth the risk.

During all this, Lois Lane is visited by Marth Kent and Martha gives Lois a pep talk to get back out into the world and back to her duties at the Daily Planet. As Martha leaves she transforms into the Martian Manhunter as we learn that old friend General Calvin Swanwick has been Martian Manhunter the whole time.

Diana, Arthur, Vic, and Barry retrieve the body of Clark Kent from the cemetery and take it to the Kryptonian ship in Metropolis to bring Superman back to life. The Flash is able to provide the charge to the box, and they are able to bring Superman back to life. When the heroes go to greet Superman, he is clearly disoriented and battles the heroes. He dispatches them pretty quickly and is only stopped when he sees Lois who was on the way for her daily visit to the Superman monument. Clark and Lois embrace and then fly off together. During the commotion, Steppenwolf arrives and leaves with the third Mother Box that he needed.

Clark and Lois fly back to the Kent family farm in Smallville as Clark regains his memories and once again meets up with his mother. Batman and the other heroes decide that they cannot wait for Superman and go to battle Steppenwolf as he tries to bring the three boxes together to form “The Unity” and allow Darkseid to come to Earth and receive the Anti-Life Equation. The team battles Steppenwolf and his army as Cyborg attempts to stop the merger of the Mother Boxes. Superman arrives, in his black suit, and manages to turn the fight in the heroes’ favor, but the boxes merge and cause a massive explosion. In an incredible scene, Barry enters the Speed Force and is able to reverse time and allows Superman and Cyborg to separate the boxes and stop the Unity. Aquaman stabs Steppenwolf, Wonder Woman decapitates him, and they send him through a portal back to Darkseid’s home. The Justice League shares a stare-down with the ruler of Apokolips before the portal closes, and Darkseid promises he’ll be back for the Anti-Life equation.

The team goes their separate ways. Bruce and Diana decide that the old Wayne Manor will form as the team’s headquarters. Barry gets a job in the Central City Police Department, Victor decides to use his unique abilities for good after being inspired by his father, Arthur decides to embrace his Atlantean roots, and Clark resumes his duties as a reporter as Bruce helps him regain the family farm in Smallville.

The movie ends with Lex Luthor escaping from prison and revealing Batman’s secret identity to Slade Wilson aka Deathstroke. Bruce then has another dream, or vision, of a possible future where he, Flash, Cyborg, Deathstroke, Mera, and the Joker seem to be the only heroes around to fight against an evil Superman. After Bruce wakes up, he receives a visit from the Martian Manhunter who tells him that they have to be ready for an attack from Darkseid.

Analysis:  This is the true Justice League movie. Zack Snyder is able to complete the story that he started in Man of Steel and continued in BvS. There are no strange shifts in tone as opposed to the 2017 version. This movie is quintessential Snyder. It does have some over-the-top violence, particularly in the Wonder Woman sequence and the fight between the Amazons and Steppenwolf, but it fits the world that Snyder has created.

The biggest difference between this new film and the 2017 one is the characterizations of Cyborg and the Flash. Barry is not the geek and just “happy to be there” character he was in 2017. He contributes to the team, shows off his scientific brain, and then fully unleashes how powerful he actually is in the time travel sequence.

Zack Snyder once told Ray Fisher, who plays Cyborg, that he was the “heart of his movie,” and he truly is. The emotional roller coaster that Victor Stone goes through is incredible. He loses his mother in the car accident that took away most of his body, is turned into a Cyborg by his father and the Mother Box, and shuts himself off from the world. After helping the Justice League save the world and motivated by the words of his father, Vic decides to embrace his abilities and be the hero that the world needs.

Steppenwolf is much scarier in Zack Snyder’s Justice League and menacing than he was in the 2017 version. His armor is life-like as the metal spikes constantly move and make him a difficult foe to bring down for the Justice League. Darkseid is very terrifying in the few scenes we see of him and lurks in the background as the great threat the League must avoid.

Gal Gadot is once again a standout as Wonder Woman. Other actresses may play this role in the future but I don’t see anyone ever being better than her at it. She OWNS this role. The future is murky on Henry Cavill as Superman, but he delivers as the Man of Steel in the short time he has. It remains a shame that he hasn’t gotten a second solo movie as Superman. While Ben Affleck will guest star as Batman in the upcoming Flashpoint movie, this movie serves as a great swansong for him as he is able to complete his character arc, which started in BvS. His interaction with Jared Leto’s Joker becomes one of the more interesting Batman/Joker moments put to screen.

Editor’s Note: Zack Snyder’s Justice League is now available exclusively on HBO Max in the US and on HBO platforms internationally. Complete the trilogy by watching Man of Steel and Batman v Superman: Dawn of Justice.

For fans that have followed along with the DCEU/ Snyderverse of films, Zack Snyder's Justice League is a great payoff. While the four-hour run time can drag, the action and the great character moments make it worth your time. It remains to be seen if the positive reviews of the movie will lead to more in the future as the film did end with a cliffhanger.