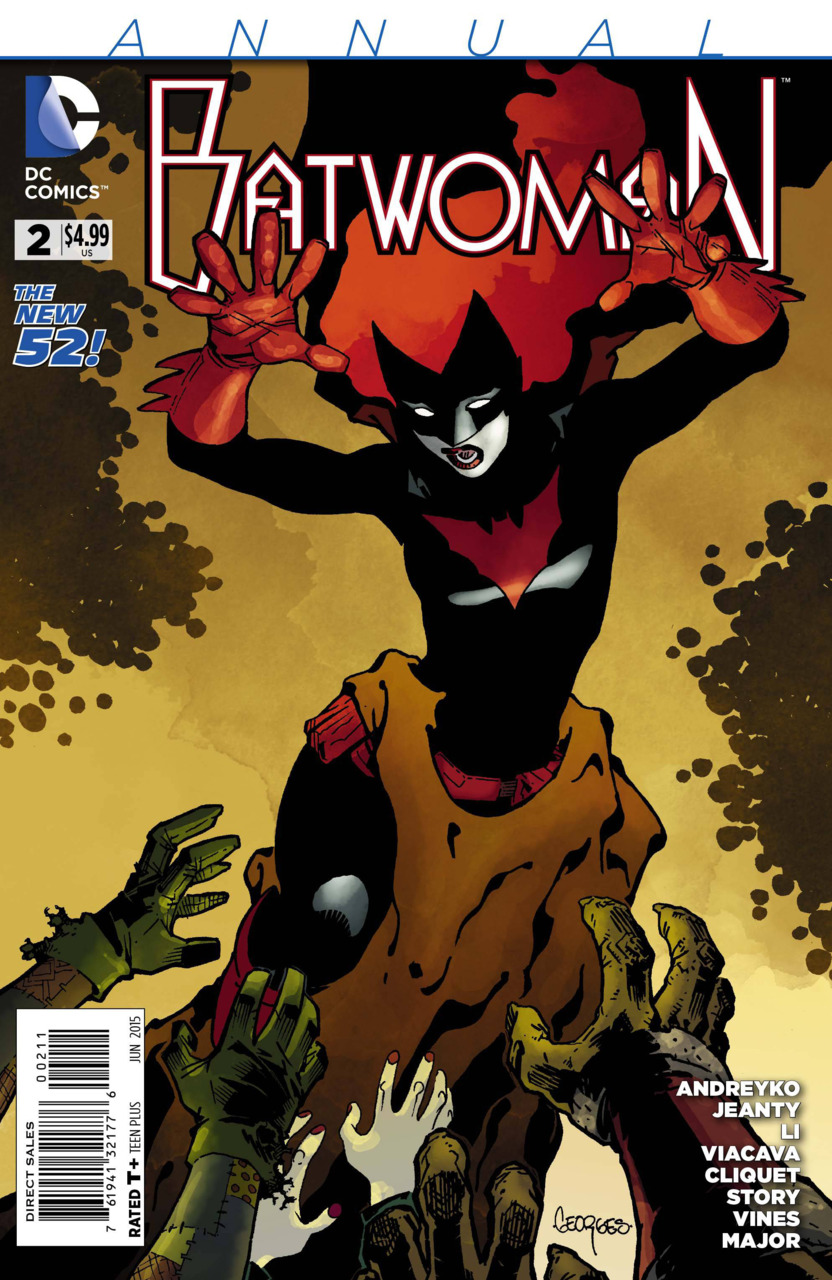 Batwoman Annual #2 starts where issue #35 back in October left off with Batwoman, Ragman, Clayface and Red Alice falling back to earth encased in Clayface’s body. They land in a body of water. Batwoman punches out and brings the sphere of clay to the land where they are shocked to find the world changed. It looks like they have gone back in time to a medieval world where the title of the issue “Medieval Times” is revealed. As they are trying to figure out what is going on, we get a comical scene where a wooden spike pierces Clay’s face. Batwoman is winged by a stake as well to no visible injury. They are being attacked by man-bats. Ragman and Alice are unconscious and they need to find cover. During the fight one of the man-bats mentions Queen Morgaine. Batwoman and Clayface fight off the man-bats where Clayface kills several out of self defense. Ragman recovers and the team finds shelter as Morgaine views them in a magic cauldron. She summons Nocturna along with several other creatures to combat Batwoman and her team.

Red Alice is alive and asks Ragman if he can revive her. He can only try. Clayface declares that he is starving which leads to another humorous panel where both Batwoman and Ragman are shocked that Clayface eats. They do need to eat they have to be a full strength if they are going after the Sorcerer stone.

In order to move around Gotham they need some inconspicuous attire. They settle in while Ragman attempts to revive Alice, Kate and Clay will move around the village. Kate wears a robe while Clay takes on the form a hand fan. They are not completely unseen. One of the creatures Morgaine summoned is made of bugs and those bugs are following Kate and Clay. Ragman knows that Alice’s soul is in his rags and he has to get her out. Ragman finds her but as she tries to swim out some other souls that Ragman trapped find her to prevent her from leaving. Alice states that she is different from the other souls because she wants to atone for her sins while the others do not.

Nocturna and the others confront Batwoman and Clay. The fight starts and Batwoman points to an alley saying that they have to get there she has a plan. Nocturna and the others chase them but an armored clad Batwoman carrying a sword runs out and is quickly taken down and captured and all are transported to Morgaine except for Batwoman. It was Clayface who attacked. Batwoman searches for Jason Blood, the human vessel for Etrigan. She looks where Gotham General should be and finds him. Batwoman convinces Blood that she is not helping Morgaine but in order to stop her, she needs his help.

Back at the hideout Batwoman with Jason rejoins Alice and Ragman. Ragman wants to know where Clay is. Batwoman explains the plan to the others.

At Morgaine’s throne room the prisoner she thinks is Batwoman is shown chained and kneeling in front of her. She would like for Batwoman to join her but she has a selfless streak that would interfere. She orders Nocturna to drain her. Nocturna approaches and prepares to bite when Ragman teleports the team in and Clay reveals his true identity. The fight starts again. Batwoman orders the others to fight while she searches for the stone. Nocturna grabs her ankle and in response, Kate kicks Nocturna in the head.

Jason runs and hides and Morgaine finds him and tries to crush his neck. Kate finds the stone and retrieves it. Jason chants the rhyme and becomes Etrigan by having Etrigan emerge from Morgaine’s mouth and consume Jason’s body. Etrigan dispatches Morgaine and Kate crush the stone under her boot. Gotham reverts back to normal.

We get an epilogue were with a voiceover from Kate we see Clay Ragman, Etrigan, and Alice as Kate muses that she was able to bring them all together and that Kate now can see what she has. We get a scene with Maggie where Kate comes to request to talk and the last panel we get is the door to the apartment closing with Maggie and Kate inside.

This issue is a mixed bag for me. On its own it was and exciting issue with several fights and planning and saving the day. The problem I have is that this takes place right after the first issue of this arc five to six months in real time later. I did not remember the details of the issue after trudging through the six issues in between that was an extended flashback. I understand creative story telling however with this large of a gap I do not think that this works. I had to dig out issue #35 and skim it to see what happened to Etrigan in space and how was he separated from the others. I also had to review the Red Alice situation and the fact that in order to save her, Ragman had to snatch her soul as he would do an unrepentant villain.

I liked the action but I got lost in the details.