A Batman Bulletin from Blackest Night #5 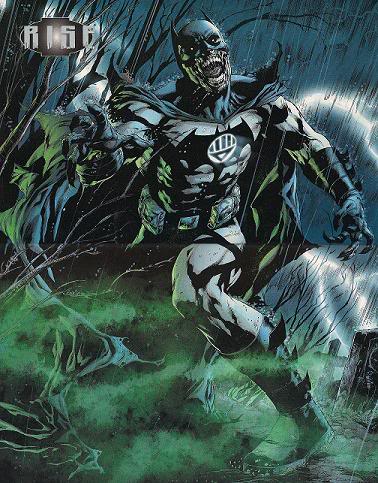 The fate of Batman finally revealed? Bruce Wayne rises from the dead? The latest horror from the Blackest Night is none other than our own Caped Crusader?

In a stunning development from the ongoing DC universe series “Blackest Night” the skull of Bruce Wayne (that was ripped from its resting place by the villain Black Hand) has now been used as the instrument to induce the deaths of some of Earths greatest heroes.

You heard that right. But let’s not get too ahead of ourselves. In the latest issue of “Blackest Night” (number 5) the arch villain, Nekron, stands astride the resting place of seven million souls that once populated Coast City the home of Earth’s Green Lantern, Hal Jordan. Seemingly, only Barry Allen stands between Nekron and the fate of our world but he is soon aided by Wally West and Earths mightiest heroes the Justice League of America. The battle hangs in the balance until these heroes are joined by the seven “New Guardians” of light (read Green Lantern #48 for more back story) led by Hal Jordan. As victory is within their grasp the grimmest manifestation of the “Darkest Knight” we have ever seen is resurrected.

People, you have to see this Cadaverous Crusader to believe it. In a two page splash Ivan Reiss, ably assisted by inkers Prado and Albert and colorist Sinclair, the guardian of Gotham takes on his most hideous incarnation ever. This Batman is both compelling and repellent. Truly, it is one of the most stunning representations of Batman to date. Worse yet, in this story Batman is used as the emotional tether that Nekron needed to bring about the deaths of Wonder Woman, Superman, Conner Kent, Bart Allen and the Green Arrow Oliver Queen. As this unholy Batman regurgitates Black Lantern rings Nekron calls those heroes to their deaths as he has held them from their everlasting demise all along.

As soon as this new gothic horror of Gotham descends upon us he is gone. Having served his purpose, “Bruce Wayne” as Nekron calls him, is banished to the afterlife once again and his connection is severed. In his wake stands a new dark vision of the JLA and the fates of Barry Allen and Hal Jordan hang by a thread.

Was this truly “Bruce Wayne”? Is Red Robin/Tim Drake wrong about his fate? What answers will be given in the delayed “Batman and Robin” issue #7 and how does it tie into Blackest Night #6? If you haven’t picked up the magnum opus that is Geoff Johns “Blackest Night” I urge you to do so. This series that was once a bit slow paced and frustrating has really taken off and may be one of the best story lines we seen in comic books in years.