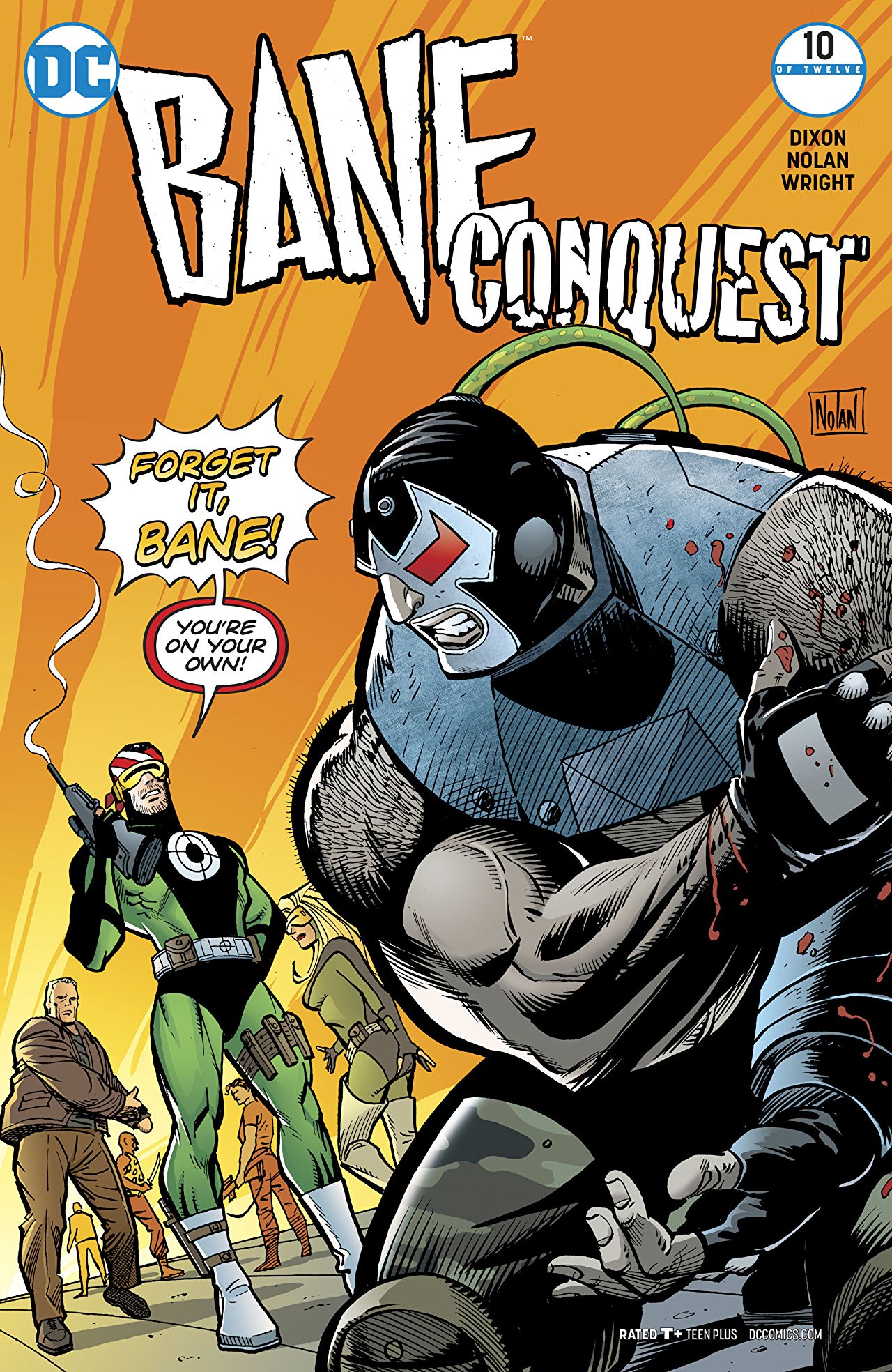 Overview: Bane gets intel to infiltrate Kobra’s base of operations by flipping a disgraced general, while Batman positions move against Bane as things come to a head.

Synopsis (spoilers ahead): Bane’s new plan is making his people anxious, but Bane is as confident as ever. He plans to infiltrate the Kobra hideout and seize the infant Naja-Naja from under their noses. Meanwhile, in Kobra headquarters, the Naja-Nana’s minder (and de facto ruler of Kobra) is going crazy with her displeasure at the lack of success in eliminating Bane to this point. When her operatives explain they have driven him far underground, she makes the (correct) point that Bane is not on retreat but plotting and scheming, looking for a way to end their death-cult.

General Han Rhee drives on the way to Rhama-Lumpur, a vacation destination for the depraved. While driving on the highway to the resort, a place where he can indulge in the pleasures denied in the terror state he runs, Gunhawk, the sharpshooter Bane has recruited, takes a well-aimed shot at Rhee’s tire, causing the vehicle to roll. Bane’s troops then pull a job to acquire the General without raising his suspicions. Once back in a hotel they assure the General that assassins from his own power circle are trying to assassinate him – Gunbunny, the attractive blonde who is both Gunhawk’s professional and romantic partner, then slowly starts to seduce and distract the weakened General with her feminine wiles, much to the dismay of Gunhawk. It quickly becomes clear that the General is not really in this for the good of his people but for access to funds and the possibility of ascending up the power structure back at home, make him ready to cough up access codes, surveillance frequencies and the like. Once the information is acquired, an amusing moment Gunhawk then takes the shot while Gunbunny is draped over the General, causing the blood to splatter over his paramour, much to her displeasure!

We then flash to Wayne Manor, where Batman, mysterious as ever in the shadows, is directing orders to Alfred who is in the Batcave. Clearly, Batman is positioning to move against Bane and his cohorts as this operation starts to come to a head – and it appears off panel that Batman may have taken out Zombie in stealth mode.

Bane is injecting more Venom in an effort to stay ahead of the game, which causes some concern amongst his lieutenants, but Bane isn’t paying attention to user reviews of his performance. Bane is starting to realize there is a spy amongst his group as he smashes a wall in anger – “The Bat is here” he intones. Surely a clash with Batman himself cannot be far away…

Bruce Wayne has meanwhile funded a massive space mission, which basically is the means by which Bane and his crew eject while in low orbit and land in the water, nearby the port of Kalju Hang. using the authorization codes acquired by the General they enter the Republic and get closer to the Kobra base. When asked if he has an exit strategy Bane assures Gunhawk he certainly does – “We kill our way free!”

Analysis: We are at the tenth issue of Bane: Conquest and the second in this arc – the sense of rising tension is really complimenting this book and making it a highlight of the month for me. By using Bane’s crew as almost POV characters (its hard not to like Gunhawk and Gunbunny for example) we start to identify and like what is essentially a fairly brutal assassination squad. There’s a touch of playfulness and cleverness to the writing which adds to the action – Bane is a somber central character, addicted to Venom and grave utterances, but his supporting cast lift and color the book out. It’s an excellent read and classic Chuck Dixon tight plotting.

With each issue I’m realizing how much I’ve missed seeing regular Graham Nolan art, he breathes life into the whole production from the engaging covers to my two favorite characters, Gunbunny and Gunhawk. I know that reading this issue I’m definitely hoping to see Bane square off against Batman in the final clash, although who knows how this one will end! Shake in your boots, Kobra!

Final Thoughts: The entertainment train continues in Bane: Conquest #10 as the action is ramping up to a violent and satisfyingly bloody conclusion! Place your bets on who will walk out alive from this one!