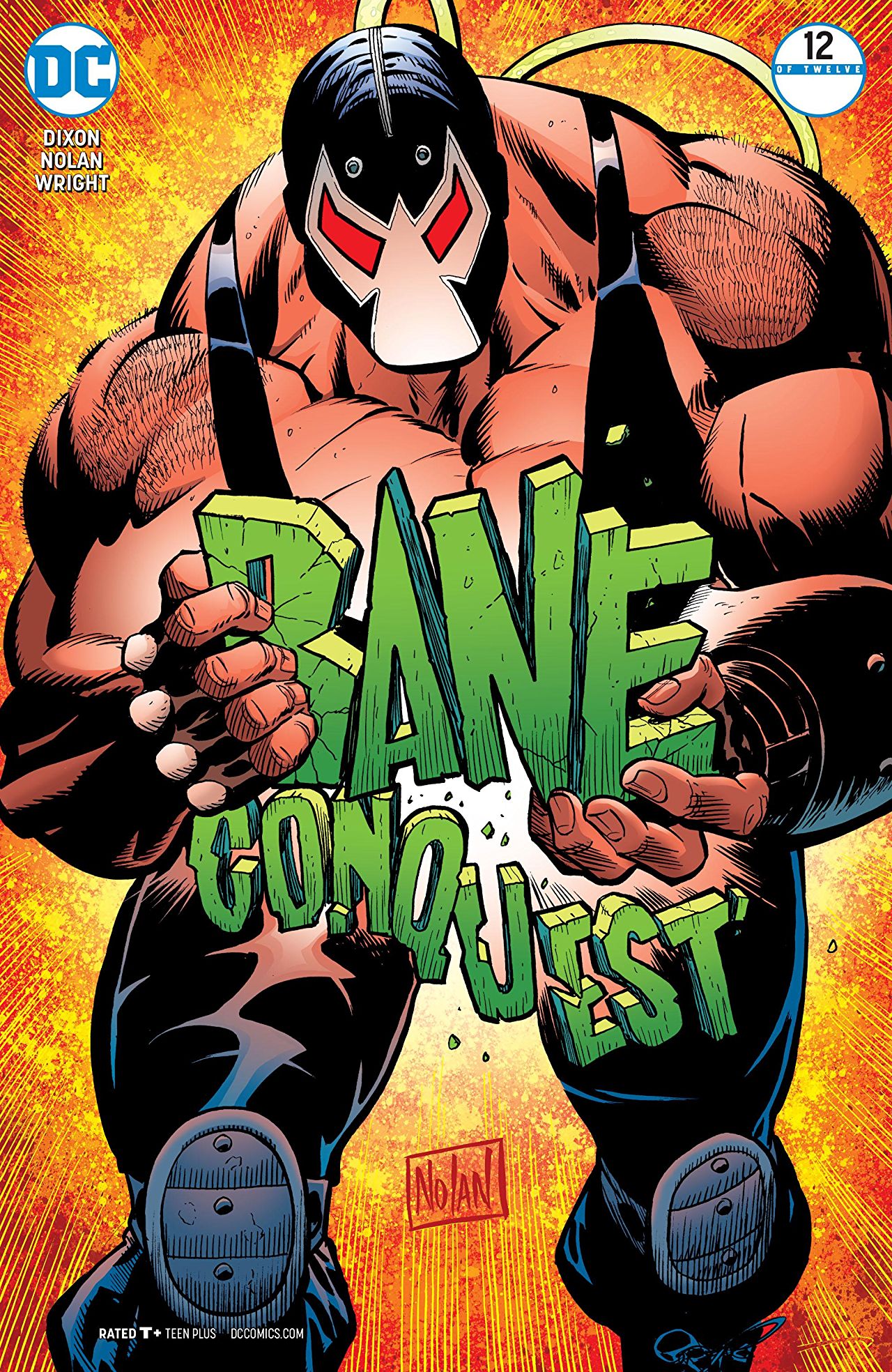 Overview: As Bane’s team fights on against increasing odds and opposition inside Kobra Mountain, Bane himself has been distracted by his premier adversary – the Batman!

Synopsis (spoilers ahead): As the gang tries to escape the Mountain, their mission blown, Bane goes to confront Batman, who has liberated the child Naga Naga. Valentina tries to run interference, but Bane is a man possessed, taking on her robo-suit, seeking to seize the child and rule Kobra from the shadows through a puppet Naga Naga! As they fight, Batman seeks to escape with the child – Gunhawk, sighting Bats in his scope, and chastened by previous defeats, (see Knightfall!) chooses an exit strategy instead of taking Batman on. Batman meanwhile has crashed the program that was being run at Bane’s headquarters by Dionysus to steal Kobra’s bank accounts – “it means we will die poor and soon,” laments Dionysus.

Bane then confronts Batman, almost dragging him into the water by his cape, but Batman escapes, with the child in hand. Bane threatens to break Batman, once again. Don’t forget – he truly did break the Bat. Batman, instead of fighting, appeals to Bane’s twisted morality. Would he destroy an innocent child? When he was once one, too? In a powerful scene, Bane tells Batman to go. He then unleashes a hail of machine gun fire at Kobra troops, when suddenly a bizarre Fourth-World kind of figure turns up, terminating the lives of the Kobra agents, and liberating Bane’s gang. It seems that the weaponry Kobra was using was not designed for them, and this figure’s ambitions are far grander and more complex.

The remaining Kobra operatives kill the talkative cult leader Rampo, seemingly ready to move on to the next phase their lives. Meanwhile in Gotham, at Saint Dismas Orphanage, the Naga Naga babe is delivered, complete with cash and a teddy bear.

Analysis: Wrapping up what has been a very entertaining arc and series, Bane: Conquest #12 does an excellent job in tieing loose ends while also giving this excellent maxi series a well-crafted ending. Surely one of the most challenging aspects of writing a Bane series is treating the villain as the hero, but Chuck Dixon has balanced this book very well, remembering that every great villain is the hero of their own story. As things come to a head this issue, and Batman and Bane confront each other, with the life of a child at stake, we get to the heart of what Bane stands for, the limit of his evil. Chuck Dixon, an experienced hand at writing Batman, is masterful as Batman confronts Bane with an essential truth about Bane – if he was once an innocent, thrown to the cruelty of the wolves, would Bane harm an innocent child, such as he was in Santa Prisca? It’s a searching question at the end of a roller-coaster action comic book, and a great scene. I can’t but feel there’s layers of more stories that could be told from this creative team – stories that deserve to be told. The appearance of the Fourth World figure, also present at the Intergang meet, was intriguing and I could read chapters of those developments! Like so many good books and comics, this leaving you wanting more in the right way.

Graham Nolan’s art pops on every page, constructing a slick action book that never lets you down or keeps you guessing – there’s a solidity and a bounce to the artwork that is refreshing and cool. Special mention should be made of the cover, also by Nolan, which again is intense and action-packed, a different flavor from so much mainstream stuff on the shelves.

If we take a moment to appreciate Bane: Conquest for what it was, the return of two legends to the character they co-created, it was extremely satisfying and cool to see this team still at the peak of their powers and right in the groove, delivering like the mailman.

Final Thoughts:A great concluding chapter to what has been one hell of a fun title! This is one ride I’d like to go on again! More Chuck Dixon and Graham Nolan, please DC!