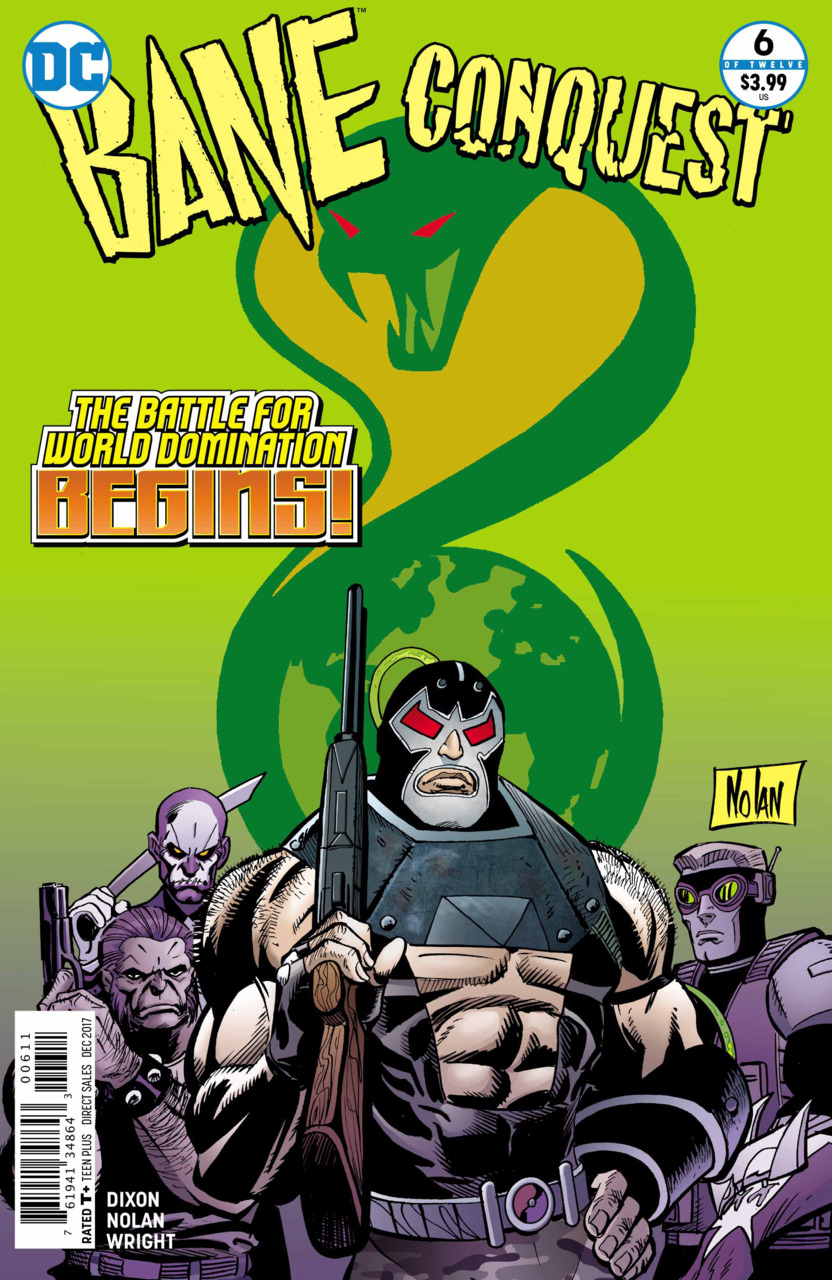 Overview: Bane goes after the head of the international crime cult Kobra, a playboy known as the Naja-Naja!

Synopsis (spoilers ahead): Fresh off the last arc winding up, The Serpent story line kicks off in Cannes, with a stylish playboy driving in a convertible with a beautiful woman, pulled by a tractor beam into a transport shuttle! It quickly becomes clear this is an abduction – the stylish playboy is the Naja-Naja, the amoral head of a sinister criminal conspiracy/cult known as Kobra.

Meanwhile, Bane is wreaking a terrible vengeance on the criminal underworld as he seeks to overthrow the old criminal networks of Black Dragon triads and the like, as Bane seeks the throne of control for himself. Using Dionysus as his head interrogator, Bane uses the knowledge gleaned from the captured Black Dragon member to piece together the existence of Kobra, a nexus point of criminal activity, a strange organization that all the global criminal networks pay tribute to. Dionysus explains the robins of this strange cult, which has existed since the time of the Pharaohs! They serve the Naja-Naja, their ruler and demi-god, a position inherited at birth, which transfers only at point of death of the old Naja-Naja to an infant born in the same moment.

While Bane crew share their doubts on both the reliability of Dionysus as an information source and the whole Kobra cult itself, Bane and Dionysus clue onto the fact that when the Naja- Naja dies, Kobra is at it’s weakest – and Bane being Bane, figures he can make this happen.

The current Naja-Naja, the flashy playboy mentioned above, is a bit of an adrenaline junkie, causing his Kobra handlers no end of problems as he insists on going to a yacht show, seemingly more concerned with his own celebrity and access to the finer things in life, than he is worried about the portents of the cult which spell disaster.

Despite Bird’s misgivings about the whole deal, a brooding Bane decides to go after the Naja-Naja. Leaving Zombie behind, Bane and his crew seize the Naja-Naja from a party on the docks, and Bane accelerates into the ocean with his captive, only to run aground onto a Kobra sub! Tune in next month kids!

Analysis: There’s a durability and an assurance about the storytelling in Bane: Conquest, which is no surprise given the creators involved, but with the slick action beats and a neat cynicism among Bane’s crew to all this Naja-Naja mumbo-jumbo I might have just found my favorite issue of the month! With a fresh arc starting inside this twelve-issue maxi series, the series gets an extra charge of life as Bane expands his horizons beyond Gotham. The story moves at a fast clip, highlighting the tensions that still extend within Bane’s squad – it would be a very optimistic person who truly believes Dionysus won’t try and back-stab them again, after being barely defeated last issue.

Nolan’s art features an ominous Bane from his first appearance on page, with the mask, and if this whole issue feels like a throwback to Batman comics from years past, it’s a welcome throw-back to a period where a premium was put on clear concise action-based storytelling, and DC are wise to be green-lighting this kind of material. As I’ve often said, there’s room for more than one kind of meal at the table. If you enjoy the Bat Universe, you should be reading Bane Conquest.

Final Thoughts: A fine entry in a cool new arc for Bane: Conquest. With fast-paced action and a slice of humor, Chuck Dixon and Graham Nolan are turning the adventures of Bane into a MUST-READ!