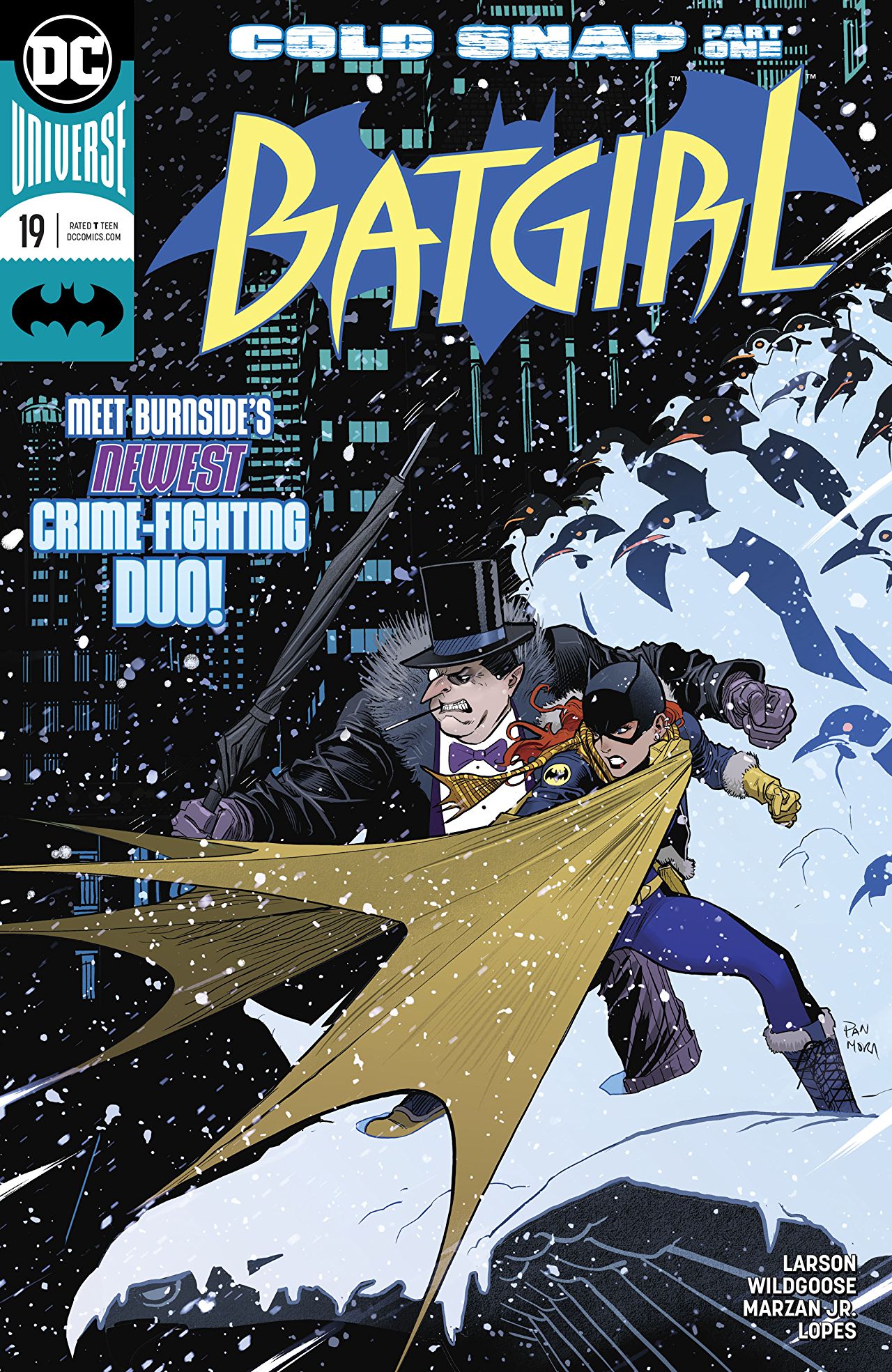 Synopsis (spoilers ahead): Batgirl is on her patrol of Burnside when she interrupts what appears to be an attempted assault. A trio of young men have entered a family owned donut shop and are threatening them to close down. After Batgirl hits them a few times, they reveal that they are just actors and not gang members. They came there to threaten the shop to close down because one of their girlfriend’s owns a shop in the same neighborhood.

Later in the morning, a very tired Barbara, Qadir and Frankie are having breakfast at a diner. Qadir mentions that he has a cool, secret new job. Frankie is distracted by the fact that there is unscheduled snow outside. Qadir is summoned to his new job and Barbara and Frankie continue to discuss the random snow fall. Unfortunately, it’s no passing snowfall and on the following day, Burnside is buried in snow. The citizens of Burnside are all out helping clear the snow while a news reporter describes the scene. Penguin then arrives with some cronies and claims that he’s there to help the citizens of Burnside deal with the snow. Batgirl is skeptical, but the mayor convinces her that they need Penguin’s help because the city’s winter preparedness budget was cut. Batgirl mentions to the mayor that the blizzard is suspicious because no one seemed to know it was coming. She decides to go investigate.

Batgirl’s first stop is the Burnside Federal Building where she pays a visit to the offices of the American Weather Administration. The worker she talks to explains that the satellites are showing clear skies despite the obvious inclement weather outdoors. Batgirl uses a computer terminal to figure out that there’s a worm intercepting the data from the satellites and replacing it with fake data. The worker reveals that they were a little lax in their watch on the server room and Batgirl decides to go take a look for clues. In the server room she finds a spur that reminds her of an environmental saboteur she foiled with Supergirl some time ago.

She pursues the lead to an old stockyard where she bursts in on a trio of men from an organization called S.P.U.R playing a board game. The trio claim innocence and that they are being framed for the crime, but they still decide to engage Batgirl in a fight. The fight ends quickly as the men are over matched and one member accidentally brands another member on the buttocks. As the men squabble amongst themselves, Batgirl receives a text from Qadir that the secret government lab he works at is being robbed. Batgirl hypothesizes that the pursuit of S.P.U.R might have been a diversion to get her out of the way so that the criminals can rob the lab. She gets into her Bat-snowmobile and races off to save Qadir.

Analysis: When I’m reading good superhero comics, one of the things it gets me to do is suspend my disbelief so I can actually buy into the story. I really struggled to do that with this issue because the numerous plot holes really took me out of the book. I try not to take these stories too seriously because they can be tongue in cheek a lot of the time, but even with that said, there were way too many things that didn’t make sense or were too convenient in this story. For example, right on the first page, Batgirl stops an assault by miraculously being right on top of the building the second it happens.

The whole incident with the donut shop takes up three pages of the issue and appears to have no impact on the main story. The objective of this introduction seems to be about making a point about the gentrification of urban areas. This is not the only message Larson seems to be trying to get across in this issue. The organization of S.P.U.R also appears to be an attempt at representing far right wing policies. This book also has a strong environmentalist slant as the head of the American Weather Administration being a climate change denier is a significant plot point. In my opinion, this is a very obvious shot at the Trump administration appointing a climate change denier to be the head of the EPA. While I personally, mostly agree with Larson’s stance on these issues, I do not think these issues were included in this story in a subtle or organic way and I think many of them were gross oversimplifications. It felt a little blunt, almost like the story was forced to fit around these particular points and that really hurts the quality of the story.

The one laugh out loud moment I had in this issue is when the AWA employee refers to his boss Denis Albraugh as Deni-Al. Larson is usually good at providing one of these humorous moments every issue. I liked Wildgoose’s character design for the AWA employee because he really looks like an exaggerated version of a Silicon Valley type, but I thought some of his dialogue was quite strange. I also found it odd that Barbara was boasting about writing the security code for Arkham when that might not be something to be proud of given how often patients escape. I also feel like the security wouldn’t be so terrible if Barbara actually wrote the code herself because she is so highly competent. I also liked Batgirl’s winter jacket and snowmobile. Both seamlessly mesh with her costume and color scheme. Lopes’ colors were great as always although the S.P.U.R agents could have been a bit less bland.

Final Thoughts: This issue really didn’t resonate with me. I struggled to get into the story and found the inconsistencies and plot holes to be distracting. In the next issue we should get answers about Penguin’s potential ulterior motives as well as more information about Qadir’s top secret job. So far we have no idea what the larger plan here is, but I’d be willing to bet that Penguin is trying to benefit somehow.