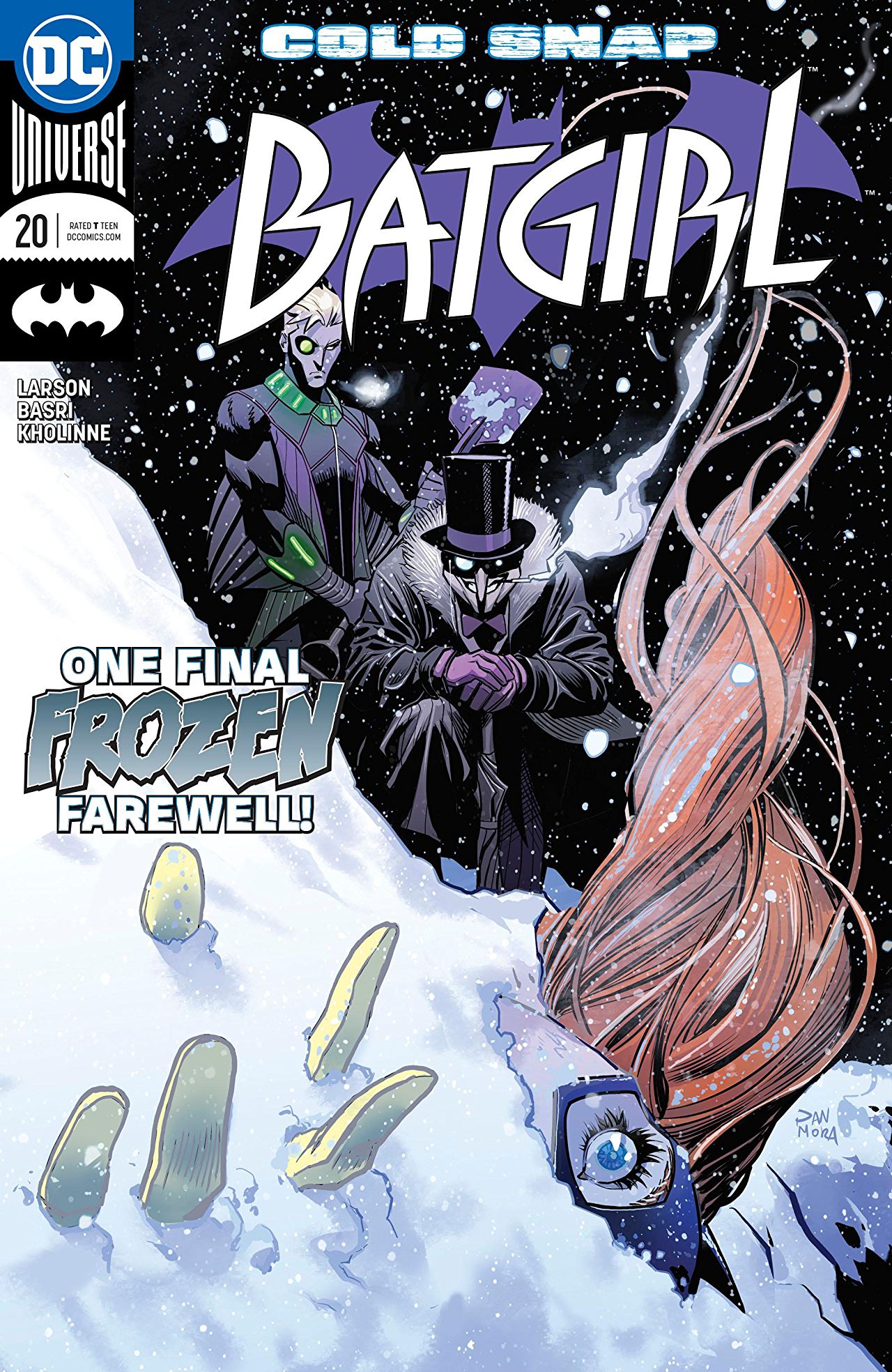 Overview: Batgirl has a run-in with an old flame up to no good, as she recalls some of the good and not so good times she has had in Burnside.

Synopsis (spoilers ahead): Batgirl is driving a snappy ski-car through a wintry Burnside. She is looking for Qadir’s lab using an address he gave her. Unfortunately, along with the weather satellites, the GPS satellites have also been hacked. Barbara has to rely on her super memory to figure out the location of the lab. As she drives through the empty streets she recalls some vivid memories of her life in Burnside, both good and bad. She reflects on how much she has changed since she moved here.

She finds the lab and goes inside to find Qadir knocked out on the floor of the lab. There are bookshelves and papers all over the place, the lab has been attacked. Qadir confirms the attack and that the assailant took project 760-B  which uses radio waves to make a person seem more trustworthy to folks in the immediate vicinity. Batgirl lets Qadir know that she is surprised he is working on such a morally gray project.

She checks out the security video and recognizes the attacker’s voice as Ethan Cobblepot’s, Penguin’s son, also known as Blacksun. Ethan had disappeared from the hospital where he ended up after his fight with Batgirl. She posits he is to blame for the satellite problems and wonders why he wants to use a ‘trust ray’.

Because of the snowstorm, Gotham is in the midst of a public health disaster. But Penguin has generously opened the doors of his club the Ice Float for use as a public shelter. Batgirl expresses her skepticism of Penguin’s community-minded actions to the Mayor but he is unusually trusting of Cobblepot.

Batgirl realizes that Penguin is using the trust ray that his son stole. She has to find the location of the ray. She sets out sensors to pick up the ray’s frequency and triangulates the location. It leads her to a storage room in an abandoned office building. The room is full of Cobblepot for Congress material. Blacksun appears masked and in costume. Penguin is running for Congress and he is going to be his Dad’s campaign manager.

The two fight and Blacksun hits her with energy beams from his hands setting some boxes on fire. He then locks her in the room and leaves. She uses liquid nitrogen to freeze a portion of the door which she breaks like brittle ice and frees herself.

Penguin is at the Ice Float giving a speech, he wants people to vote for him for Congress. Batgirl knocks Blacksun down and causes the trust ray machine to break down. The two crash into the stage. Penguin says he has nothing to do with the ruckus but Batgirl opens his shirt to reveal the ray generator. Penguin is upset at his son and the three all get into a struggle against each other. The cops arrive and Batgirl punches Blacksun’s mask off his face. Ethan is terribly scarred from his previous run-in with Batgirl. The GCPD leads the two Cobblepots away to jail.

Barbara looks at herself in the mirror and thinks about how much she has grown up since she came to Burnside. She isn’t a kid anymore. And she doesn’t want to be. Until next month…

Analysis: Writer Hope Larson gives us a fairly straightforward Penguin and Son action story. Barbara uncovers some bad behavior, figures out who and why, and stops it. Boom, boom, boom.

Where this story shines is the self-reflection of Barbara. She remembers her past in Burnside and how she has changed, this is a relief from some of the punch heavy stories out there. There is also humor, when she goes to the wrong location because the GPS systems are down it turns out she is brought to a warehouse full of bat guano. Barbara also calls the trust ray a “build-your-own-cult starter kit”. Also, when she tells the Mayor that something smells fishy he points out that Penguin’s club is full of fish.

Artist Sami Basri, colorist Jessica Kholinne, and letterer Deron Bennet give us a well put together book. As Batgirl drives around the Burnside streets there is a map like graphic behind her, reflecting her memory of her route. As she drives, she sees past events and they can be distinguished by a blue tint to the characters and the lettering. It is good storytelling.

Overall though, the action portion of the story is just OK. It is a good idea to have included her old boyfriend Ethan since much of Babs’ internal dialog is about her past. But she never really seems to be in danger and the crime is pretty pedestrian and taken care of quickly.

Final Thoughts: This standard-fare Batgirl story has some nice touches that humanize Barbara Gordon with a straightforward action plot that won’t thrill, but won’t disappoint either.