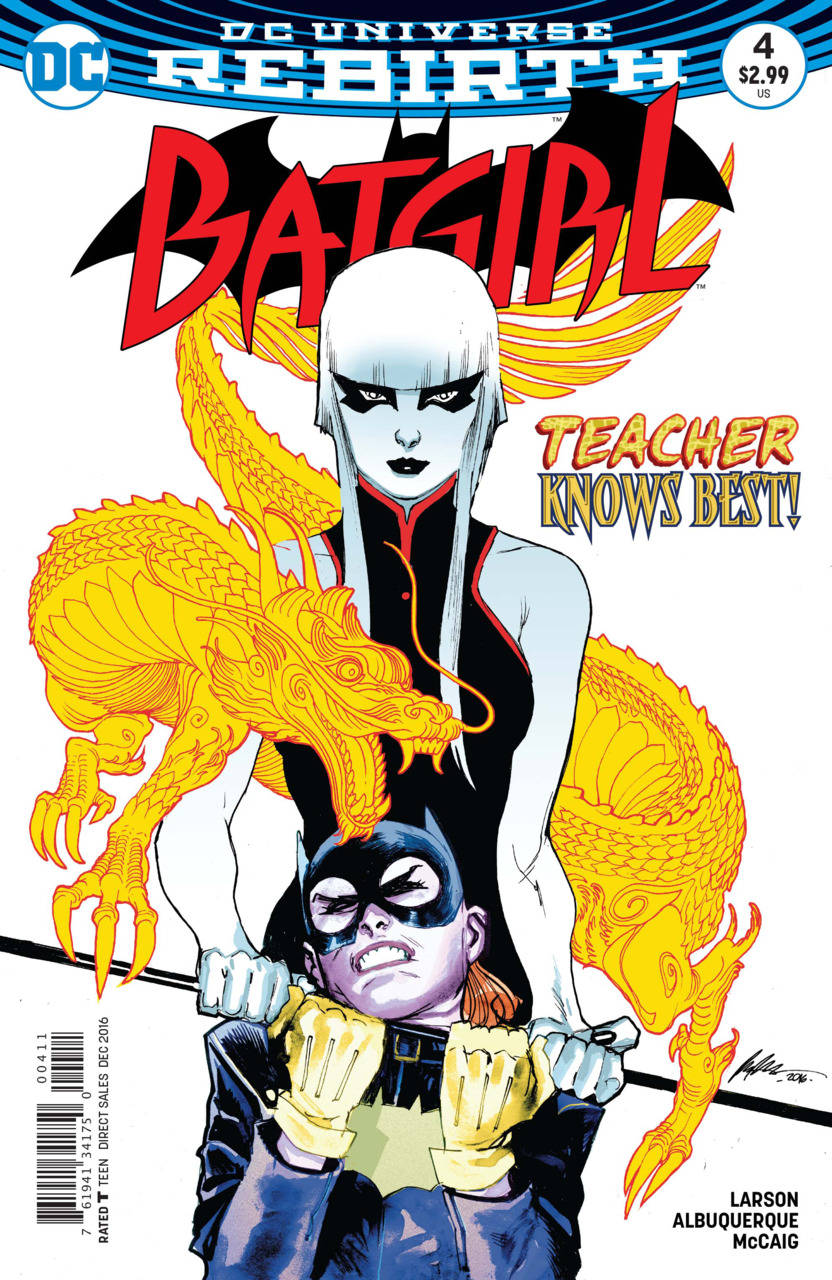 In Brief: In the penultimate issue of her Asian tour, Batgirl tracks Teacher down to her lair.

Summary (Spoilers): In an empty building, Batgirl (Barbara Gordon) takes on three pupils of the mastermind villain Teacher. She learns that Teacher has promised them the chance at retaking the test that allows them to go to college, using the bacteria Kai is transporting to boost their intelligence. Instead of wasting time fighting them, Babs uses a smoke bomb to escape, and desperately rushes to Shanghai, where Kai has been beaten and his bacteria stolen by Teacher. Given her lack of resources, she calls Frankie for an update from last issue, and learns that Teacher is likely a colleague of the developer of the bacteria, which has some life threatening side effects to the intelligence boost.

Finding Kai in a hospital, Babs pays him a visit in the evening as Batgirl, promising to sort out his debt to the gangs who wanted to buy his bacteria, but telling him to cut off all ties with her civilian identity.

Using some of her Oracle skills, she manages to find Teacher’s method of recruiting online, and tracks her to a lab. She destroys a vial of bacteria in Teacher’s hands with a Batarang, which appears to knock the villain out. However, Teacher rises to fight with an evil gleam in her eye, saying “Now I know how it feels to be alive.”

In Depth: Hope Larson’s run on Batgirl continues with a strong focus on Batgirl’s top-tier hero status. Though she does rely on her team, like Frankie, for backup, scenes like her confrontation with Kai in the hospital show how much she’s learned from Batman. The evening visit, hard attitude, and ruthless control of her own emotions and desires to control the situation for the greater good firmly establish her skills and experience.

Though Rafael Albuquerque will be leaving in two issues, his work establishing Batgirl as one of these heroes is significant. His bold lines, sense of panel design, and brilliant work with colorist Dave McCaig to keep the tone of the book light but not frothy have propelled this arc and title forward, and hopefully given Barbara the recognition she deserves. Albuquerque’s always been gifted with the grotesque, as seen in his work with Scott Snyder on American Vampire, and his designs for Teacher and her pupils are inventive and full of personality.

Continuity cuts referring to Babs and Frankie’s past history, such as their battle with Fugue from Batgirl #50, reinforces the feeling that Larson is continuing rather than relaunching the Batgirl narrative from the last volume. Though Babs’s little trick at the internet cafe shows she still has her Oracle skills, it’d be nice if we got some references to her pre-Flashpoint history as well as her pre-Rebirth adventures. On the whole, however, Larson’s managed an excellent job keeping the tone appealing to the Burnside demographic without falling into some of the pitfalls of the previous run, such as Babs’s passive or reactive stance in her hero identity, or her inability to take control of her life.

Pick up/Pass? As this arc draws to its climax, the art and writing make a strong case for picking up!

In Conclusion: Barbara Gordon stakes out a place for herself as one of the Bat-Family’s strongest members, both in mind and combat, as she rids Asia of a pernicious super villain’s gang.