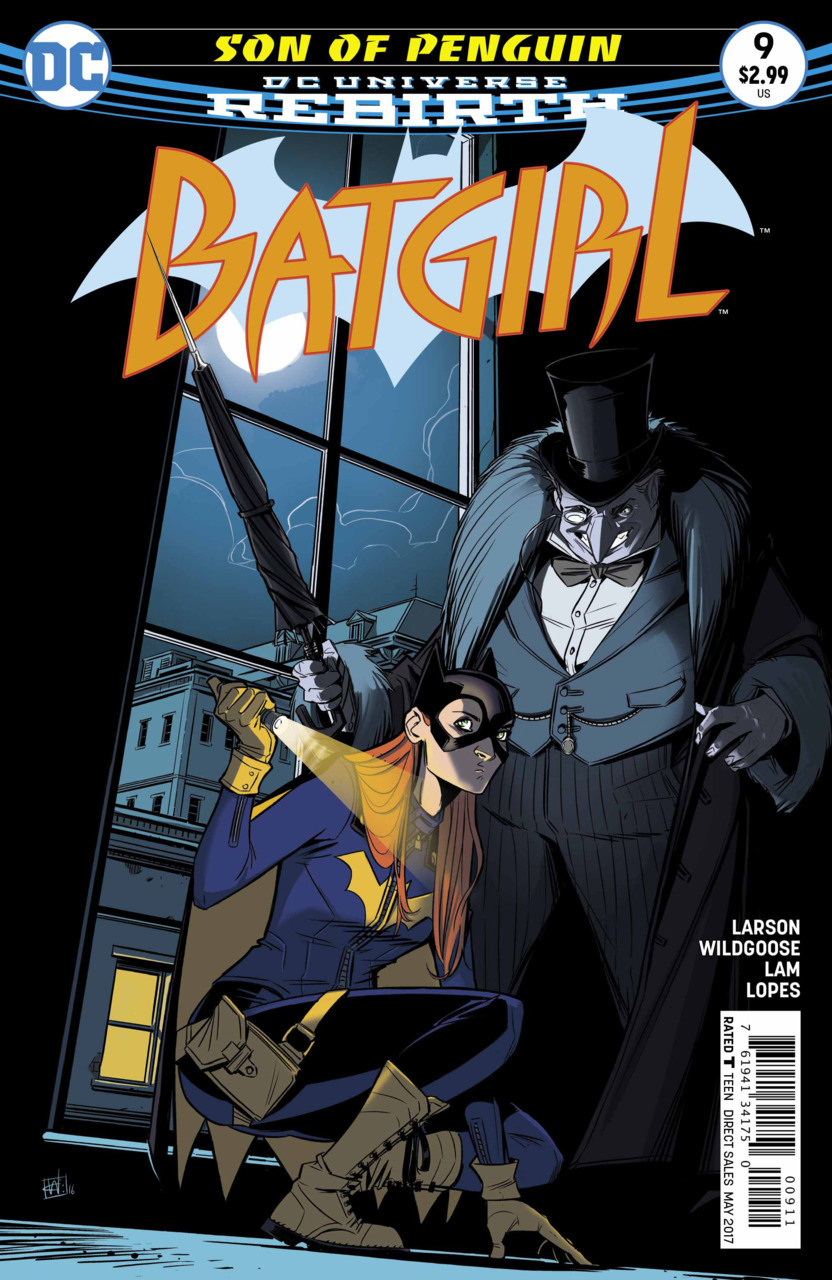 In Brief: The Son of Penguin’s plans for Batgirl take a darker turn as Babs struggles to balance her life.

Summary (Spoilers): Batgirl foils a delivery girl freelancing as a stick-up artist, then rushes to her coding workshop volunteer gig, where she teaches her virtual dog app-engrossed pupils about data mining and electronic privacy. The Doggo app is another production from her romantic interest/investigation subject’s Ethan Cobblepot’s company Vicform, pinging Babs’s Batty-sense.

Babs walks home, finding Alysia sniffling on the steps, having cold feet about having a kid with Jo. Babs says Alysia always has a place to crash with her, though she worries about her living situation now that Frankie has moved out. Her library school paper proves difficult to focus on, so she attempts to turn off her eidetic memory to hyperfocus, as she did in the last arc. Frankie breaks Babs’s meditation with a call about the Doggo app being used to track Batgirl. As if on cue, Ethan invites Babs to a charity masquerade ball at the modern art museum, and Babs abandons her paper for snooping.

Ethan and Babs chat, Babs probing for intel. She asks if her invitation was just to improve Ethan’s public image, to which he responds by dodging into a corner with her and making out. He tells her he bought her a toothbrush for his place, leading to Babs thinking about breaking it off with him. Taking advantage of Ethan’s distraction with the press, Batgirl breaks into Vicform headquarters, only to find a tussle with two of Penguin’s henchmen. The mob boss and love interest paternal unit tells Batgirl he isn’t involved with his son’s plans, instead offering a game of Ping Pong to the Dashing Daredoll…

In Depth: The middle of Hope Larson’s second arc faces some of the same problems as the middle of her first – disconnected action sequences, disbelief-stretching elements, and irrelevant civilian drama – but also many of the strengths – a likeable voice for Babs, and a sense of mounting stakes. The opening action sequence has no connection to the ongoing plot, and while seeing Babs show her skills is always fun, it puzzles this reviewer, since the conclusion of the issue already provides the contractually required Batgirl mask-time. While Babs’s volunteering continues to provide both an appealing character connection with our heroine and her students as well as introducing new nefarious plans by Vicform via apps, the Alysia plot, just as last time, indicates Larson continues the pattern of Simone in not knowing what to do with this now long-standing member of Babs’s supporting cast. At least the Burnside team decided to give her responsibility as the head of Babs’s Gordon Clean Energy company, which could provide some plot connection as another tech startup competing with Vicform, but Larson chooses to present a completely disconnected plot. While understandable and very human, Alysia doesn’t win many points in this section of the story.

Adding to the general malaise of Babs’s personal life as fodder for narrative energy, Babs’s relationship with Ethan remains on the level of her fling with Kai last arc – almost purely about their “chemistry,” with no potential for a long term relationship. Solicitations for Larson’s next arc are starting to pop up, and as of yet there is no third love interest popping up. Let us hope the situation remains so! Babs’s heart (and the reader’s patience) could use a break.

Christian Wildgoose’s art remains a huge asset – incredibly appealing, polished and assured. His figures move around the panels with character and definition, and the expressions lend even the weakest plot elements connection with the reader. His rendering of Ethan’s mask evokes the recent Telltale Batman video game version of Penguin – hovering between sexy and terrifying, with its long beak. The two fights Batgirl faces in this issue are clean and stylishly laid out, without too many improbable action poses. All in all, Wildgoose is a major revelation as the artist for Batgirl – hopefully he’ll stay on the title for a while, and when he’s finished, will get another project worthy of his talents.

Pick up/Pass? Excellent art and strong, if inconsistent, writing make this still a pick up.