A Look at 700 Issues of Batman

Despite the title, we are not going to look at all 700 issues of Batman. Today marks a very rare occasion in comics. A comic book series makes it to seven hundred issues. Very few series can last that long, much less the character still stay interesting. Batman is obviously one of the more popular characters no matter what company's comics you read. Batman also has the current longest running series with Detective Comics. I want to take a look at some of the covers for issues over the years and give you a little history lesson. Batman #1 came out in May 1940. At the time Batman was published quarterly. Batman was appearing in not only Detective Comics, but also his in a series named after himself. This cover has been copied and reimagined over time. The latest issue that paid homage to this was Batman #686 by Andy Kubert. Batman #100 was released in June 1956. At this point the book was now bi-monthly. This issue is only a collection of the various issues that preceded it. 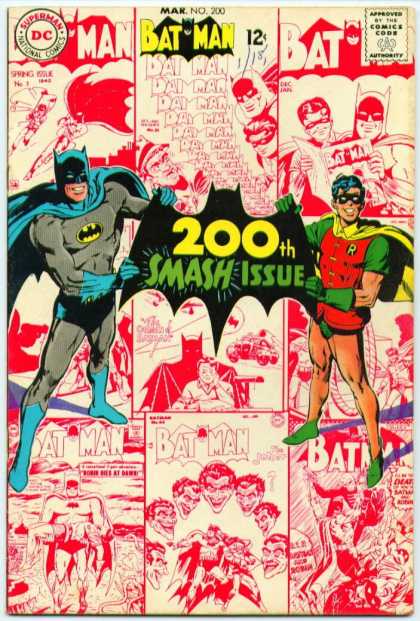 Batman #200 was released in March 1968. The issue again used a college of covers to celebrate the "Smash" issue. The issues were now coming out monthly and would continue to do so.

Batman #300, from June 1978, steps away from the group of covers to a unique cover that deals with a special story. Can the world survive without Batman? This is one of my personal favorite stories, because it takes the future of what could happen and let the readers believe what is possible. It gives the readers an idea of what lies ahead for our favorite characters that have had very little life changes over the past thirty years.

Batman #400 came out in October 1986. Comics were starting to become mainstream in the media. With the Superman films coming out years before, people were starting to pay more attention to the little books that they read as children. 1986 was a big year for Batman comics. It was only months after Frank Miller's The Dark Knight Returns was released. Batman: Year One was months away from coming out within the pages of Batman. A group of the biggest names in comic art were featured in the issue. It even had a introduction by Stephen King.

Batman #500 came out during the peak of comic collecting, October 1993. The Death of Superman came out and everyone was buying comics. It didn't matter if there were five different covers came out, you bought them all. Above is the special foil double cover. Foil covers were also huge at the time. Coincidently, this cover was drawn by the future head of Marvel, Joe Quesada. This issue took place in the middle of the Knightfall storyline, but they were still able to celebrate the achievement of five hundred issues. Batman #600 was released in April 2002. This issue makes me a little upset. At the time, the story arc crossing the various titles was Bruce Wayne: Fugitive. Instead of even making it aware that it was a special issue, they pretended as if it was a normal accomplishment for comics to get to six hundred issues. The cover is nothing more than what we would find on a normal number issue.

Finally, we come to Batman #700. There will in fact be one cover, but also a variant for every 25 copies of the normal cover. The variant cover was drawn by Mike Mignola and is modeled off of Detective Comics #168. The normal cover was drawn by David Finch. DC takes us back to the time of anniversary issues with the over-sized issue. We will see all three Batmen that we have grown to know over time; Bruce Wayne, Dick Grayson, and Damian Wayne.

So whatever, anniversary issue you are most familiar with, be sure to head to the comic shops today and pick up the latest issue of Batman.