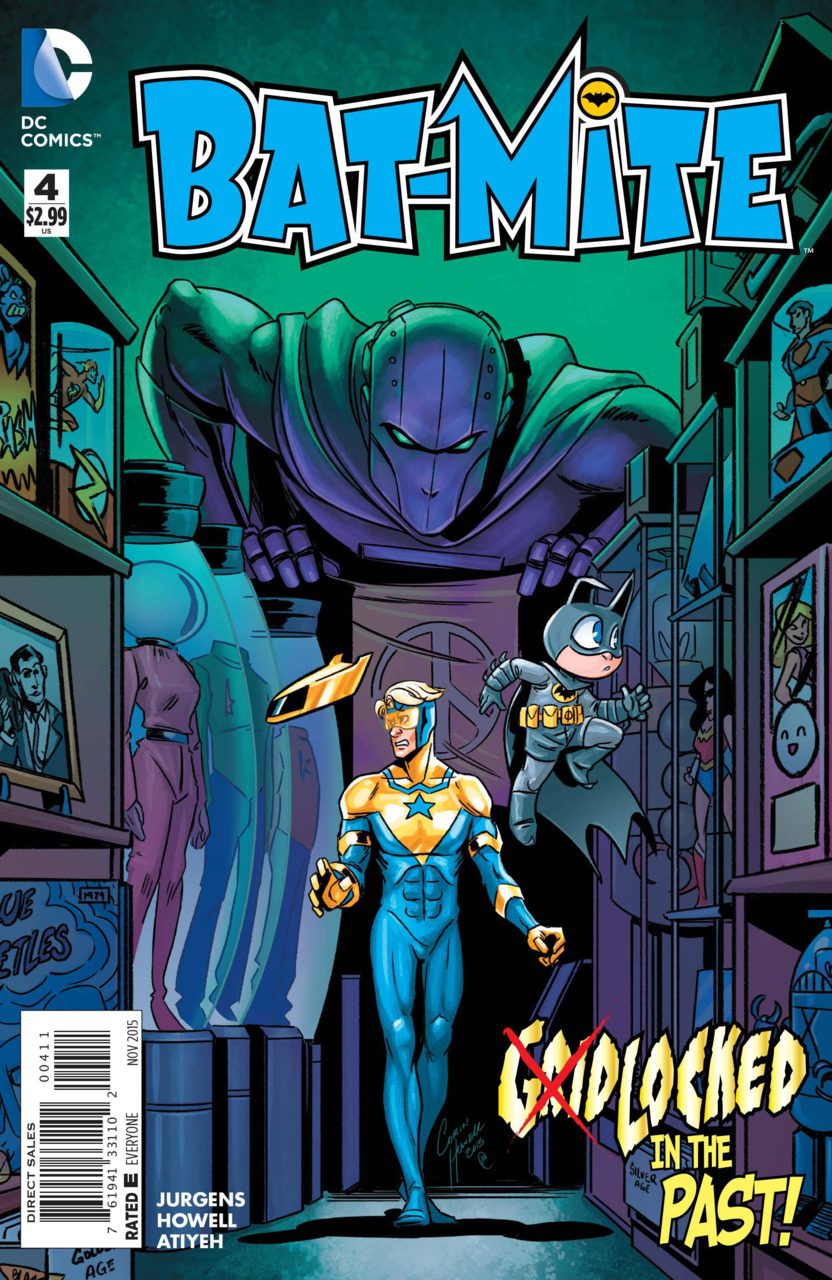 The issue begins with Weed and Reagan coming back to the apartment discussing the consequences of living with Bat-Mite. Reagan is listing all the things he has broken when they walk in on Bat-Mite putting out a fire in the kitchen. It is clear that he started the very fire he was “saving” everyone from.

Reagan becomes furious when she realizes her photo album had been destroyed in the fire. She yells at Bat-Mite that he ruins everything before storming out of the room. As Weed tells Bat-Mite that he screwed up, the doorbell rings and it is Booster Gold’s security droid “Skeets” on the other side.

Booster and Skeets explain that they are looking for Bat-Mite’s help in taking down Gridlock, a villain that Bat-Mite has encountered in previous issues. Skeets gives a brief background to Gridlock and what his plans are for distorting time itself. Bat-Mite seems willing to help but feels Booster is in desperate need of a “makeover”. Bat-Mite then changes Booster Gold to have an all black outfit and new look with the new name “Black Gold”.

Bat-Mite explains to Booster that, with this new look, he needs to be darker and more intense for the fans. Booster reminds Bat-Mite about the threat of Gridlock to which Bat-Mite immediately teleports to inside Gridlock’s lair.

They find the lair to be more of a museum that holds perfectly maintained items from a certain time period. Skeets analysis of the items reveals them to have been frozen in time. Gridlock arrives and attacks Bat-Mite and Booster Gold (“Black” Gold I mean).

During the fight, Booster gets paralyzed by Gridlock’s touch because Bat-Mite forgot to include Booster’s force field design from his previous suit. Bat-Mite uses a “batzooka to fire at Gridlock and destroy part of the lair.

Skeets convinces Bat-Mite not to fire another bazooka round at Gridlock and to change Booster back to normal. Bat-Mite does so just in time for Booster to use his force field to protect them and all the perfectly preserved items. They all realize that, despite saving all the items, Gridlock did escape.

Back at the apartment where this adventure began, Bat-Mite is nervous about going back inside after what he had done to the kitchen and photo album. Booster Gold appears holding the photo album that he rescued in the past before the fire that Bat-Mite started.

Bat-Mite then goes inside just as Weed was realizing that the photo album was gone. Bat-Mite presents the rescued photo album to Reagan who is overjoyed and says that he can stay forever. On the news, a new anchor is reporting the crimes of a group known as The Inferior Five. Bat-Mite looks excited and ready to move on to fight this new foe.

I had a few gripes with the pacing of this story in that most of it felt like Booster Gold and Bat-Mite argue over the rooftops of the city. Despite the story having a lot of jokes, I only had a few chuckles. Most of the jokes I do not believe a lot of kids would get which still leaves me wondering whom this book is being marketed to. Many of the jokes and plot points (fans wanting “darker” heroes, mint condition merchandise, etc.) seem like something that would go over a kid’s head.

The artwork is very good and I feel like I am watching a Saturday morning cartoon. The facial expressions on Bat-Mite were always entertaining and artist Corin Howell conveys a lot of emotion from how she illustrates the characters.

Overall, I had a few laughs with this issue and it was a nice change-up to my current run of comics I usually read. The simplistic plot line does play nicely into what a kid could follow when reading this but the jokes seem to target older audiences. It is certainly not my first choice of comic I would grab but it has its merits.