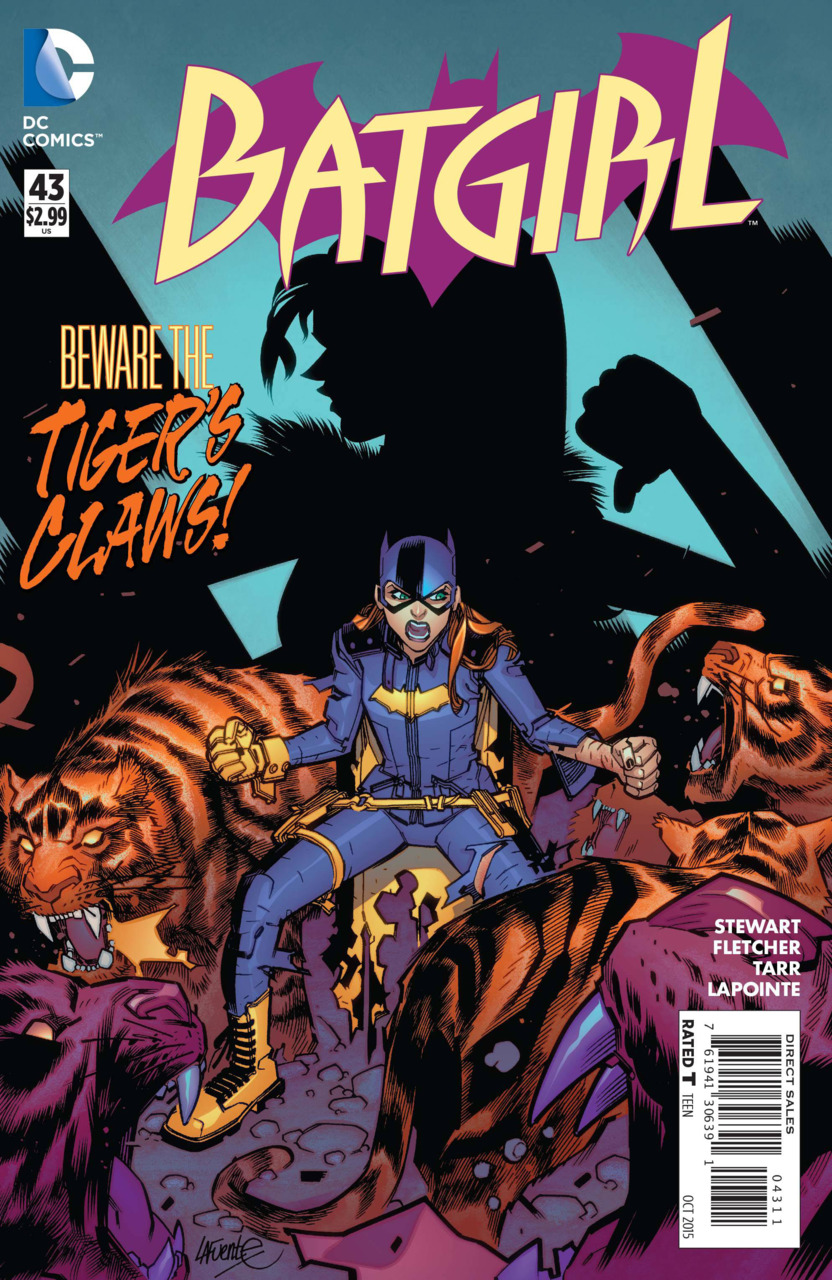 THE PLOT: Batgirl investigates a series of vicious tiger attacks that have been plaguing Burnside, all while trying to organize her ex-roommate’s wedding!

MY THOUGHTS: This issue is why people like Spider-Man.

Well, In addition to the powers, motivation and villains. No, it’s the supporting cast.

Actually, it’s a hallmark of a lot of great comic books.  A reliably fun supporting cast can enlarge the world the hero lives in, add some variety and keep our attention going from one subplot to the next. It’s what I liked a lot about the Chuck Dixon Robin comic. And the Chuck Dixon Nightwing comic.

It’s also what was lacking in the previous Batgirl run. Not to keep harping on that era, but despite the number of characters Gail Simone introduced, they really didn’t go anywhere when it came to development. Here, this issue sees Barbara interacting with nearly everyone she’s met since the new era began and it makes the story. We have Quadir under suspicion, Frankie vying to be more involved as a crime fighter, Jeremy Groot going through ex-girlfriend trouble, Alysia gearing up for her wedding and Jo involved with Velvet Tiger.

Oh yeah, and Batgirl’s in here too somewhere.

Actually this book hardly gets away from Barbara, which is the smart thing to do. Keep her as the reader’s avatar for interacting with this new world so it grows on her as well as us. After almost a year in the Burnside Batgirl era, the supporting characters have earned our (or at least my) interest and I’m especially interested when they’re up against a wall.

Frankie’s plot was the most prevalent but I was more engaged with Quadir’s plight. Not only is he suspected in a crime, but he’s clearly fallen for Batgirl and is made aware of this Barbara Gordon’s consistent talent to hook any guy who happens to walk in her line of vision. I was unaware that Luke Fox knew her identity as the previous Batwing hadn’t, but that does make for an interesting potential love interest. But poor Quadir is put in the position of the nervous, jealous type so I hope things will work out for him.

Frankie’s plot of wanting to be more in the field as a crimefighter is one we’ve seen often in these types of stories, but the painful difference here is that she needs crutches to get around. I don’t know how she thinks she can get beyond that, because otherwise she has exactly as much right to put on a costume as Barbara did. I’m left thinking she might be set up to die, so I’m wondering what tragedy will inevitably befall her should that not come to pass.

Speaking of tragedy, it was made obvious that whatever was making Jo all flaky was something not good so her capture at the end by Velvet Tiger may end up in her death. That’d be decidedly dark for this run of Batgirl, but seeing as how marriage is forbidden in DC Comics I can’t say it’d be beyond their wheelhouse of writing. Just ask Earth-2 Alan Scott.

This was another solid one, with the best thing about it being the showcase of supporting characters.