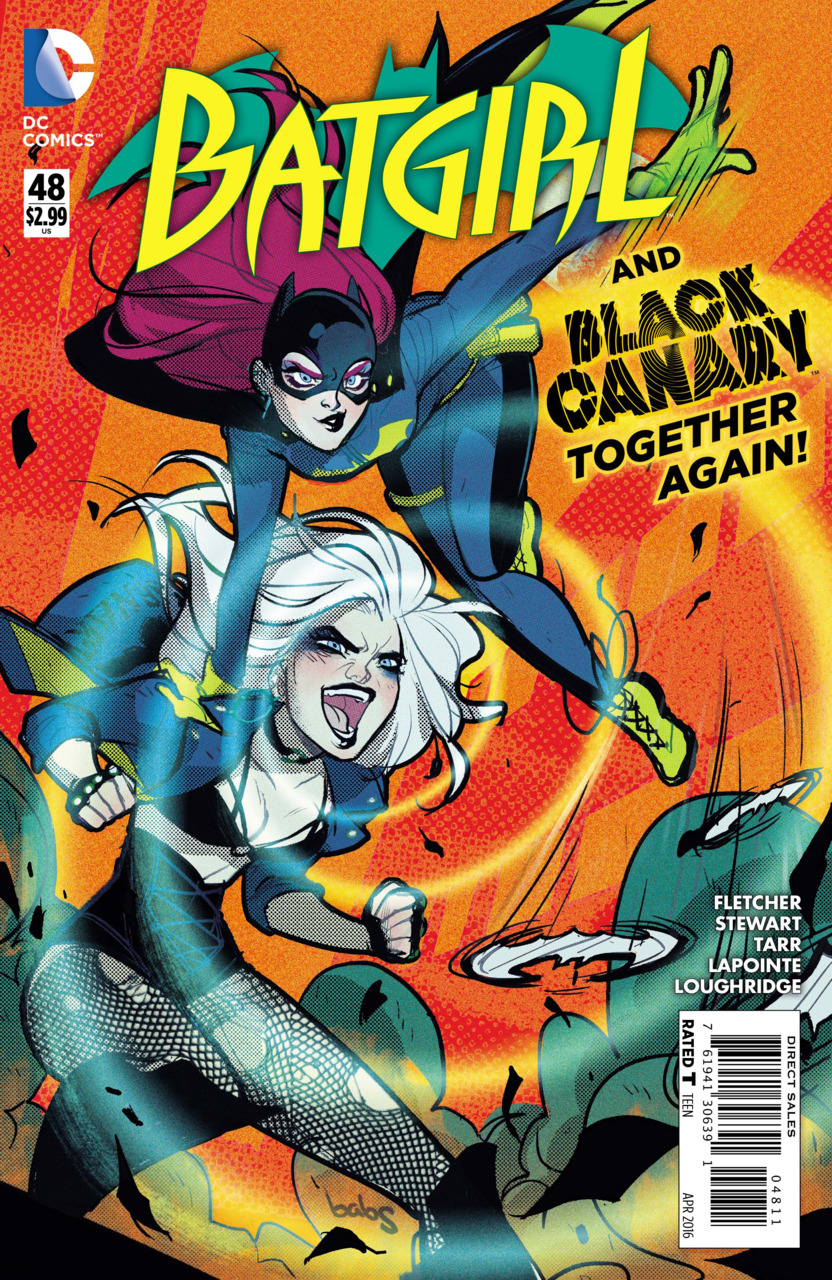 Batgirl’s memory is slowly being wiped, and only Black Canary can save her!

MY THOUGHTS: First up, the selling point to this book truly is the artwork of Babs Tarr. The title can have the same inker and colorist, but Tarr’s energetic style brings the series’ unique sense of fun and excitement to the forefront. Otherwise it’s a fairly common title I find. The stories by Fletcher and Stewart are perfectly decent stories, but their writing style is defined in its unassuming straightforward quality. Babs Tarr’s art makes it come alive, and once she’s removed from the equation the book becomes almost forgettable. People can critique the style of the series as “Hipster Batgirl”, but the difference in artists helps make that aesthetic either inviting or totally boring. If this series is going to last longer than Cassandra Cain’s while maintain the same direction with the two writers, it’s got to have Tarr level artwork, or the book doesn’t do much to affect the reader. For me personally.

That’s not to suggest that the writing is bad, but for this title specifically it’s almost restrained in how much of the plot structures itself around conventions relating to Millennial-era technology. With the further expansion of the new character Greg, we’re given yet another character who’s savvy with computers. Granted that’s his job but it’s still an addition to the near half-dozen that regularly occupy the book already. As well as most of the villains. I probably shouldn’t let that bring the book down as much as I am, since this is no different than the 90s, where Tim Drake’s interest in computers made him an expert in ways which Batman apparently wasn’t, which didn’t make much sense. But it’s a recurring problem. Anyone who’s familiar with certain apps can seemingly hack into anything or figure out any crime because the technology appears to be there. That type of widespread knowledge simply doesn’t exist yet, and as a result the book practically posits that hipsters are all carte-blanche computer geniuses by design. It makes this relatable Batgirl character into someone who grows further and further away from her reading audience, especially if she’s always surrounded by like-minded characters of the same age who are just as nifty with hacking technology as she is. There simply has to be a better way to write this comic without feeling like you’re being told how people are in 2016 and knowing every time that it’s a lie. Because hipsters come in all types of designs, same as any sub-community of people.

With that all out of the way, this is actually my favorite issue of the storyline so far. Barbara’s put at the center of harm, and by the end of the issue we see her in a state of vulnerability the likes of which we’ve not in the whole of the Burnside era. My statement about Greg potentially being revealed as the villain in the last review remains the same, which is to say since we haven’t seen or heard of this bloke before, his “betrayal” means nothing to us. It doesn’t matter if Babs knew him in grade school, who is he to us aside from the obvious villain? He very well may prove to be innocent, but as of this issue it’s still a weak reveal.

I always like seeing Black Canary and Barbara team up, and this issue was no exception. I don’t like the Burnside team’s characterization of Barbara, that being of a short-tempered grump. I know her personal history is pretty messed up, but it feels more like a need to have a recognizable personality to bounce off of rather than establishing a personality for Dinah herself. But seeing her team with Batgirl was cool, especially at the end when Batgirl was seemingly hit with fear toxin and crumpled up like a baby.

I still like this book, especially after the third act of this issue. The reliance on the tech-based plots is firmly irritating me however. I just wonder if the writers truly know nothing else. But it’s a solid superhero cliffhanger at the end, and I’m down to see where it all goes.