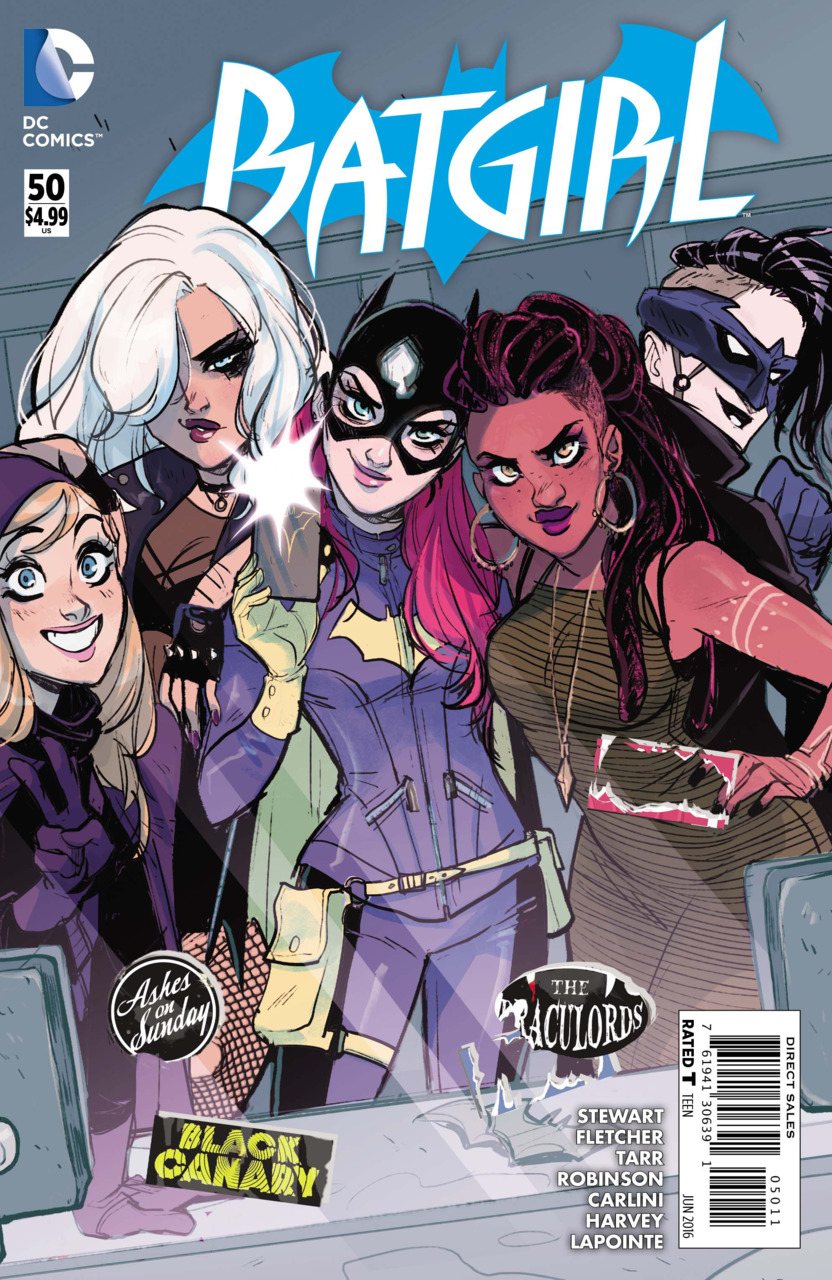 THE PLOT: The Fugue has gathered together a league of Batgirl’s most recent and dangerous enemies in an attempt to destroy her and her fighting partners once and for all!

MY THOUGHTS: This was a very straightforward, action-packed finale. It reads as a gigantic fight scene, like the climax of a movie told piece by piece over the course of the last six months. As the end of the Fugue storyline, it’s solid. As the end of the Burnside Batgirl era…it’s good. It’s not stupendous but it’s perfectly enjoyable.

I’m disappointed actually that this era of Batgirl has ceased to be. The crew of Stewart, Fletcher, Tarr and friends easily could have had another year or two at least to go on. It’s the fickle nature of DC Comics these days. Promising new runs get snuffed out by the next new thing. I know there’s been some controversy concerning Batgirl’s effect of the DCYOU launch of titles, with other books accused of copying the Burnside aesthetic so I get this upcoming Rebirth relaunch. Still it seems as though the Burnside stuff was shoved to the side just to wipe all memory of the DCYOU year of DC out from people’s minds as soon as possible, which is unfortunate considering the run began before DCYOU was a thing.

This issue reads like a final issue of a run, albeit very quickly delivered. Tarr’s artwork is great as always, and the fill-in artists all gel together much more seamlessly than in the previous issue. The changes were less jarring, and I always enjoy seeing Roger Robinson. It was cool seeing Velvet Tiger, Dagger Type and the Jawbreakers again, and I liked the idea of a group of villains going against Batgirl like the Superman Revenge Squad or the Flash’s rogues. Killer Moth’s inclusion threw me for a loop however, as I don’t remember seeing him before in the run. Was he in that Dick Grayson flashback? His design worked with the Burnside characters but was odd considering he started out as a Batman and Robin villain.

Honestly my disappointment really does come from the fact that it’s now all over. No more Burnside Batgirl. I’ve honestly enjoyed the last year and a half worth of stories, and I’m sad to see it go. It’s not all been perfect. I think the second year wasn’t as engaging as the first. This Fugue storyline didn’t get interesting for me until the last couple of issues. I also think in the second year Babs’ personal life was less dealt with. She began dating Luke Fox, but it never felt like she was. He honestly felt like her side piece. Some more drama with Quadir, scenes between Babs and Nadimah, better development with Jeremy and even a stronger development of her relationship with Frankie could’ve really made this stand out. I feel as though all of that was coming, but the rug got pulled out from under everyone. I have to imagine they knew this would be ending around the time the DCYOU launch blew up in DC’s face, less than a year ago.

Seeing some of the splash pages of artwork at the end by Cameron Stewart and Joe Quionnes made me want to see them do full issues of the title. They captured the Burnside aesthetic well. The real hero of this title however is Babs Tarr. I’m thinking she’s my favorite Batgirl artist (Barbara Gordon Batgirl, as Damion Scott is the best artist for Cassandra. Steph had good artists on her book including Dustin Nguyen but none stand out as definitive at this time), and I really loved seeing her draw so many different characters. Aspects of her art that kind of bugged me in the beginning I’ve come to enjoy, like Barbara’s pouty mouth. She’s the most expressive artist DC’s had in years, at least when it comes to a Bat-title, and she’ll be sorely missed on this character. Any other time an artist draws her design on Batgirl, it never feels the same. It’ll be feeling that way for a while now…

I’ve no reason to assume Hope Larson and Raphael Albuquerque’s run won’t be good, but this run felt so cut short by the powers that be that I’m going to need some time to get over it. They came onto a character who I was close to despising after years of the Gail Simone run under the new 52 banner and completely turned her around. It was fun, colorful and was genuinely well written. Even missteps in the process like the problematic nature of Dagger Type were rectified by the crew because they were honest in their intentions to admit their mistakes. It wasn’t just a great run, it was a great team behind it. Nothing good lasts forever, but nothing also stays gone forever. Here’s hoping they’ll return to Barbara Gordon and the people of Burnside, sooner rather than later. Until then, best of luck on their new book Motor Crush (which I’ll be picking up based on their names alone) and all other future endeavors!