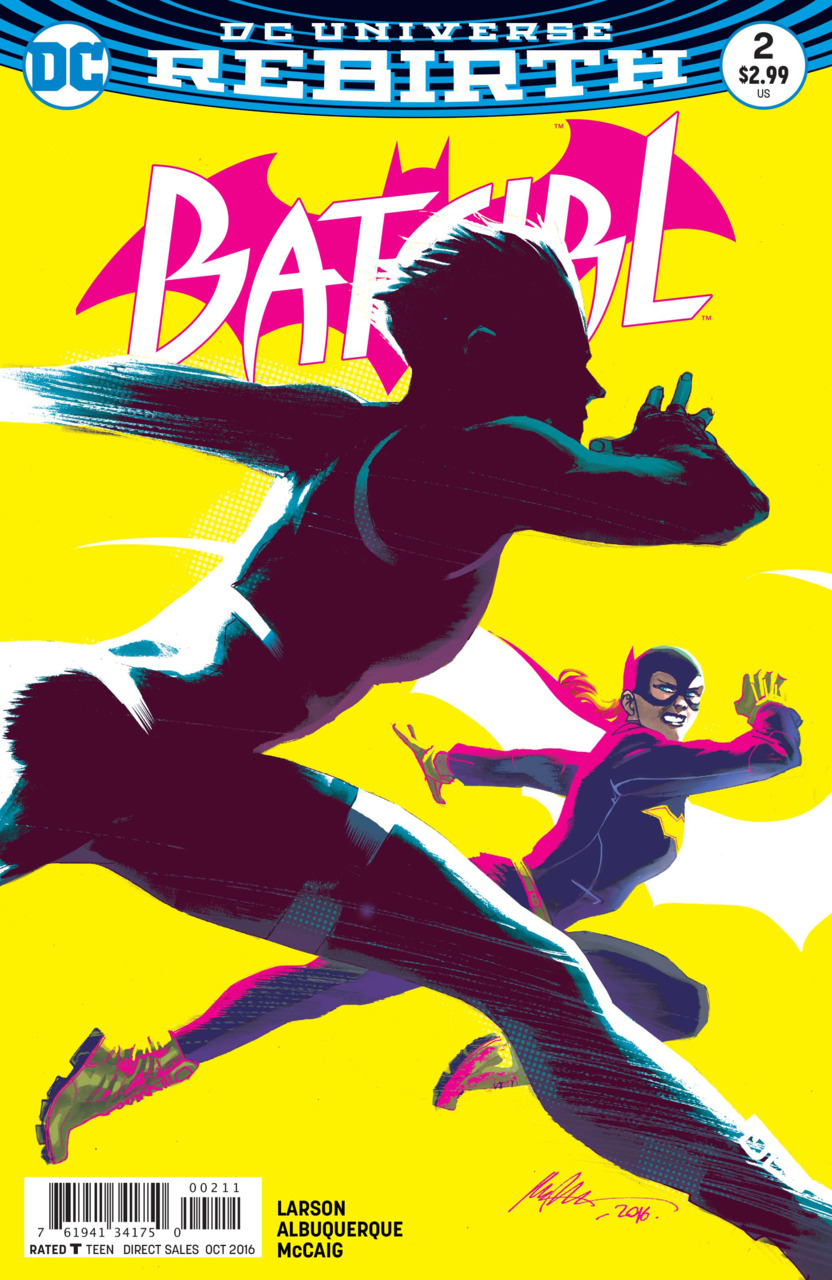 Summary (Spoilers): In Singapore, Batgirl tags a drone spying on her civilian identity and Kai with her own Bat-gadget. Tracking it, she finds it’s only a peeping tom. Stumped in her search for Kai’s attacker (who wants a mysterious formula from him), she reviews the attack in her head, and notices a tattoo meaning “student,” redirecting her to search for the Teacher the Fruit Bat mentioned last issue.

Returning to her B&B, Babs exchanges awkward flirtation with Kai, then goes around in her head about her feelings for the boy. She then tries to sign up at various MMA gyms, hoping to find the Teacher, finding disappointment and sexism until she is directed to Lightspeed Gym, run by May Hao. May tells Babs she used to live in Gotham, leading Babs to adopt the alias “Amy Beddoes.” Intrigued by the story of female fighter Wen Lu, Babs wants to fight her, but May insists Babs stay for a week to train. Initially, May takes Babs down, but our hero refuses to stay down.

Exhausted, Babs returns to her room, but Kai drags her to the stunningly expensive Marina Bay Sands hotel to swim in the pool. Though Babs is uncomfortable with Kai’s below-the-table finagling to get them into the hotel, she finds his attempts to grow up attractive, and the two share a kiss.

Babs tries to nip the relationship in the bud, but Kai sticks with it, altering his plans for the week she is training with May (though he has no idea of Babs’s real activities).

Throughout the week, Babs alternates spending time with Kai and improving her martial arts, thinking deeply about Kai and her feelings the whole time. She leaves for her match with Wen Lu with the relationship unresolved.

Wen Lu proves silent and intimidating, but Babs quickly takes her measure. However, just as Babs sees her opening, Wen Lu’s tattoo – the same as that on Kai’s attacker – distracts her, leading to a vicious KO and Babs on the floor.

In Depth: Larson’s second issue builds nicely on the characterization of the first, though the setting changes to Singapore. The settings of this arc seem likely to change every issue, with Shanghai hinted at next month. Barbara’s internal monologue provides a really nice connective element, giving the comic a strong voice. Larson writes a fiercely intelligent, intensely analytical, Babs who is nonetheless a bit uncertain about her emotions. Additionally, she gives a great callback to Babs’s history as Oracle by throwing in the old Suicide Squad alias of Amy Beddoes.  A nice thread in this installment is Babs’s potential plans to seek some therapy to explore her relational issues when she returns to Burnside, indicating a Batgirl who is as careful about her mental health as she is her physical.

Rafael Albuquerque portrays that physical health brilliantly – Batgirl and Barbara have a strong, healthy looking physique, making the training sequences quite believable (and sometimes painful!).  Hopefully Albuquerque will get at least a full year with Barbara Gordon, setting her image as a powerful, brilliant, fun character alongside Claire Roe in the Birds of Prey.

The relationship with Kai provides some interesting food for thought. Babs struggles throughout the story with whether she wants to date Kai, almost always leaning towards no, but the chemistry they find in the pool haunts her. Larson does a good job blending portraying why Babs finds Kai attractive with the clear signs that Kai’s past activities will certainly end their relationship if Babs decides to pursue it.

One weakness of the story is the sense that other than a few bruises, there’s not much really at stake. Kai’s mystery and the quest to find the Teacher both have no real drive for Babs other than curiosity – no immediate danger to herself or her friend provides impetus. The lovely colors and strong artwork give the readers a great time, and Larson’s strong character work makes it fun, but hopefully the story will prove a bit more than just a villain-of-the-arc soon.

Pick up/Pass? A very fun issue, but seems like it would read much better in the trade. Recommended to wait for collection.

In Conclusion: Larson and Albuquerque bring us for an enjoyable ride in Singapore with Babs, moving between flirtation and fighting with ease.