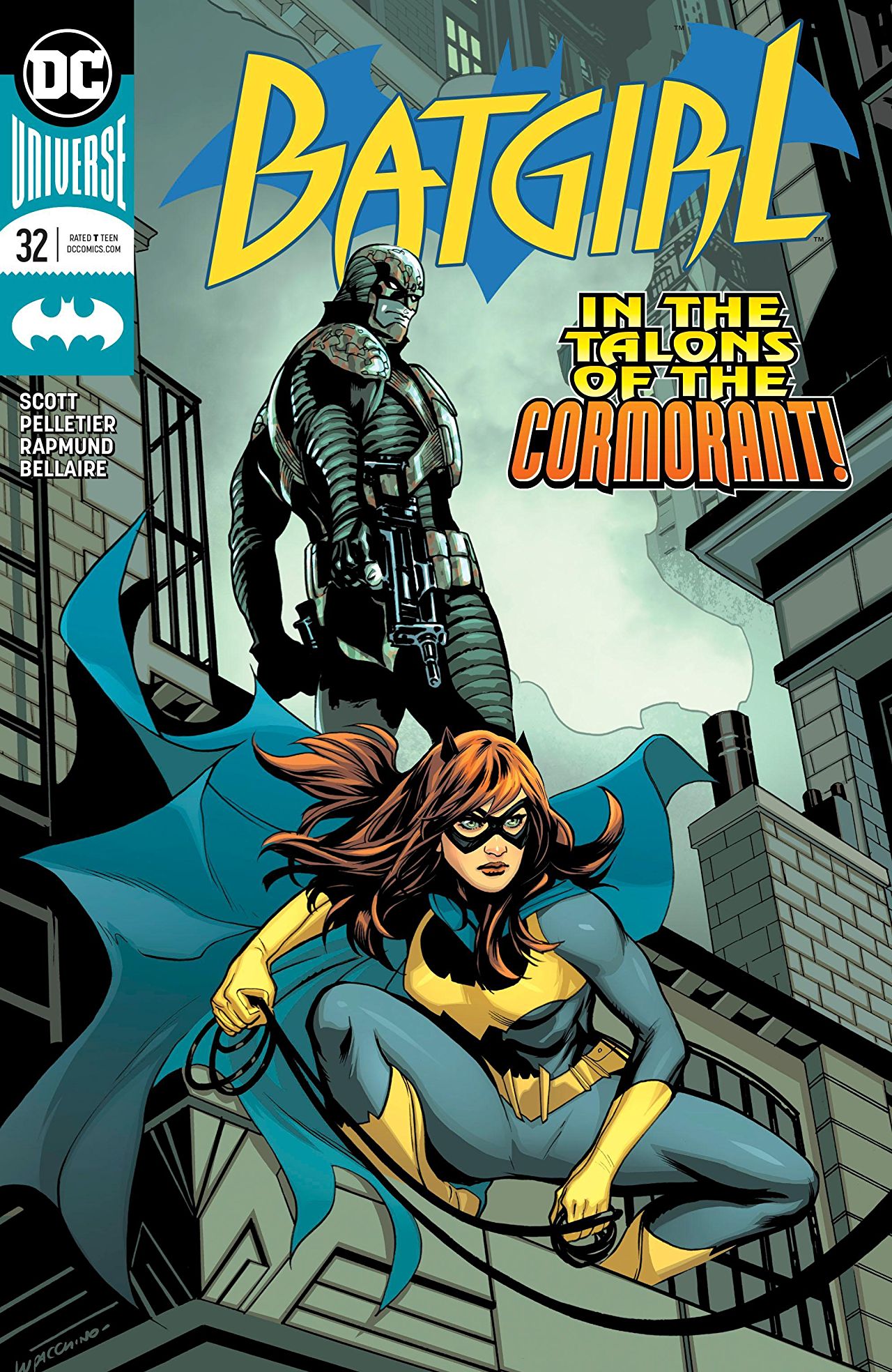 Overview: Cormorant tries to kill a mayoral candidate who has Jason Bard as her security chief. Can Batgirl beat the assassin?

Synopsis (spoilers ahead): Candidate Allejo is about to go on live TV in her quest to be mayor. Her team is concerned that an attempt will be made on her life. Jason Bard, who is head of security for the Allejo campaign prepares for the event. Batgirl is also on the job. She tells Jason that she is going to be sneaking around the vents and hidden areas of the studio and Jason alerts his team. Unfortunately, Cormorant is listening to the conversations and knows what the team is preparing.

Cormorant is disguised as a janitor with a cart full of weapons. He is able to sneak up on Batgirl and shoot her from close range. She goes down. The shot is heard in the studio and Jason Bard jumps on and covers Allejo. Cormorant kills the security guards that are first on the scene. Jason Bard shoots the assassin but he is wearing body armor. Jason gets punched and knocked down. Allejo gets a few punches in on the intruder and Jason gets shot in the leg.

Cormorant wants to kill Allejo in front of the cameras and goes to pull the trigger on his gun when he is stopped by a flying Batarang. Yay, Batgirl isn’t dead, she has body armor too. The two fight. Cormorant grabs Allejo and puts a knife to her throat. Batgirl tries to negotiate with him. Jason Bard shoots and kills Cormorant.

Batgirl is upset at the needless death. She says that he was negotiating. Bard says you can’t trust him, he was going to kill Allejo no matter what. Batgirl says that whoever hired him is just going to hire another assassin and they don’t have any intel on who that is. She also punches Jason and says that she can’t trust him. Jason is upset that he saved the day and Batgirl hates him so much that she can’t give him credit.

After a while Bab’s boss on the campaign finds her coming out of the ladies room and asks her where she was. Babs suggests that she sheltered in place like she was told. The two make up. Allejo does credit Bard with keeping her alive which doesn’t sit well with Babs. And Babs knows that the real enemy is still out there.

Analysis: Writer Mairghread Scott gives us a classic Bat-Family conflict: to kill or not to kill. In this case, Batgirl toes the family line in trying to negotiate with the assassin. However, Jason Bard takes matters into his own hands and dispatches the villain. Barbara is right when she says that whoever hired him is just going to hire someone else. But by that logic, would Cormorant ever have given up his target? It is hard to say, but that is a core element of what makes the Bats so intriguing. Jason Bard makes the kill and is hailed as a hero. Babs has to take a loss on this one.

The villain Cormorant is a fairly stock assassin character. There isn’t anything unique to him which is a detriment to the story. The story isn’t about him though, it is more about Babs vs. Bard and that part of the plot works very well. Also, it appears as if we are going to be getting more of the Allejo storyline as the mayoral candidate tries to close Blackgate Penitentiary.

The pencils by Paul Pelletier, inks by Norm Rapmund, colors by Jordie Bellaire, and letters by Andworld Design. There are some terrific portraits of the characters in the issue. Jason Bard has several flattering panels. There is one where he mentions to Batgirl that he was Commissioner and she says that he didn’t earn it. The look of shock and regret on his face is effective. There is also a series of three panels after Cormorant is killed, that shows Jason, Allejo, and Batgirl all reacting to the event. Jason is shown as someone that has just committed a grim task. Allejo is also upset at events and looks towards Jason’s panel compassionately. Batgirl is just ticked off. It is an effective way to show the character’s feelings through the art.

Cormorant wears camouflage that has red in it. After he shot Batgirl I thought it was her blood. Got me.

Final Thoughts: A solid second arc of this creative team’s Batgirl series. It is a decent political thriller with an uncompelling villain but looks to be just the start of a larger story.