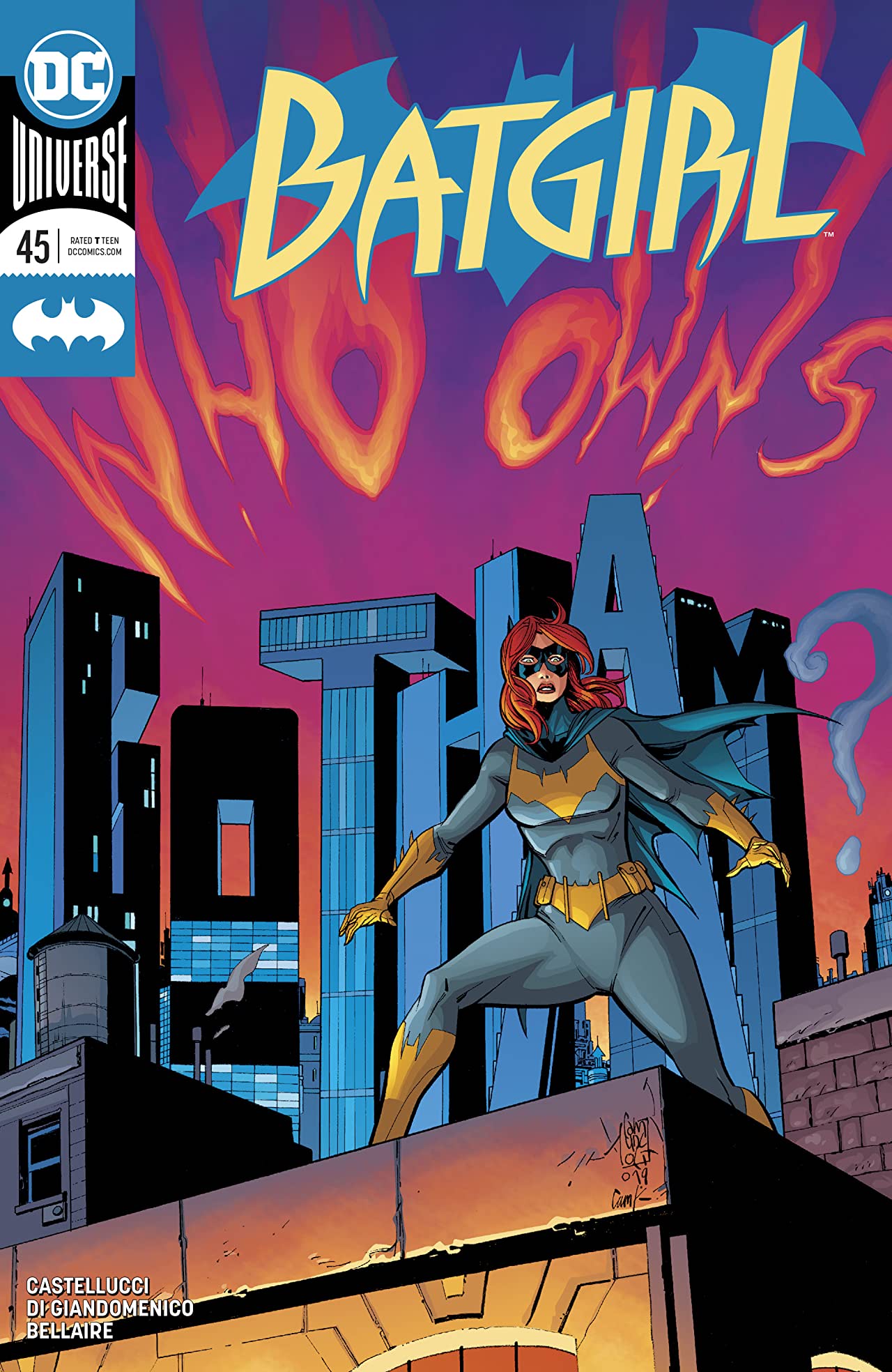 Synopsis (Spoilers ahead): Batgirl sees Jason Bard running inexplicably, given his injured leg, from a homeless woman being encased in metal. She swoops in as Bard escapes, trying to save the woman from both the metal and a hulking dark figure, but the figure wraps her legs with a cable gadget and makes off with the metal-covered woman in a van. Determined not to lose them, Batgirl frees herself and leaps aboard the van, managing to force them to drop the dying woman. As rescuers arrive, the woman dies, and Batgirl sadly collects the metal, revealed to be something like a (but not quite) liquid nanobot metal compound. In her Clocktower lab, Babs discovers it’s a parasitic metal simulating life. Batgirl then gets a text from Jason Bard to meet.

The scene flashes to Jason’s perspective when he went to meet the homeless woman. That woman had been replaced by a man who told Jason his friend was dead. This man started attacking with the liquid metal and electrical shocks. Jason wakes up after being knocked out by a dark figure and receives a text from Batgirl to meet. He tells Batgirl his side of the story, and she reassures him that he’s trying to change and encourages him to call Barbara.

Batgirl examines the body of Jason’s friend in the morgue and the file online after a little hacking, but before she can find too much, her job with the congresswoman calls her in to help get Gotham on its own green energy system. Digging into the pseudo metal, Batgirl finds a connection to the congresswoman’s energy company owner, Dasha Berlova. She attends a demonstration and tours Berlova’s factory, noticing that her sample of pseudo metal wants to rejoin the metals being used. Jason and Barbara both realize that Berlova is turning people into statues with her metal, despite her claims of wanting to use it to help amputees and build clean energy buildings.

Berlova’s team orders them out, and Batgirl investigates her power substation later that night. She finds many more statues, clearly, people covered in the pseudo metal, but Batwoman attacks her, irked that Batgirl has muscled in on her investigation. Berlova arrives, and the two Bat-women watch as Berlova gloats about bringing her dead mother back to life using the deaths of the people in her statues. Batgirl tries to stop her, but the dark figure appears, revealed as KGBeast, Batwoman’s target. The Beast knocks Batwoman out, then grapples Batgirl. Berlova orders that KGBeast use her as another living sacrifice for her experiments.

Analysis: After the dreadfully frustrating “Evil Robot Oracle” plotline and the incredibly dull “alternate fantasy world” arc, Cecil Castellucci has developed an incredibly complex and reasonably well-paced plot – perhaps only flawed in trying to cram too much exposition into this issue and not leaving enough space for the characters to interact and develop. The moments where Babs and Jason Bard progress their relationship are character highlights, despite being only one or two panels. The villain gives very generic and convenient monologues near the end explaining her motives, which is a bit disappointing after all of the detective work that Babs and Bard do in the issue. The appearance of Batwoman is welcome, though the cliched “heroes meet on a stakeout and fight” scene could have been skipped or replaced with stronger character writing instead.

The highlight of the issue, though, was the art. Carmine Di Giandomenico returns, with master colorist Jordie Bellaire, and together they make the book once again one of the stronger visual offerings of the week. Di Giandomenico’s sketchy but assured linework, and Bellaire’s well-judged panes of color and shade give all of the our main characters enormous appeal and highlight the best look for Babs’ new suit, even more than designer Sean Murphy.

This title has clearly undergone a lot of retooling, given the rapidly changing solicitations, and hopefully, Castellucci will continue with the stronger elements of her plot (the complexity, the detective work) and ditch the more cliched elements in favor of better character interaction and more time devoted to resolving (either positively or negatively) the romance between Jason and Babs. This arc will likely have to wrap up quickly so that Batgirl can join the Joker War in the coming months, which probably explains why the villain revealed so much so lazily.

Giuseppe Camuncoli draws a polished, though not particularly energetic Batgirl with a gorgeous cloudscape behind her saying “Who Owns Gotham?” Terry and Rachel Dodson provide a variant that shows Batgirl shining a flashlight at the reader as she searches through the snow, a much stronger cover than some of their recent contributions to this series. The new costume looks quite sleek in the Dodson’s hands, and hopefully, their variants will continue in this trend rather than the fairly disappointing “spotlight” cover they did recently.

Final Thoughts: Though significantly better than the last two arcs in both plotting and especially art, the characterization leaves something to be desired.