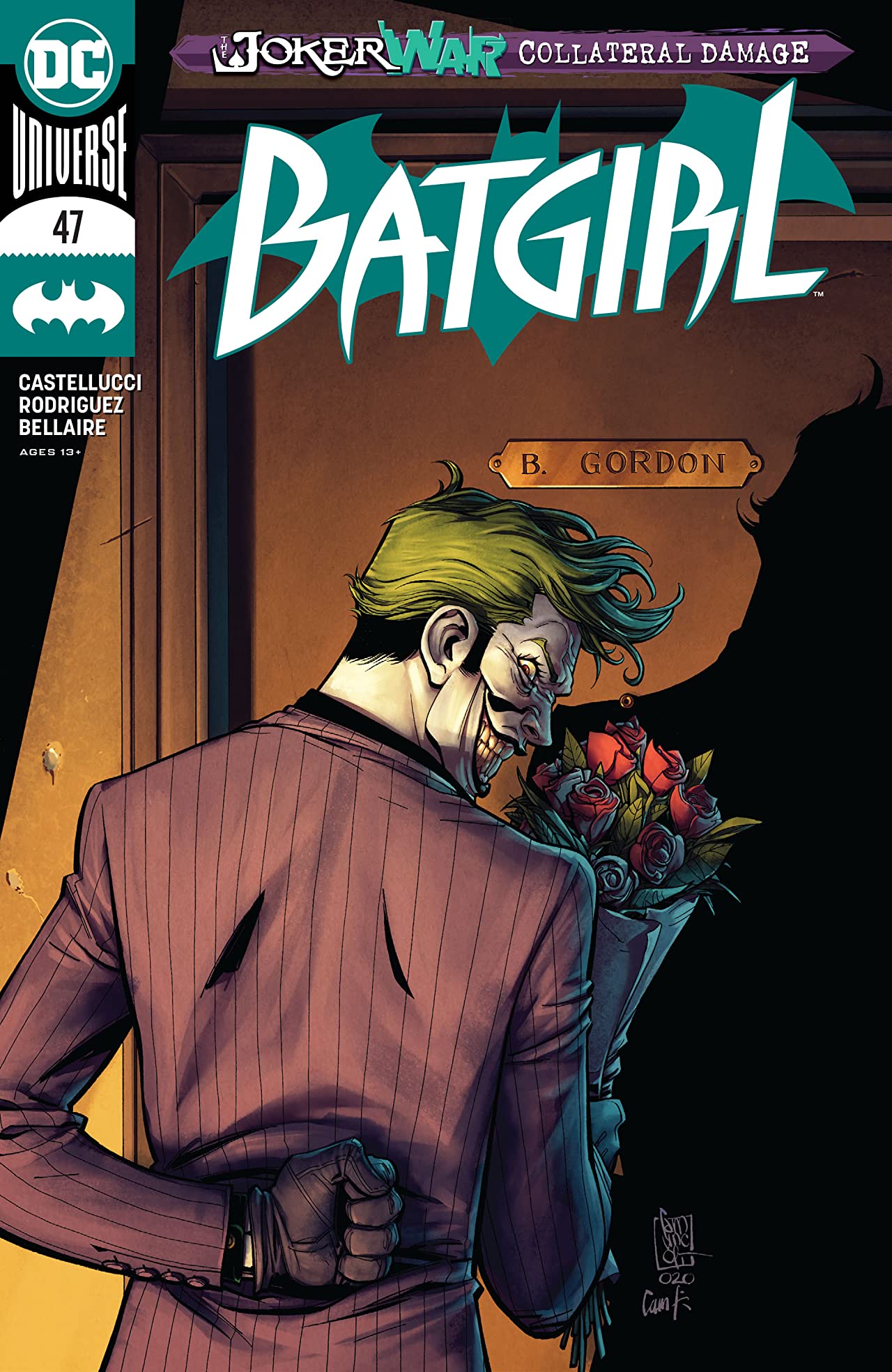 Overview: As Barbara Gordon begins to look to her future, she is confronted by the face of her past.

Synopsis (spoilers ahead): Continuing straight from the previous issue, Barbara Gordon returns home after having spent a productive day with Jason Bard. Contemplating the selflessness of her life, and appreciating a sense of happiness for once in a very long time, it takes her a few minutes to realize that someone’s in her apartment.

Regaining herself, she takes control of her surroundings and, using the element of surprise, manages to get the jump on the Joker. Unfortunately, Joker is also prepared. With the press of a button, he incapacitates Barbara, shorting out the implant in her spine. For the second time now, the Joker has effectively immobilized Barbara Gordon in her own home. Fighting through the fear, Barbara wills herself to action while Joker blathers on unaware.

She manages to get a direct blow in before Joker again exerts his dominance over her with the WayneTech disruptor. He is now in nearly full control of her body, and with the disruptor, he can move her against her will. He then reveals the reason he has paid her this visit: he wants the codes to Batman’s computers. Literally laughing him off, Barbara uses psychology as her weapon and manipulates Joker into directing them into the hallway, where she’s able to subtly trigger an alarm.

Too late, and removing yet another layer of security for herself, she realizes that the last person that alarm had been tied to was Alfred, now dead. As persistent as she is resourceful, Barbara adapts her tactics as Joker walks them up onto the rooftop, where he further attempts to cripple Batgirl by sharing that he also knows what she did with Jason Bard, and compares her actions with Joker’s own.

In an effort to buy time and to distract the Joker from paying too close attention to her struggling to free herself, Barbara plays along and tells him about the codebreaking required to infiltrate the Bat-computers. In triumph, Joker is ready to head to the Batcave with Barbara in tow when she plays her own hand and reveals her wild card: she severs the implant from her own spine, thus severing the Joker’s ability to control her movements. Before the Joker can escape, Batgirl hurls a fencepole at him and cracks the Joker in the spine, and both crumple to the ground. Joker gives his approval and admits that she’s the best Robin, after all. They both share a weak little laugh as the issue ends.

Next: A Gordon Family Affair

Analysis: As we often see when the Joker is in a Batgirl story, there are many references to The Killing Joke. This issue is no exception, but it also respects Barbara Gordon. The initial setup is of a horror movie. Barbara enters her apartment at night and does mundane human-life things. She’s even playing on her phone for a bit as the stalker creeps around behind her, monitoring her before it’s his time to strike. She launches into Survivor-Girl mode and combats not just her attacker, but also that crippling fear that the worst day of her life was going to happen all over again RIGHT NOW, just as she’s truly getting on her feet again.

After years of hard work, tears, and sacrifice it took to regain control of herself, the Joker takes it all away with the push of a button. Not only has she lost control of her ability to walk again, but the man who had taken it away the first time has also taken control of her literal movements. Castellucci does a wonderful job of putting the reader in this horrible situation. I, myself, felt the panic and the inability to essentially breathe as this monster towered over Barbara, laughed at her forced submission, and executed his dominance over her. But that time in Barbara’s life wasn’t just forgotten as a nightmare of the past; she had demonstrably prepared herself for this situation and showed that she was never going to be that victim ever again. From hiding Batarangs underneath the entertainment center, to a silent alarm, to having the acumen to use the Joker’s own muddled psychology against him, Barbara Gordon always held the true upper hand.

During the fight in the living room, Barbara literally ‘turned the table’ on the Joker, in a nice foreshadowing of the final scenes in the issue where, on the roof, she returns the favor in kind by paralyzing (at least, temporarily) the Joker himself, now helpless and lying in her own mercy.

Also of note is that the issue begins at night, in Barbara’s apartment. The place she calls home is nearly bare and dirty, with wallpaper peeling from the walls. There are no doors to her medicine cabinet and her trash is overflowing. Obviously Barbara’s been a very busy girl, and this is to be expected, but symbolically and specifically for this story, it speaks of the darkness and the low places she’s been to in her life. She is further brought down literally as well as figuratively when the demon of her past returns and disrupts her all over again. However, she manages to manipulate the man and when the issue ends, Barbara is triumphant, having ascended the stairs from her lonely apartment in the dark of the night as a victim to the victorious woman she is on the roof of her building, as the sun rises over Gotham, reflecting how she has broken out of Joker’s stranglehold and risen over him.

The one minor detail I admit to having trouble with is the final reference to The Killing Joke; Barbara and Joker share a little laugh together. It’s fine, I guess, and I get it. It just took a little bit of the importance of the story out of it for me.

The art was beautiful, with only one or two inconsistencies with the images of the Joker standing out to me. In one panel he appears as a malicious madman, and in another, he seems rather innocent. But overall, I really loved the detail. When Barbara is in her panic state, we are shown the intensity of her panic not just by the expressions of her face and contorted body, but also by the borders of the panels. At one point the page is nearly cluttered with red, ripped-paper-and-photograph imagery that really drew me into the moment.

Final Thoughts: This was an excellent issue. I only wish this concept would be the final issue of the Joker War. It would have been so satisfying for Barbara to be the one to take him out, especially in this manner. The Batgirl series’ tie-in with the Joker War begins here and continues to #50, so I admit I’m a little nervous when considering how this arc will go after this issue, but after the thought put into this so far, I’m on board with trusting Castellucci will land Barbara respectfully.