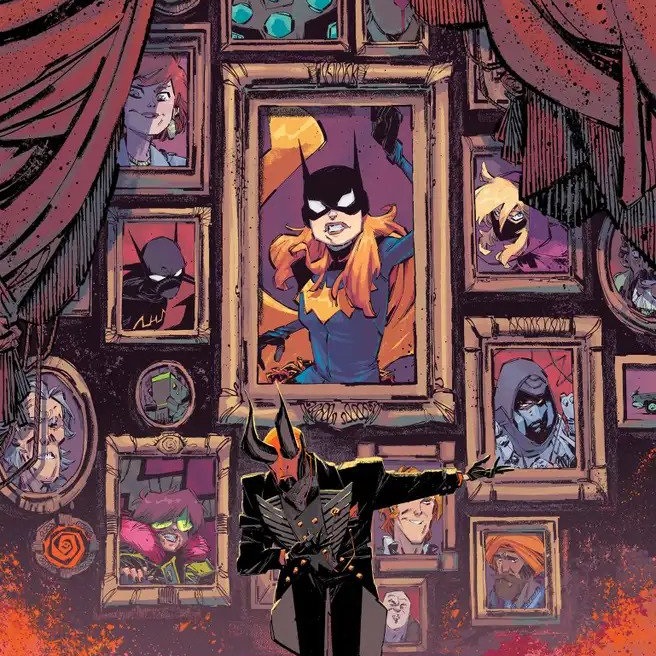 Overview: In Batgirls #6, the Batgirls find themselves in a precarious situation, each at the mercy of Spellbinder and his minions.

Synopsis (spoilers ahead): Bound and restrained to a chair, Barbara Gordon glares at Spellbinder as he stands in front of her, painting a canvas and recounting the tale that led him to his devious plans as Batgirls #6 begins.

The people of Gotham are conditioned not to see culture, kept blind from every idea or inane opinion. Working at Arkham Asylum had opened his eyes to the truth; the patients locked in there weren’t the crazy ones; rather, they were the were of complete sound mind because they were the only ones to see the truth around them.

Conventional art therapy, he had realized, would never work on them, and a deeper, purer way to get into their heads was needed. That was how he discovered his ability to connect to them through portraiture; his brushstrokes worked in tandem with a strain of fear gas, altered to affect memory and trigger vivid flashbacks to allow patients to truly see themselves in his art. The Tutor was just one such puppet controlled by Spellbinder, and now Barbara is going to be next.

Satisfied she’s heard enough, Barbara uses a batarang, hidden within her sleeve, to slice through the ropes tying her arms to the chair. With a flick of her wrist, the batarang slices through the canvas Spellbinder had been painting, whizzing past his head by inches.

Connecting her fist to Spellbinder’s jaw, Barbara tells him to save it all for his parole hearing. Despite still being bound to her chair, she’s in her element and able to subdue Spellbinder, but isn’t fast enough to prevent him from unleashing a cloud of fear toxin.

Across town and at the old Arkham Asylum, Stephanie squares off against Tutor, unaffected by his verbal knives and ploys to get her to believe she needs to be ‘deprogrammed.’ Above her and on rooftops, Cassandra calls for backup; there are too many mind-controlled civilians, one of them being Grace O’Halloran, a news reporter for Gotham City rolling tape and live recording the events, despite being mind-controlled herself.

She’s brought her cameraman atop the roof with her, and just as she begins proclaiming the fall of Gotham City, her foot slips, and she falls backward, off the edge and plummeting straight towards the ground below.

Snatched out of the air by Cassandra, they both go crashing a window into the same room Stephanie is currently being attacked by Tutor in. The timely arrival of Cassandra provides both girls with the backup they need, and they make quick work of restraining up the majority of Tutor’s mind-controlled crowd.

Elsewhere, and despite the noxious cloud of green fear gas surrounding them, Barbara successfully defeats Spellbinder; pain is an old friend for her and she thrives on overcoming fear. After quickly hacking his phone, Barbara broadcasts a message across Gotham City as Oracle, revealing the man behind the mask and his deceit.

Thankfully, her message reaches everyone by the other two Batgirls, and just as the civilians begin to return to their senses, Tutor manages to escape, clambering out of the room and onto the Asylum rooftop.

Both Batgirls rush to pursue and quickly catch sight of a bomb strapped to Tutor timed to go off within the next thirty seconds, which Casandra rips from his chest and tosses to Stephanie. The blonde dashes away and glancing left and right for a solution notices Bondo parked down the street. Decision made, Stephanie floors it, driving straight towards the docks with the bomb ticking to zero seconds in the seat beside her.

Just as the car runs out of the road and hangs suspended in the air above the harbor waters, the bomb explodes, sending a massive explosion echoing throughout the city.

Batgirls #6 comes to a close the next morning; rested and showered, the girls sit together as the morning news starts to play. Although they all have wounds, at least they have each other. Just then, Grace O’Halloran comes on the screen, recapitulating last night’s events. Her summary ends with a bold statement that they owe their lives to the Batgirls, who saved them all from a manipulator and bomb. Before any of the Batgirls can hear the rest of her sentence, the broadcast suddenly starts breaking up and glitching.

Springing into action, Barbara states that it’s Seer trying to hack their transmission again and moves to unplug the t.v.

Just then, the front door opens, and although their place was hard to find, Seer has tracked them down, but she needs their help!

Analysis: Batgirls #6 brings to light all the hidden motivations of Spellbinder and the Tutor, concluding one chapter in the adventures of the Batgirls, just another begins. Charles Dante stood absolutely no chance against Barbara Gordan and she manages to free herself, take him down, and expose him to the whole city all on her own. Across the board, the three main characters, Stephanie, Cassandra, and Barbara, are very well-written and personable, and highlight the strength of their bonds of friendship and sisterhood.

While this series has a wonderfully unique vibe and fun look and feel–the art is always engaging and matches the story perfectly–Charles Dante’s backstory felt like it had taken a bit too much inspiration from Harley Quinns in certain ways. On the one hand, it’s a familiar tried and true plot point, but on the other, it is extremely predictable. There have been multiple characters whose sordid and villainous backstory has developed by working in Arkham Asylum as a therapist or caretaker of some kind, and it would have been genuinely interesting to have read a character with a different spin on it.

Throughout the entire series, Seer has been the villain, one step ahead and behind the Batgirls, slowly hunting them down. What she might need help with, or help to hide from, is a question to be revealed and hopefully answered in the next issue, along with who Seer really is and if her plea for help isn’t just a trick to bring her one step closer to a hidden goal.

Spellbinder is finally safely behind bars, but his actions did provide a positive; finally, there is someone in Gotham City advocating for the Batgirls, and Grace O’Halloran isn’t afraid to stand by her statement. Hopefully, her witness won’t be the only one and will provide a path for the Batigrls to get back in good standing in the eye of the public.