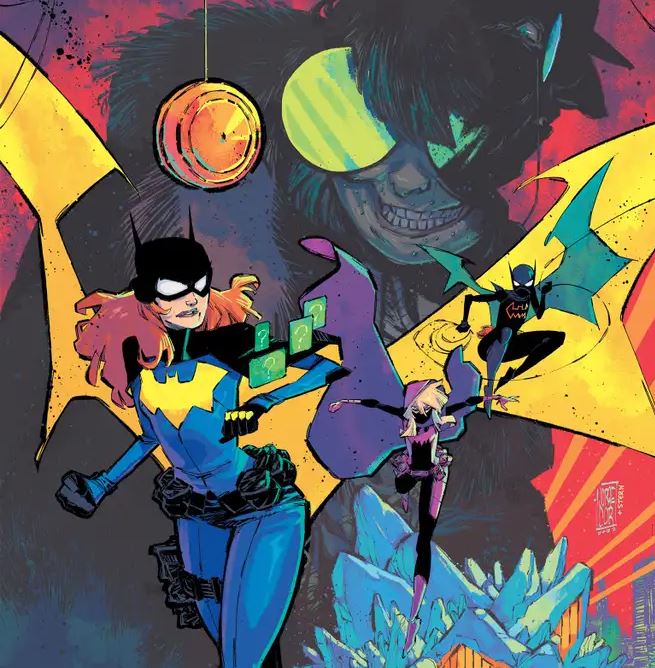 Overview: In Batgirls #8, the Saints make their final move against Seer, and it’s up to the Batgirls to save the day…or die trying.

Synopsis (spoilers ahead): Batgirls #8 begins in the Iceberg Lounge, as Dick Grayson and Barbara Gordon, dressed to the nines, are seated among many other patrons as Lulu Laroux, sword swallower extraordinaire, makes her appearance.

They’ve slipped in to track down and rescue Seer, who is currently being held hostage by the Saints, and just as Laroux begins her act, the two of them slip away, beginning their hunt. Meanwhile, on the roof, Stephanie Brown and Cassandra Cain, on the prowl as Batgirls, successfully incapacitated the sniper, Assisi, and finished mapping out their teammates’ route to the secret basement where Seer is being held captive.

Below them, Dick and Barbara change into their uniforms within an old freight elevator that deposits them on the bottom floor of the Lounge. They’re greeted by Valentine, who specializes in close combat, and Dick quickly jumps in to handle the situation while Barbara splits off to find Seer.

Barbara tries to radio for the other Batgirls, but unfortunately, the concrete interferes with the comm signal, and only bits and pieces are able to get through. Clearly, the Saints knew they were coming; Barbara warns the Batgirls to stay out of the Lounge and to not come after her and Nightwing.

Seven stories above her, the other Batgirls have their own fair share of trouble to deal with when their captive, Assisi, makes a break for it and hurls himself off the rooftop and down through a skylight below them. All three of them go crashing through the skylight, glass raining down as they crash to the floor and inside the Iceberg Lounge among startled guests and a rather pissed-off-looking Penguin. Fun fact: the Cobblepot family was the only group to oppose Gotham Metro Insurance from prohibiting skylights within city limits claiming that glass ceilings were not a liability. Oh, the irony.

Beside him, Lulu Laroux looks somewhat murderous as well– after all, her premier night was just rudely interrupted, and it doesn’t take much coaxing from the Penguin for her to regurgitate all the swords she’d just previously swallowed and use them to attack the Batgirls.

Laroux is no match for both Stephanie and Cassandra, however, and a well-aimed punch to the jaw is enough to take her down, at least for the time being.

Meanwhile, farther down below them, Nightwing takes out Valentine with ease after a few insulting comments about Barbara are made, and then moves off to go provide backup.

Farther down the dark maze of hallways and corridors, Barbara discovers Seer, who has no choice but to obey Tarsus, as he has a gun to her head. Tarsus is forcing Seer to convince the rest of the world that Simon Saint is alive, as she once did him and the others, and doesn’t see the inconsistency despite Barbara pointing out his hypocrisy.

In the freight elevator, Stephanie and Cassandra easily take out Lulu Laroux, who followed them down below, and are able to join the fight with Dick and Barbara right on time to help defeat Tarsus.

As the others ensure Tarsus isn’t going anywhere, Barbara makes sure Kira, otherwise known as Seer, is safe, and then covers their tracks by destroying all of Seer’s equipment.

The team of Batgirls plus Seer and Nightwing (and Tarsus as their captive) move out, leaving the Iceberg Lounge via the sewers, and it is there that Seer makes her get away by stabbing Tarsus and disappearing.

In the end, however, all’s well that ends well; Tarsus and Valentine will be shipped off to Blackgate Penitentiary, facing serious charges, and although Assisi remains at large, the girls’ opinion two out of three ain’t bad.

Later, once showered and changed out of their sewer-caked clothes, Barbara bids Stephanie and Cassandra goodnight, but before falling asleep gets a text from Dick. They never actually got to enjoy their date, and so he took it upon himself to finish their evening by waiting up for her outside of her window on the fire escape.

It turns out they get their evening after all.

Analysis: So long to the Saints and their machinations, as the Batgirls, with the help of Nightwing, have officially put them out of commission. Becky Cloonan and Michael W. Conrad wrote Batgirls #8 in much the same style as the issues before it; comedic and entertaining, choosing to focus more on providing the characters with a good time and good vibes versus the darker, mature tone that other DC Comics stories are composed of.

Art by Robbi Rodriguez fits the story well and still manages to capture the youthful energy of the story while being a bit more realistic than the art in previous issues. While the cartoon-esque feel of art by Jorge Corona was fun, I do have to say I’ve really enjoyed the change.

Overall, there are a few negative points to say about Batgirls #8 as its look and feel fit right in with the series so far; I particularly enjoyed the commentary about skylights and insurance and the constant banter between Dick and Barbara. Their relationship was light and refreshing and was fun to read. One drawback of this story is that it feels a little bit unbelievable for Seer to have just slipped away as easily as she did, considering she was surrounded by three Batgirls and Nightwing, however, I think most readers might agree that one weak point of the plot was the fluctuation of Seer’s skills and abilities. She’s clever and creative enough to trump and outsmart Barbara but was easily taken captive by the Saints and needed rescuing. In the end, however, she’s able to take out Tarsus easily enough and slip away, without Barbara anticipating that.

While it’s not an extreme gripe, it is noticeable. On the whole, the story and the characters are all well-balanced and endearing.

In the end, the Batgirls successfully kicked butt and, with some help from Nightwing, incapacitated the Saints, saved Seer, and ensured everyone got home safe and alive. It’s a win in anyone’s book, and despite the craziness of the evening and near-death experiences, Barbara and Dick were able to finish their date after all.