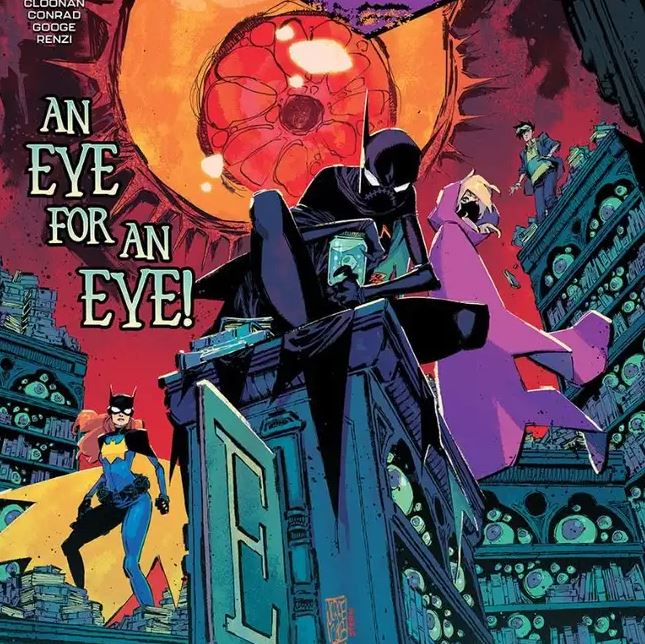 Overview: The Batgirls delve deep into the world of puzzles and codes as they work to crack the cipher in Batgirls #10, while in the shadows, someone else begins a deadly game.

Synopsis (spoilers ahead): Batgirls #10 begins in the Hill, Gotham City, as a man sits within his office accompanied by Killer Moth, and the sounds of the Times of Grace podcast spill through the air, announcing the death of Walter Arnold Greene, a resident of the Hill for seventy-five years. The room’s only occupants regard each other and agree to make the game the Batgirls are playing just a little bit more interesting.

Elsewhere, Stephanie and Cassandra have parked themselves in Gotham Hill Public Library, both as a way to find relief from the city’s recent heat wave and find books that might help them break the cipher.

It’s just as Stephanie is carrying a mountain of books over to their table that she knocks into Kyle Mizoguchi, who’s there waiting for his sister Maps. They strike up an easy conversation, and all three young adults end up at the table pouring over books that might help them break the code.

Back at their home base, Barbara Gordon discovers that the goo found around Greene’s eye was a synthetic silk compound. Deciding that she’s going to share her new findings with the GCPD the right way (and not hack into their servers), Barbara gives Commissioner Montoya a call.

As evening settles, the two Batgirls and their new friend make their way home; however, they are no closer to their end goal than when they started. Passing Steph his number, Kyle tells her to give him a call sometime if she ever needs another pair of eyes. Grinning and blushing, Steph waves goodbye.

As the girls make their way home, Cass notices something in the sky; the streak of the thing from the alley sometime back when they were dealing with the Saints. Quickly setting their bags down while grabbing their uniforms, the girls shortly make their way across the rooftops as Batgirls, hot on their quarry’s trial. Their path through the city’s skyline is cut down, however, by their suspect firing a ball of white silky goo at them.

The girls are quick to react, but their battle doesn’t last for much longer, and Killer Moth manages to make his escape while Cass and Steph pick themselves away from the sticky silk, covered in goo and dirt.

They return to the Loft empty-handed but covered in cocoon webbing, and a quick buzz from Oracle in their ear tells them she’s out for a meeting and will be back later.

At least they’ve made some progress today in identifying their mystery flier as Killer Moth, and from here on out, their priority is cracking the code. After a long, healing shower, that is.

A dozen blocks away, Barbara, as Batgirl, greets Commissioner Montoya, asking for her cooperation.

Montoya isn’t onboard; everyone knows this Batgirl can get into the GCPD servers without breaking a sweat, and as much as she keeps trying to turn a blind eye, the fact is that the Batgirls are as much a part of the problem as they are the solution. Montoya can’t agree to an alliance with her or any of the Batgirls. They’ll do things their way, but Montoya won’t be a part of it. The declaration is final.

Batgirls #10 continues at the home of Dick Grayson; a knocking at the window reveals Barbara, who’s somewhat grouchy and disheartened. Knowing what will cheer her right up, a few minutes later, the two sit with steaming mugs of coffee as Barbara recounts her interaction with Montoya.

Dick knows that they’ll solve the case, and the conversation and coffee are soon left forgotten as the two head to bed.

Midday at the Loft, Steph and Cass await Barbara’s return, books splayed out everywhere between them. A few minutes later, Barbara arrives, catching up with the girls and telling them that Renee Montoya and GCPD won’t be working with them.

It’s only a few moments that yet another person arrives at their home, and the girls open the door to find Alysia standing there with doughnuts and boba.

The two girls catch up, chatting away, and through the course of their conversation, Barbara realizes that Grace O’Halloran frequents the bar Alysia works at. Realizing that if she ever wants to pass on an anonymous message to the podcaster, Barbara has a way. Their conversation is brought to a halt by an exuberant cry from Stephanie, announcing she cracked the cipher.

It reads thus: Your next hint hangs in the enclosure that houses your namesake. Fly to the top, far from prying eyes. Bring a torch.

Pondering, Cass suggests it might the bat enclosure at the Gotham zoo, which is worth a shot to the other two girls.

This whole series of events, however, has got Barbara wondering; who else do they know with a series riddle habit?

Elsewhere, at some unknown location, a bespectacled man gazes at a driver’s license, muttering to himself. As he pins the licenses up next to a host of others, the man states that all these people are scum and waste. Mr. Greene’s day came and went, just like garbage day has come for Gotham, and Mr. Fun is taking out the trash.

Analysis: Batgirls #10 kicks us into a new storyline, one fraught with riddles, clues, and absolutely no working relationship between the Batgirls and the GCPD. It’s very clear that times have changed as the city’s law enforcement is no longer choosing to seek the help and alliance of their superhero community.

I think it’s safe to assume that at this point in comic history and events, superheroes are just a given. Wouldn’t it be better for the organization, the city, and just workplace efficiency, to learn to work with the vigilantes out there, who are able to gather information and solve crimes much faster than the regular civilian? HR would have a field day, which could have provided a comedic moment and some furthering of the superhero world-building that it feels like this issue missed out on.

On the other hand, the character interactions continue to be fun and heartening to read. Stephanie and Cassandra continue to work together to crack the cipher code, which ultimately ends in a successful break, providing them with the information they need to discover the second clue. The introduction of Kyle in this issue provides enough insight that there might be more than just friendly interest between him and Stephanie, which, while in it itself is not a bad development, perhaps a disappointment to the readers out there who had hoped for Stephanie and Tim Drake to one day get back together. (Maybe one day, but it’s looking like today is not that day, sadly).

Oh well, hopefully, the great and positive relationship between Barbara and Dick Grayson might be enough of a consolation prize; Becky Cloonan and Michael W. Conrad bring some wonderful moments between those two characters to the forefront of this series, which, while it’s not the main focus, provides lots of endearment.

Once again, the art by Neil Googe and Rico Renzi in Batgirls #10 blended with the cheerful and humorous script set the Batgirls series up to be that would fulfill anyone’s need for a feel-good story. Too much of that can get dreary at times, as most readers are familiar with, but it can be a great break from other, more mature storylines every once in a while.

The games don’t end, and it's now apparent to the three best friends that Killer Moth is one of their primary suspects in this new string of events, but the identity of the second mysterious person is yet to be revealed. The ride is just getting started!