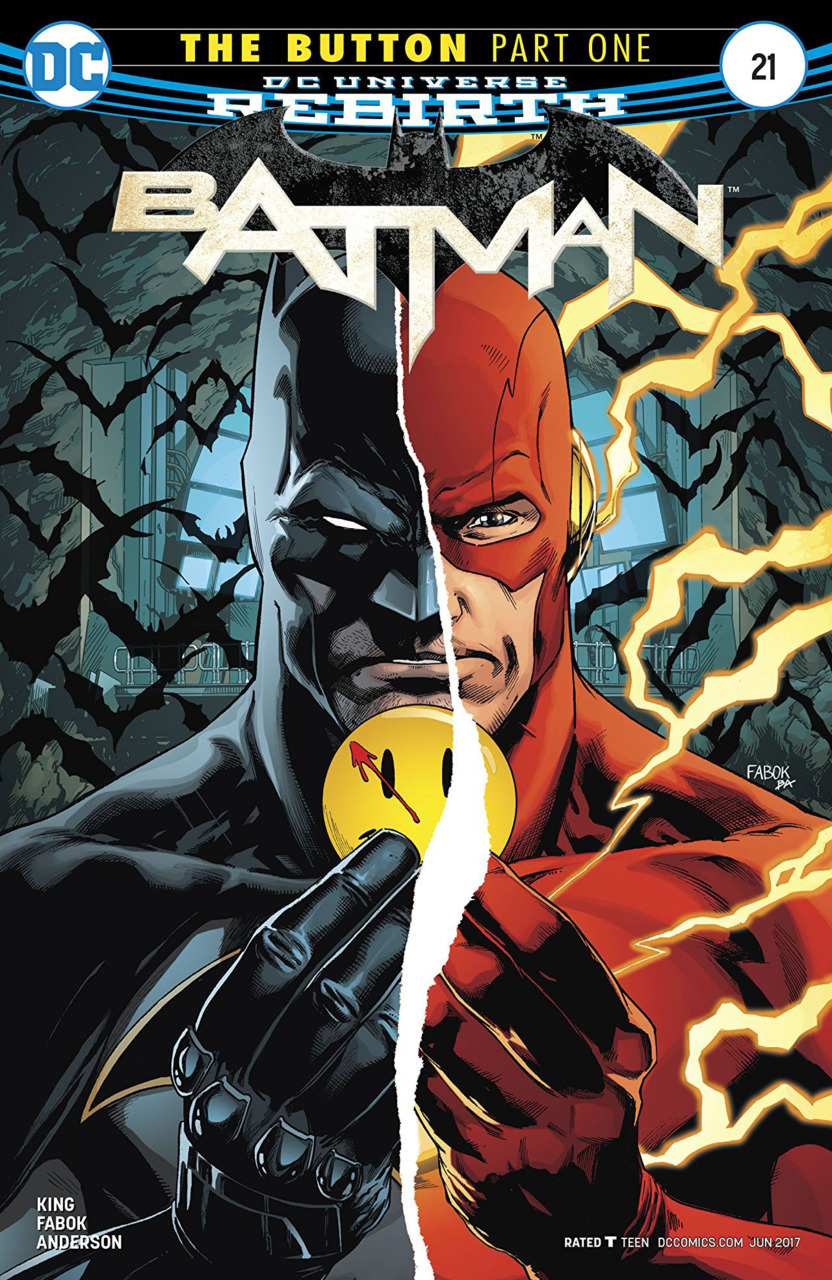 Rebirth has been more than a simple rebranding for DC Comics in the past year.  It has signaled the coming of something great.  It has drawn in both the coveted “new reader” market as well as brought back lapsed readers, myself included.  The New 52 was ambitious, and building Rebirth on top of that has been equally so, but at the same time a simple, logical step forward.  The past year has been riddled with hints as to the overarching story of Rebirth, but with the beginning of the Batman/Flash crossover “The Button,” we seem to be heading towards our first helping of answers.  Let’s dig into the action first, as there’s going to be a lot to cover. Spoilers ahead.

The issue kicks off with the return of Saturn Girl, still held in Arkham Asylum watching what else besides playoff hockey?  (As of press time the Blackhawks are down 3 games in the opening round of the NHL playoffs in the real world, things aren’t looking good.)  As opposing players begin to fight, Saturn Girl begins to lose control, realizing that this game is connected to an important death that no one could stop.  It seems that this fight holds larger implications than just the Western division.  In the Batcave, Batman pulls double duty monitoring the game (I have to assume he’s a Gotham Blades fan) while examining the button that was shot from the Speed Force last year in “DC Universe: Rebirth.”  What follows is an extremely effective, tense build up with four subsequent nine panel grids showing Batman knuckle-rolling the button like Doc Holliday while the hockey fight intensifies.  The only narration is that of the commentary of the game as things progress dramatically, to the point of the commentator becoming uncomfortable with how long the fight is being allowed to go.  The panel layout, an homage to Watchmen and Dave Gibbons, is the perfect delivery method, bringing a sense of gravity to an otherwise innocuous moment.

Batman tosses the button back to the counter of oddities where Psycho Pirate’s mask is also laying, only for the button to seemingly react to the mask’s presence, causing an electrical discharge.  The result is also a momentary image of the Batman from Flashpoint, Thomas Wayne.  (When the Flash went back in time to save his mother’s life he created the alternate reality “Flashpoint” where, amongst numerous other changes, Bruce Wayne was killed by the mugger and Thomas Wayne became Batman.)  Seeing this image drives Batman to contact Barry Allen, the Flash, the only other person who knows the button exists.  The Flash is busy dealing with something dramatic, so he says he can meet Batman in a minute or so, once he ties that up.  No sooner have they disconnected than Batman acknowledges the arrival of a speedster, only to be sucker punched by Eobard Thawne, the Reverse Flash (or Professor Zoom, I’m not sure what he goes by these days).  Thawne was recently freed from Iron Heights in the pages of the Flash and revealed that he remembers Flashpoint and being killed by Thomas Wayne.

This brings us to the action of the issue.  Batman versus speedster.  Not a match-up I was expecting, but one I’m excited for nonetheless.  If anyone’s going to be able to outsmart a speedster, it has to be Batman, right?  We easily slide back into the nine panel grid layout as the fight ensues, with Batman getting another hefty beat down, although not on the same level as the one he recently received from Bane.  Thawne does not do much in the way of a monologue as is the tradition with villains, just the basics that he’s been drawn there by a power.  Throughout the interactions the reader gets a clock showing exactly how quickly time is passing by until the minute is up and the Flash should be arriving.  While momentarily breaking between beatings, Thawne finds the letter from Thomas Wayne that Flash brought back from Flashpoint, and destroys it, an emotional gut punch to Batman.  Thawne begins showing some hubris and toying with Batman after this, an obvious mistake to everyone except himself.  While gloating about being intangible, Batman pulls a Batman and realizes there must be some part of Thawne that is physical to keep him standing.  A batarang through the foot later and Batman is back in the fight.  The momentary resurgence doesn’t last long as Batman reveals he knows he’s outmatched, he’s just holding out for the rest of the minute until the arrival of Flash.

Unfortunately, Flash is running late, after having stopped by the hockey game only to find the player died on the ice.  After putting Batman down with a one last punch he takes the button and blinks away, following the power coming off the button, I assume.  He is only gone momentarily, before coming back badly burnt, a la (spoiler alert) a certain meth-trafficking fried chicken vendor in Breaking Bad.  Mumbling about having just seen God, he collapses as the rest of his body decays away, leaving only his skeleton to be found as Flash arrives.  End part one.  I told you there was going to be a lot.

Questions, questions, and more questions.  Those are my thoughts after finishing this opening chapter.  I wasn’t expecting answers right off the bat, but if the breakneck pace of this issue is any indication as to how the rest of the story will play out, I don’t care.  I’m in.  King has scripted a subtly complex story that’s crammed into the course of a few minutes.  At first we thought Saturn Girl was referring to the hockey game, but at the end we’re left wondering if she was actually referencing the fight between Batman and Thawne.  Regardless, the foreshadowing was fun and a good way to quickly break into the issue.  Was the God Thawne saw Doctor Manhattan?  Did be blink over to the Watchmen universe or some neutral dimension where Manhattan is?  Since Thawne remembers Flashpoint, it’s very possible he also remembers the post-Crisis pre-52 universe that preceded it.  Death rarely sticks in comics, but it is even more rare with speedsters so I wouldn’t be terribly surprised to see Thawne back in action by the close of the story, regardless of how great a death scene that was.  It was brutal and poignant.  The DC Universe has quite the problem on their hands.

Having Jason Fabok at work on these pages is great.  He did stellar work with the larger-than-life aspects of Justice League vs. Suicide Squad, but seeing him scale down for this much more intimate work was impressive.  The nine panel layout can be constricting or claustrophobic, but Fabok rides it like a wave, changing angles and distances and keeping everything brisk.  It was a treat as every page had another trick to it that kept things from getting monotonous.   Brad Anderson is a worthy fill in for Jordie Bellaire.  His monochromatic Batman plays wonderfully with the colors inherent in the Flash characters.  The two worlds are very different, but the art team fits them together seamlessly and nothing feels out of place.

“The Button” has kicked off in grand fashion with a quick, emotional opening punch of an issue.  As we look forward, I’m hoping to get some more light on what exactly Rebirth is all about.  I don’t need all the answers, but one or two would be appreciated.  The worst thing I think DC could do right now is leave us even more confused after the end of this crossover.  I don’t see them doing that, however.  Fan service has been a big part of the Rebirth initiative and they’ve built up a lot of good will in my book.  This opening chapter continues that trend.  I’ll see you next week with second part of this story in The Flash #21.