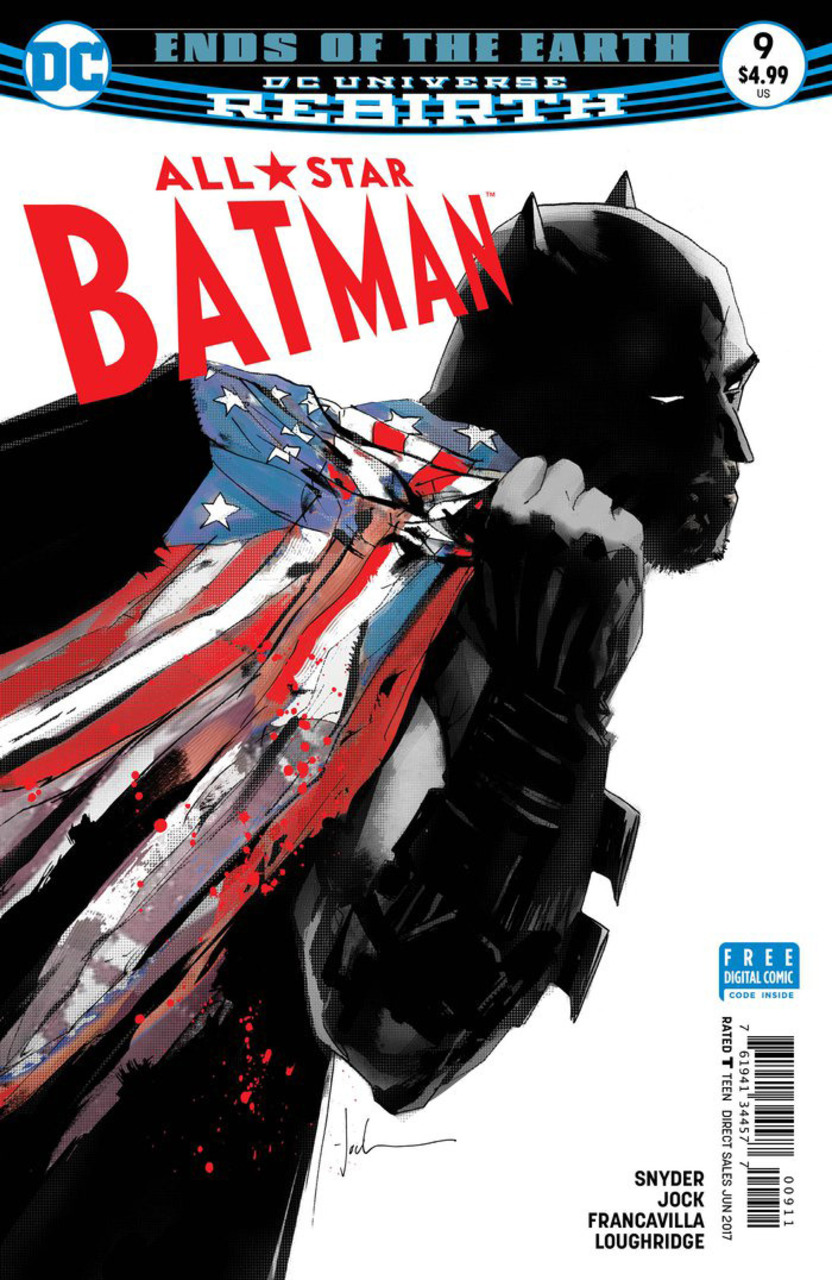 To catch you up: A few issues back, an ancient bacteria was released from the ice in Alaska, and has spread across the North-Western corner of North America. Everything it touches dies, but fortunately, Batman has stopped it from spreading any further. Now he has to kill it, before it mutates and starts to grow again. But to do that, he must find out who is responsible… not Freeze, not Ivy, not Hatter–someone else is behind this. We just don’t know who, yet.

Synopsis (Spoilers): Batman is racing through the streets of Washington DC On his bike, with several militarized helicopters following close behind. The Blackhawks have taken down Batman’s GPS and weapons systems on the bike, and plan to put a bullet in Duke’s head if Batman doesn’t bring in the man responsible in nineteen minutes. So Batman makes his way to Washington Monument. He gets a call through the tower, and begins to talk to the man behind this all. Batman says he found something that led him to this place. It was a Daemon. The man in the tower grabs a sniper rifle, and pulls the trigger. Destroying Batman’s bike, and sending him into the body of water. The man speaks of the monument. How it reminded him of a great sword from his homeland. But now he realizes that it’s not a sword, but a pen. And it writes the story of Ra’s al Ghul.

Ubu grabs a glass of champagne to celebrate, and watches as the world falls into decay. Before the cork is popped, Bruce Wayne has taken down Ubu and chucked the bottle at Ra’s head, disorienting him for a second. Ra’s realizes that it was a trick all along. Bruce wasn’t in the costume…it was Selina, as we see her getting into a submerged vehicle piloted by Alfred. Ra’s unsheathes his sword from his cane, while Bruce fights back with a bayonet armed musket. The “Daemon” that Bruce found, it was code for something else. A DMN — digital multilingual nano-processor. It can slip into any circuit and take it over, rewriting it into whatever Ra’s wants. Ra’s tells Bruce the story of demons from a thousand years ago. How he could never practice scientific studies because it was deemed to be the work of demons. He tells him that in order for the human race to survive this era, millions must die. And like a doctor cutting away the rot to save the body, so he will do what he must for the greater good. However, a demon always stops him. Always gets in his way. Batman has stolen his title of Head of the Demon, and Ra’s al Ghul is here to take it back. Ra’s mocks him for not seeing what needs to be done, and to think that he once called him Detective.

Ra’s knocks Bruce out of the building, and uses the tip of the monument as a broadcast signal for the DMN; causing nuclear power plants to melt down, electromagnets to malfunction, and oil pipes to burst around the world. Bruce tries to radio the Blackhawks, but Ra’s reveals to him that they are his assassins in disguise, and have been following him to throw him off. Bruce pleads with Ra’s to at least spare Duke. Ra’s responds by taking the sniper rifle and shooting Bruce in the head… he tells Ubu to kill Duke, and Ubu informs him that it’s already done. Ra’s watches from his tower as the rot is cut away.

And then Bruce gets up. And the hole in his head starts to close up. Ra’s is starting to believe that Bruce truly has become a demon, and Bruce tells him that he has over ridden his system and instead, broadcast an alert to the authorities, telling them of Ra’s plan and of the fake Blackhawks. The champagne bottle that he hit him with earlier has tech from Mad Hatter and Freeze, along with pheromones from Ivy. Everything he thought happened, didn’t. He’s been staring at a light in the sky.

Ra’s jumps from the monument and a Man-Bat creature catches him as they fly away. Bruce dives after him, but misses and falls. Before he hits the ground, he’s caught and saved by a soldier clad in black, who tells him that they’ll be watching. Ra’s gives a voice over, telling us that the demons will come back… it’s start with a single phone going black… then everything will fall. A woman recognizes Bruce, and pulls out her phone to record him… and her phone goes black.

Analysis: Scott Snyder gives us an amazing conclusion to Ends of the Earth. I really dug how Batman traveled across America in these four issues, and there was a different villain in each book. Even though it ended up being a four-part story, seeing a different villain each issue really broke things up nicely. I also like the direction Snyder chose to go. Getting in the character’s head is a great way to get to know him, but we’ve been in Bruce’s head plenty, and especially with multiple Batman books out every month, the third-person perspective really adds to how the artist tells the story. I really like Ra’s al Ghul as a character, but find his purpose kind of blurred. Here, Snyder really flushes out what Ra’s is trying to accomplish, and does it in a modern fashion that I loved. It reminded me of Christopher Nolan’s Batman Begins. Another thing I loved was how he drew symbolism between the two. All of Batman’s enemies reflect him in some way. And the first thing you are going to think of when you see a humanoid figure at night with wings and horns isn’t going to be “A giant Bat-Man!”, it’s going to be “Demon!” That would terrify people on another (more spiritual) level. And Ra’s being considered the Head of the Demon really adds to that symbolism. So Batman seemingly stealing his title adds a personal, metaphorical touch on top of the predicament placed before them.

Jock really killed it on art. I really do think he’s my favorite artist on Batman. I love the mood he brings to the book. The raw, unrefined lines add life to each panel, making it feel as though you’ve stepped into that world. The art can sometimes feel disorienting when he wants you to be, making it all the more trippy. Lee Loughridge does a great job coloring here, also contributing to the mood of the book. He doesn’t do anything too crazy here, as he chooses to keep a simple look, and it works well. It’s just enough to make you feel like Washington D.C. is a place in the DC universe, without making things feel exactly like Gotham. It was a nice way to blend the worlds.

Francesco Francavilla’s art is pretty, but I don’t understand what exactly happened in this story. It’s broken up so weird, I wish they would have just waited, and just put these backups into a single issue story instead. Maybe things wouldn’t be so confusing and boring then. I just don’t feel like backups should be a continuing story. If you have to do them, I prefer how Snyder and Tynion did them in Zero Year – Very short, and sometimes metaphorical stories that add to the character. Definitely not a place for major plot or story developments as there’s just not enough room to make that work. Steve Wands does a good job lettering here, however, I may have witnessed his first misstep as there was a panel where Bruce and Ra’s are going back and forth, but the balloons were coming from the same character, even though one was interrupting the other. It just through me off for a second, but other than that, the actual text looks great.

Pick Up or Pass: Loved this finale – definitely pick up.

In Conclusion: The team that brought you Black Mirror comes back here, and makes you wish they were still a regular thing on Batman.