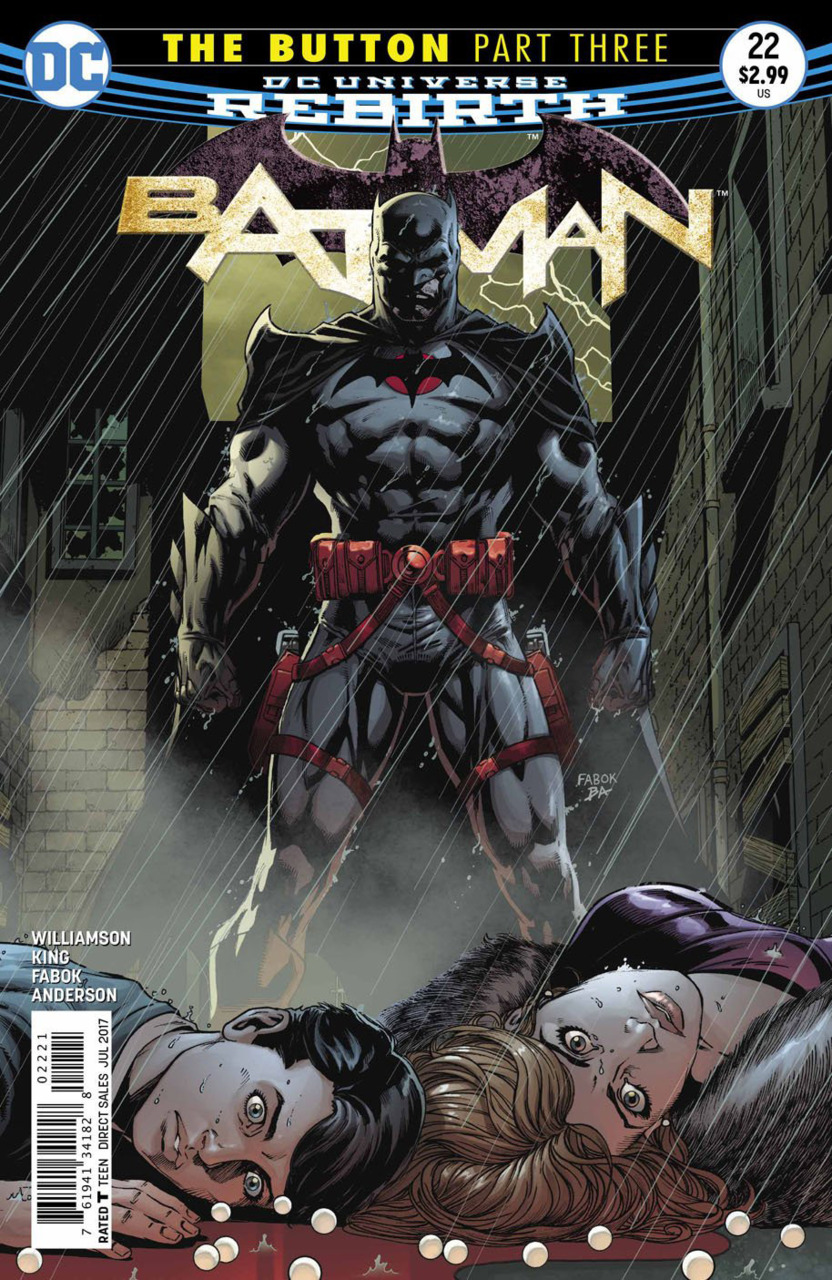 (Spoilers ahead) I’m a champion of Tom King.  I greatly admire the man’s catalog, and even though his work on Batman so far may not have been top notch, it has had its moments.  That being said, Joshua Williamson just scripted the best issue of Batman since the Scott Snyder days.  I just wanted to get that out of the way first.  The man’s made a strong case for himself to pick up the reigns on a Batman title in the near future.  What brought me to this unexpected statement?  I’m curious myself because I went into this issue without much in the way of expectations.  Williamson to me has always been a mid-tier writer with solid ideas and adequate execution.  Let’s dig into what exactly what when down throughout this frantic installment of “The Button.”

We open in the Flashpoint timeline, moments before the arrival of Batman and Flash.  Here, we find out that the timeline is somehow still alive, long after Flash left to fix everything.  Thomas Wayne is waiting patiently in his Batcave for agents of Wonder Woman and Aquaman to come and kill him.  Flashpoint was a weird, wonderful place.  Anyway, Batman and Flash arrive there, following the energy trail of the titular “button.”  The reunion is brief, as the slightly-more-than-paranoid Thomas Wayne believes their presence is a trick.  However, Flash is able to check the vibration frequency of their reality and determines that it is in fact their universe, just a different timeline.  (Multiverse Fun Fact #3139:  All universes sit atop each other, but are on different vibrational frequencies.)  Somehow, Flashpoint exists still, just like the alternate timelines the duo saw during their trip through the timestream (“Rebirth” overall plot hints, ahoy!).  Flash sets about repairing the damaged Cosmic Treadmill while the Batmen have a team-up and deal with the waves of goons coming to remove Thomas Wayne from Wonder Woman and Aquaman’s ongoing disputes.  The Batmen, of course, triumph with ease.  What’s a few Atlanteans and Amazons against a pair of Waynes?  The reunion is cut short, however, as whatever force was holding Flashpoint in existence lets go and the universal remnant begins crumbling.  Our Batman attempts to get his father to come with them, but Thomas Wayne refuses and sends them on their way as he finally faces his end in the deteriorating existence of Flashpoint’s final moments.  Back in the time stream the duo encounter a not-yet-barbecued Eobard Thawne, on his way to meet the hand of God and his own death.

That’s a lot of stuff packed into twenty-one pages, which is absolutely a credit to both Tom King and Joshua Williamson, as they co-plotted this installment.  While the story moved at a frantic pace, all of the moments seemed fully fleshed out and I don’t feel like we were shorted anything.  The strength of the issue, however, really came in the character moments that Joshua Williamson crafted with his dialogue.  His Batman rang true to me.  It was a different take on Batman than we’ve seen in the past years, but one I instantly recognized.  Somewhere between Snyder’s verbose approach and King’s mute one, a middle ground that I’ve missed.  The reunion between father and son was touching, made even more so by Flash’s assertion that they are in fact father and son, not simpler alternate universe versions of each other’s family.  This is Bruce Wayne.  This is Thomas Wayne.  And the Thomas Wayne of Flashpoint is a treat, an “Old Man Logan” version of Batman, one worn down from years of isolation and violence.  He welcomes his eventual end, and getting to share the last few moments with his son made everything worthwhile for him.  His last request is for Bruce to give up the Batman mantle and focus on being a father, what Thomas Wayne couldn’t do in his timeline.  Batman should die with him.  It was very powerful and the gravity of it took a moment to sink in.

Jason Fabok continues to do what he does best – puts out a great, basic comic story.  He is far from a flashy artist (forgive the pun), but the quality of his presentation is on the top tier of DC’s art stable.  His art flows well with the story and they never find themselves at odds, with one overpowering the other.  His Batman may be my favorite Batman in some time.  He beats out the current crop of big-name artists like Janin, Finch, and, dare I say, Capullo.  I also have to comment on the costumes.  I absolutely hated the New 52 costumes with the body-armor like lines breaking up the coloring on the characters bodies.  I’m not one to go to extremes like that, but ever since the closing panels of Flashpoint I’ve had strong feelings about them.  I became used to them over the years, but this issue was the first I really noticed that they were absent from Flash.  I don’t know if that was Fabok, or if in Williamson’s book his art team removed them as well, as I don’t pay much attention to Flash’s art as I’m not a fan of their rotation.

As the clues about Rebirth come together, I like that Flash is also slowly putting together the pieces.  It’s comforting knowing that the timelines and events I am more familiar with still exist out there.  I can’t imagine at the end of the Rebirth story the previous timeline will be completely reintegrated, but I hope some elements are brought back.  This was a very strong installment.  “The Button” may have slowed down a little bit last issue, but if this issue is any indication, we’re heading towards a blistering finale and, just maybe, some answers.