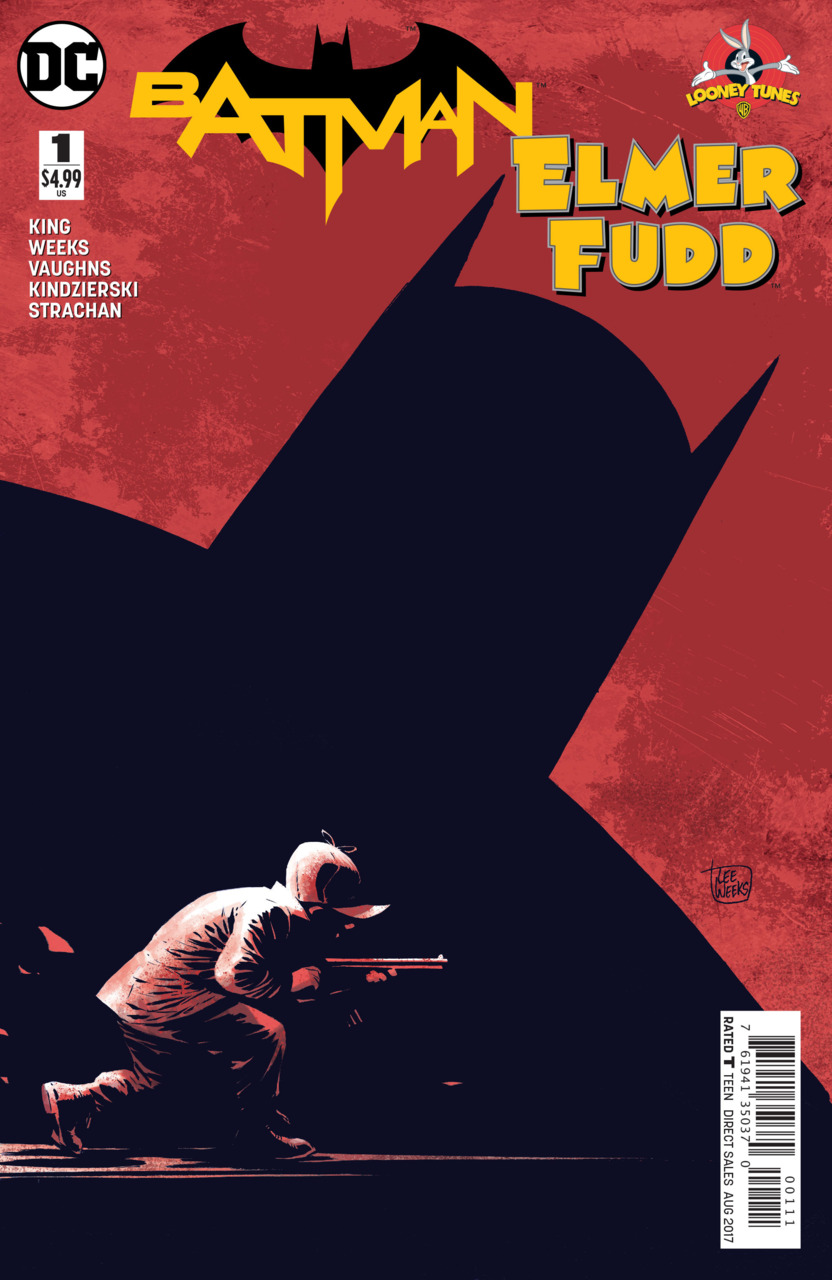 Overview: After the apparent murder of Silver St. Cloud, Elmer Fudd teams up with Batman to seek justice for her death.

Synopsis (spoilers): On a rainy night in Gotham, Elmer Fudd walks into a bar owned by a man named Porky Pig. Fudd talks about how life didn’t always use to be so dark. He states that he is hunting “wabbits”. The man on his list is a low life known as Bugs “The Bunny” who is seated at the bar eating carrots.

It becomes apparent that Elmer is there to kill Bugs for murdering a woman. Even in the face of death, Bugs still makes jokes about murdering the woman. As Elmer finishes his drink, Bugs offers one last chance to save his skin. He offers up the name Bruce Wayne as the man who paid him to kill the woman. Elmer leaves satisfied with the information and begins his new hunt for a billionaire playboy.

Disguised as a limo driver, Elmer infiltrates a party at the Wayne Manor to confront Wayne. At the party, Elmer draws his shotgun and shoots Bruce point blank in front of his guests saying that it was for his “wittle cwoud”. It’s revealed in a flashback that Fudd was in a relationship with Silver St. Cloud.

Returning to his hotel room after having thought he killed Bruce Wayne, Elmer provides the last bit of backstory surrounding the death of Silver St. Cloud and the lone carrot he found in a pool of blood near her dressing table. Inside the room, Batman is waiting for him and the two fight briefly in the apartment before Elmer says why he tried to kill Wayne. Now motivated to bring Silver’s real killer to justice.

Arriving at Porky Pig’s, the two begin to fight the less than hospitable crowd until they confront Bugs. They ask him why he actually killed Silver St. Cloud since Bruce did not orchestrate the murder. Before Bugs has a chance to answer, however, Silver St. Cloud appears at the end of the bar and reveals that it had been her behind the whole mystery. She said that she needed to get away from men who had a “darkness” in them like Elmer and Wayne. Batman asks her what she will do now to which she answers that she is leaving and the boys are staying in the bar. With that, the three men order a carrot juice drink and sit quietly realizing they had all been duped by the same woman. Elmer ends the issue remarking how it may be duck or “wabbit” season for a time, but eventually, everyone has their season.

Review: Going into this special issue, I really was skeptical and not excepting anything special. One page into this issue and I realized I was way off on what I was expecting this story to be. Instead of a crazy, lighthearted adventure, Tom King delivers a dark noir story centered around a cold and calculating Elmer Fudd. The dialogue was fantastic in this issue and the banter between Elmer and Bugs was certainly the high point. I didn’t even mind that Batman was out-shined in this story.

Coupled with this great story and writing, the artwork here was perfect in keeping with the gritty tone of the story. Lee Weeks took these traditionally goofy character designs and re-imagined them as much more mature and dark human versions of them. I definitely won’t be able to look at Bugs Bunny the same way after seeing this murderous and sociopath version that the art team brought to the pages in this story. Colorist Lovern Kindeirski also deserves a lot of credit for painting this story with those muted and often bleak color tones that helped to portray the noir feel this story had.

Overall, I really liked this story and the new take it had on the Looney Toons characters within the Batman Universe. King proved he can write dark noir stories without pulling from a lot of Gotham-centric themes. Although maybe not the most kid friendly story, it nevertheless paid homage to a collection of Looney Toons characters and their usual motives (although slightly darker here) which I enjoyed.