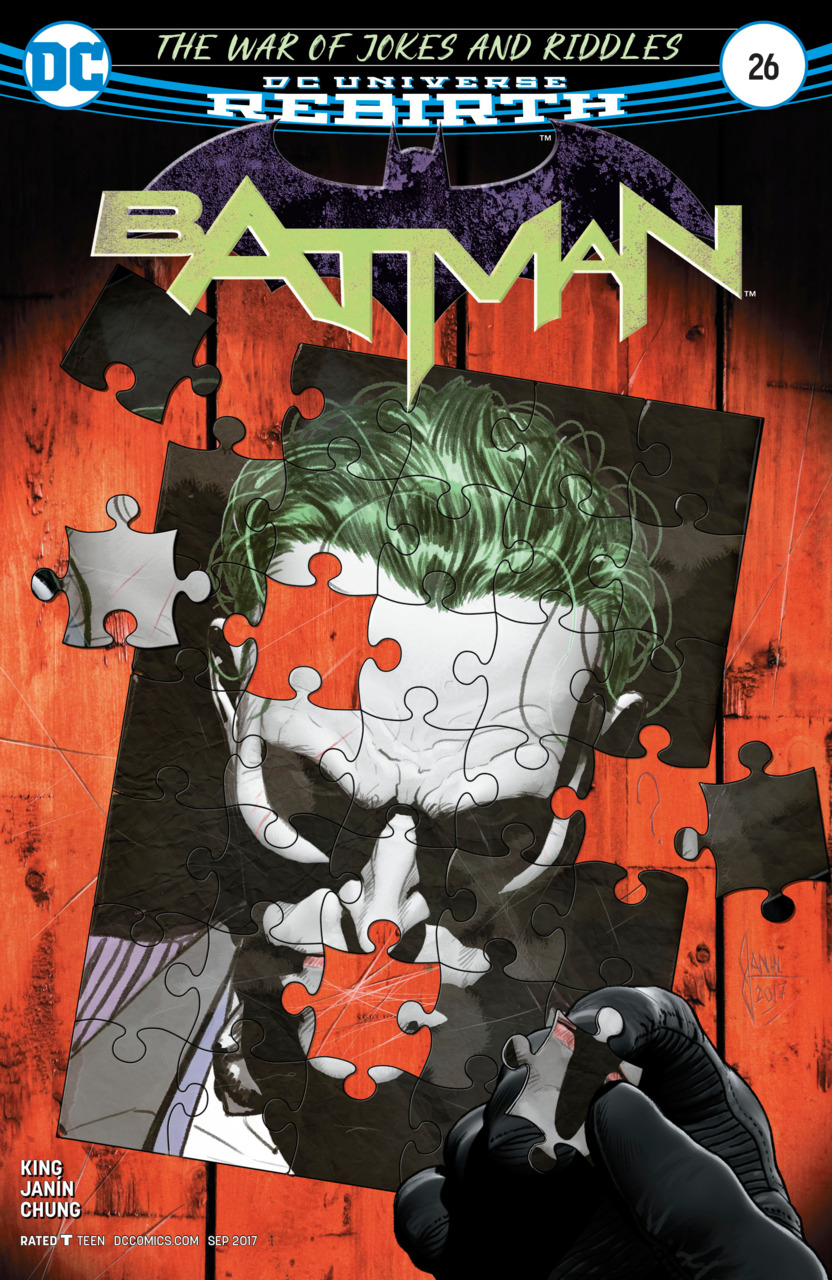 (Spoilers ahead) “The War of Jokes and Riddles” carries forward in Batman #26.  The Riddler, obviously, has survived Joker’s assault and bounces back rather quickly for a man who has just taken a gunshot to the gut.  I’m not a qualified physician or anything, but I feel like he should maybe be taking it easy instead of getting patched up and heading out on a day-date with Poison Ivy.  That’s just me though.  Again, not a doctor.  Regardless of the Riddler’s preternatural ability to bounce back, he strikes the first public blow of his war with the Joker, the uncharacteristically candid and quite public statement that he will kill him.  Joker responds in kind, by having a hit put out on his foe through noted Mafioso Carmine Falcone.  Thanks to Poison Ivy’s intervention, the hit does not go as planned.  Joker, less than thrilled with the developments, presents Falcone with his mother’s teeth, revealing that he killed her in expectation of Falcone failing to complete his assignment.  Joker kills the rest of Carmine’s goons, leaving one low-level goon alive as his new assistant.  One Oswald Cobblepott.  All the while, Bruce narrates the deaths of everyone who fell as a victim to Riddler and Joker’s war, and describes how things are beginning to ramp up for Gotham.

All-in-all, this issue was a quick read that continued to keep me interested in this exploration of a new chapter of the Dark Knight’s history.  It is ostensibly the closing installment of a two-issue prologue to the real “War of Jokes and Riddles.”  These past two issues laid out the limited groundwork of the story and gave brief introductions to the main players.  There hasn’t been a grand opening salvo from either end, just the standard fare of gunshots, threats, and goons.  Again, we also find the issue closing with a spread of what’s to come, leading more credence to my belief that this was more prologue than actual story.  With an honest second chapter of a larger story I really was expecting a little bit more.  Throw in the fact that in all honestly the basis for this war seems to be fairly flimsy, and I could have some concerns about the sturdiness of the story.  I’d like to see more expansion on why the characters have this friction between them as we go forward.  I hope it really doesn’t all fall back to their meeting in Batman #25.  The gravitas of the title alone makes me hope there is significantly more going on than just escalation towards the “scorched earth” Riddler speaks of.

Thankfully, Tom King is firing on all cylinders when it comes to his narration and dialogue. This simple fact has made me forgive the majority of my concerns regarding the basis of the story.  He’s telling it well enough that I don’t care.  I want to see what happens and how things escalate.  This is a version of the Joker that I am much more interested in seeing than in Snyder’s run.  He reminds me of how things used to be.  Less unhinged maniac, more calculated terror.  Also, I really enjoy Bruce Wayne’s narration of the events.  Things are already interesting, but by adding in this through-line of everyone who dies due to Joker and Riddler’s actions and everything is amped up a little bit.  I’m hoping the device continues as it has won me over.

Mikel Janin is probably the most competent of the artists we’ve seen on this book, narrowing edging out Fabok and Gerads, two powerhouses in their own rights.  His style really feels at home the past two issues, especially considering the stark difference of them taking place, for the most part, during a daytime setting.  Something we aren’t much familiar with in the Batman world.  He started to impress back in “I Am Suicide” with his dynamic panel layouts and page designs.  Here he tries to capitalize on some of that, but it doesn’t work as much and it almost feels like he’s trying too hard.  Some of the panels seemed to be more cluttered than usual, possibly due to the significantly expanded dialogue and narration on King’s part.  And, sadly, I’m really not a fan of the question mark on Riddler’s chest.  Add that to my already voiced concerns about the size of the man’s sideburns and I feel like Janin might be personally doing this to upset me.

If King can keep up this quality of writing, gripes aside, this could easily be the standout run of his Batman career.  To date, “Rooftops” is the story to beat when it comes to King’s Batman.  If things continue on this path, we could have a new contender.  There are problems of course, but I’m not under the illusion of King, or anyone for that matter, creating the perfect Batman story.  The key will always be whether or not the story is interesting enough to make up for the problems.  In this case, we’re looking good.