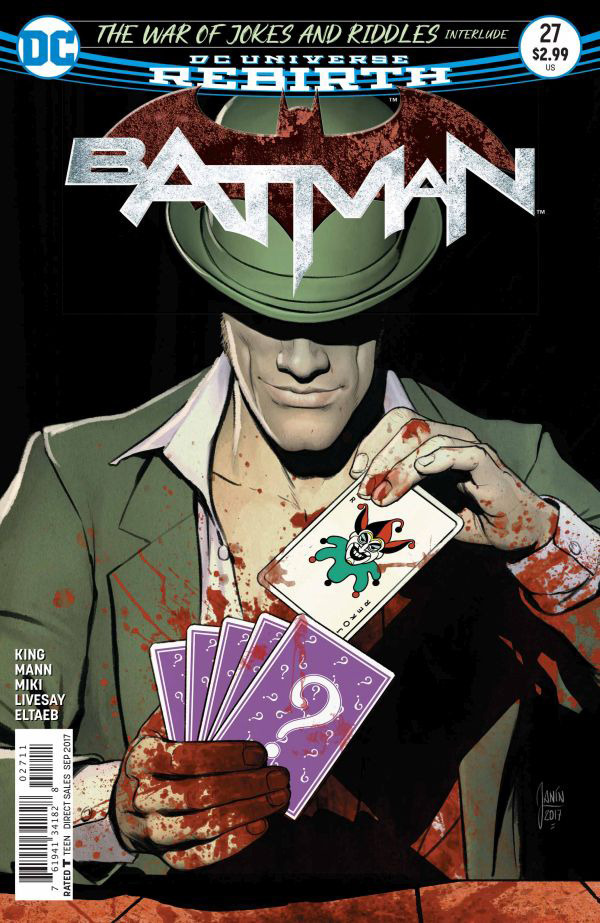 (Spoilers ahead) Love him or hate him, Kite Man is here to stay.  His presence in Tom King’s Batman run started innocuously enough, with a number of brief cameos mostly played for laughs.  Here in the pages of an interlude during “The War of Jokes and Riddles,” however, Kite Man is making his play for the big time, both in the story and in page time.  And you better grab your tissues, kids, ‘cause this one gets heavy.

The story is simple enough.  Charles “Charlie” Brown, alter ego of the ne’er do well Kite Man who has yet to take up the hang glider, is an educated thug.  He’s helped Joker in the past, so Batman uses him to set up a meeting, which the Bat can then crash and, hopefully, put an end to the war tearing apart Gotham.  What follows is a comedy of errors, wherein Brown finds himself the target of all the main players, Batman, Riddler, Joker, and Deadshot (literally… Floyd uses Brown to help calibrate his weaponry).  He finds himself bouncing between the factions, doing everything he can to protect his estranged family, most notably his young son, from the fallout of his misspent life.  Things don’t play out well, as punishment for betraying him, Riddler poisons the kite string of the younger Brown’s toy.  While Batman promises vengeance, Brown takes matters into his own hands, fashioning his Kite Man rig and joining Joker’s side.

I want to start off by saying that this story is far better than it has any right to be.  Kite Man is a joke of a character from the early 1960’s whose resurgence this past year, complete with “Hell Yeah!” tag line, has delicately walked the line between being humorous and overplayed.  Giving the character back story seemed absurd at first, but giving the character this degree of backstory is just crazy enough to work.  And I want to be extremely clear, this is an absolutely heartbreaking backstory peppered with Tom King’s signature, dry tongue-in-cheek humor.  A mix I was definitely not expecting when I broke into this book.  King has given us a new view of Kite Man, right down to the dark history of his signature catchphrase.  He is an everyman with a little bit of talent whose choices have pushed him down a path that eventually broke him, causing him to become something else.  Across the board King’s writing was on point throughout the first installment of this interlude, and I’m really beginning to like his interpretations of the characters of Joker and Riddler.  Riddler is quiet, menacing, and one step ahead of us, whereas Joker’s almost depressed, dead pan delivery is juxtaposed against his traditionally manic portrayal.  More than anything, I want to see how these characters play out against one another.

As this is an interlude issue, Mikel Janin gets a break while Clay Mann picks up the penciling duties, doing a solid job.  While the pages aren’t nearly as polished as what we’ve come to expect from Janin, there’s a definite talent here.  This is especially true when we look at the fairly frantic pace of the issue.  We breeze through a number of scenes and locations with a score of characters, always keeping Brown as our touchstone.  With all the activity it could be easy to get lost, but Mann guides us through without things getting overly choppy.  Mann is one of DC’s newer talents, having made his interior debut for the publisher in last year’s Poison Ivy miniseries, as well as relieving Francis Manapul for a few issues of Trinity.  For a fill in artist, he’s as good as you could hope for.

I’m trying to not sound like I’m heaping praise on this book, despite the fact that I was surprised how much I enjoyed it.  I do still have some series questions about “The War of Jokes and Riddles” that I’d really like some resolution to.  To paraphrase noted chaos mathematician Ian Malcolm, perhaps someday we’ll have some war during this war of jokes and riddles?  This is the fourth issue of the storyline and we’ve yet to really see any serious action.  The books so far haven’t been short on the implication of the seriousness of this conflict, but it’s largely happened off panel.  This is beginning to try my patience.  I want to see the build-up that has already seemingly happened.  I want to know why villains are choosing sides, not just that they have.  I want reasoning.  I want action.  The beautiful two-page spreads of all the characters involved have been great, but I’m ready for more.  I’m ready for King to really let go and get something going.

That being said, do you think we’re far enough along that we can get some theories going as to what Batman’s big action is that he’s seemingly ashamed of?  My guess has to be that it has something to do with Joker getting his groove back.   Will Batman be the one to make Joker laugh again?  That would certainly be something that would weigh on Batman’s conscience.