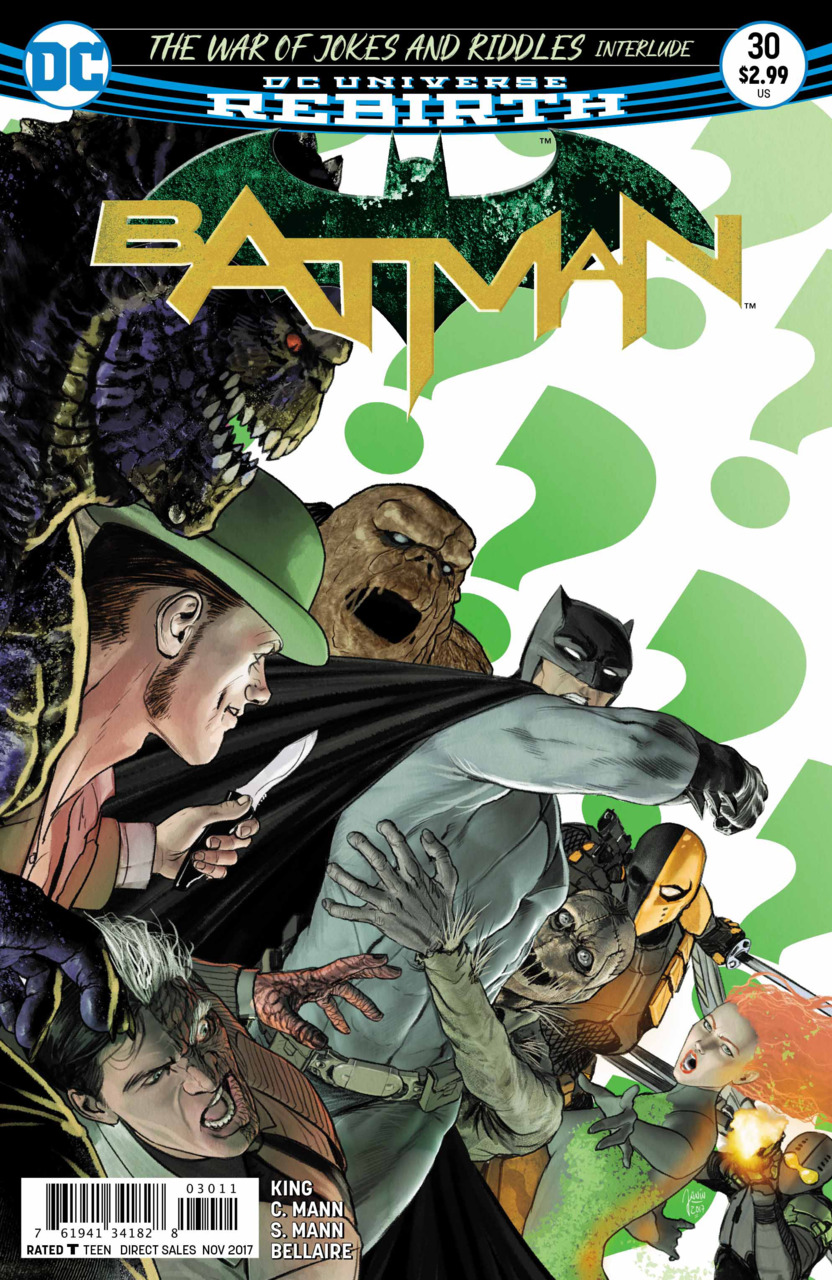 Overview: Before we head into the third and final act of “The War of Jokes and Riddles” we take one last pause for an interlude.  As the war continues, it takes its toll on everyone involved.  We view the action through the street level eyes of fan favorite (?) Kite Man as everything builds towards a head.

Synopsis (spoilers ahead): This issue is made up of a series of quick team-up vignettes wherein Kite Man is partnered with various villains from Batman’s rogues gallery.  As one can guess, their missions go sideways thanks to interference from Riddler’s crew.  Did I mention Riddler’s crew now has the Batman counted among their numbers?  Tweedle Dee and Tweedle Dum.  Ventriloquist.  Man-Bat.  Mr. Freeze.  Cluemaster.  The Mad Hatter.  Each has their own take on the situation and belief that they will be successful where others have failed, but one by one they fall to the likes of Two-Face, Scarecrow, and even the Batman himself.  Eventually the field is paired down to just Joker and Kite Man, who meets his eventual defeat at the hands of Batman before being interrogated by Riddler.  It seems our friend Kite Man is the last of Joker’s army and the most likely to know where the clown has gone now that it seems he has been defeated.

Throughout the vignettes, there is narration expanding more on Kite Man’s relationship with his late son, who met an untimely end thanks to Riddler.  In the expository tale, the son questions whether or not Kite Man is a joke like his ex-wife said.  In response, he tells his son a take on the Greek legend of Sisyphus who was cursed to roll a boulder uphill only for the boulder to roll back down again, restarting the process.  At the end, he makes the point that however unsuccessful you may be, you’re not a joke until you give up.  He echoes this throughout the book as he continually keeps trying, even to the point of getting back up after being repeatedly knocked down by Batman.

Analysis:  While the previous interlude, Kite Man’s tragic origin story, somewhat stalled the overall narrative of King’s arc, this interlude does the opposite.  While slowing things down on one level to focus on the villains, we do get a great deal of progression in the story.  Mainly, the reveal that after making his decision last issue, Batman chose to team with Riddler’s side in the war.  An interesting development as many were expecting him to team with Joker, cementing that as the decision he regrets from this time period.  Looks like that mystery will remain unsolved for the near future.  The diversity of the cast was great in this installment.  King handled the writing well and nothing felt overly crowded, despite the large cast of characters.  We were able to get a handful of quick moments which left a lasting impression.

The theme of getting back up is one we’ve seen repeatedly in various mediums.  The script was somewhat flipped in that this story focuses in on the villain’s perspective.  That being said, I know the current incarnation of Kite Man has more villain-ish leanings (what with his high-flying thievery), but this younger version of the character seems to really be involved more out of a desire for revenge on Riddler than anything else.  I can’t believe I’m saying this, but I wonder if we’ll get more of Kite Man’s story showing his life after the war?  Regardless of whether or not this is the end of the unprecedented revival of Kite Man, this was an emotionally powerful story casually slipped into a interesting arc.  King has been steadily picking up speed with a lot more hits than misses in recent issues.  I’m happy for him, he deserves it.

Clay Mann was on point throughout this entire issue and is making a strong case for himself and his inker brother, Seth Mann.  The page layouts were interesting and captivating without becoming distracting.  The flow was nice despite the jarring transitions necessitated by the vignette-style script.  It can’t have been an easy undertaking, and Mann handled himself well.  Attentive readers might remember I was an overall fan of his work back in issue #24, but did have a few concerns.  He made a lot of headway in righting those concerns in this issue, though, and I’d love to see him back as a fill-in artist, if not get his own arc on another Bat-Family title.  I talk a lot about the intangible aspects of art, the feelings that go beyond pencil lines, inks, and Jordie Bellaire’s always beautiful coloring.  Mann brings a sense of fun to the pages.  He is developing a good sense of timing and visual storytelling I hope to see more of.  He has a lot of promise and a bright future.

Final Thoughts:  I’d really have liked to have seen the conversation where Batman latches his cart to Riddler’s team.  Sadly, it looks like this isn’t that story.  Maybe someday we’ll get to see it if Tom King continues on the book as long as Scott Snyder stuck with it.  That’s probably my main gripe.  All of this story is packed into small moments and we lose a lot in the shuffle.  I understand that’s King’s approach to this arc, a high level recap showing Batman’s train of thought throughout an intense period of his life.  I just find it interesting enough that I want more.  Luckily, we still have the third act to go so things probably aren’t as wound down as we might think they are.