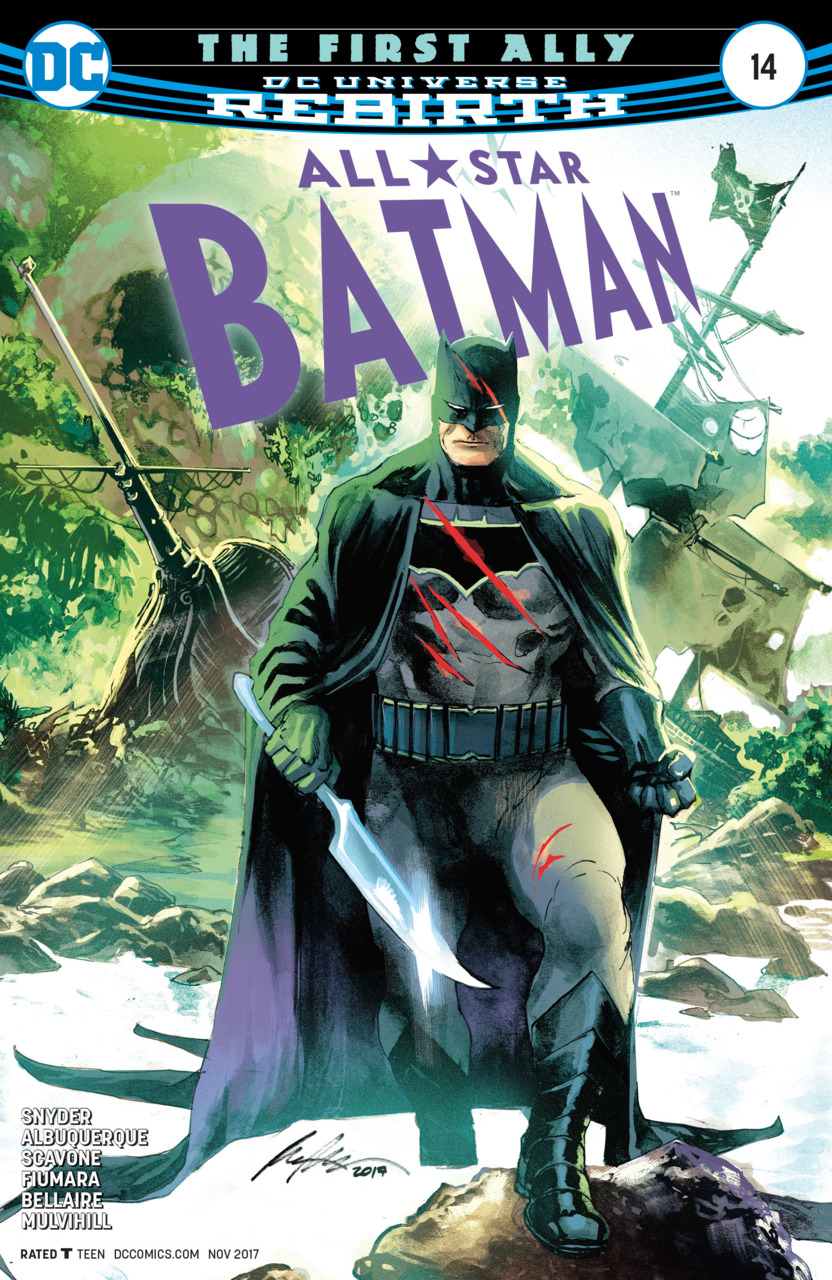 Synopsis (spoilers ahead): We open with Alfred talking of how he loved pirate books when he was younger. The stories they told of adventure. How they were generally about growing up and returning home. His favorite parts were the climactic fight at the end between the young hero and the grizzled captain…

Then – A young Alfred is chasing after a plane and catches it in time to jump into an open door just before takeoff. Once inside, he takes a shot at the controls to get Briar’s attention. Briar admits to being on his way to Gotham to kill Alfred’s father, but is doing it to make Alfred what he needs to be. Alfred tells him that he does love his father, and that he nearly loved Briar as a father figure as well. Briar shows him the helmet he made for him. He begs him to take the crown, but Alfred rejects it. Briar, now disappointed, decides that he will not watch another Knight die for being “soft” and attempts to kill Alfred himself. However, with no one at the controls, the plane is spiraling to the ground. Being pinned with a Bowie knife at his throat, Alfred reaches out for the helmet and smashes Briar across the face with it, knocking him out. Alfred grabs a bag containing his father’s information and jumps from the plane.

Now – Briar and Nemesis have Batman tied to a chair, as they fly over some islands. Batman is searching for the picks he stashed away in his cheek, but Briar knew about that trick… he taught that one to Alfred. Batman guesses that Nemesis is Briar’s son. Saying he remade him using “The Stylus of Life” – which is a more basic version of the Genesis Engine. Briar imagines how he’ll be able to make the perfect Nemesis now that he has the Engine.

Alfred, in a pirate plane, pulls up next to them. He quotes a meme from the internet about Batman, and shoots a machine gun at the plane, taking it down. He parachutes down to the island below, promises to pay the pirates who helped him get there, and gives us a Bat-fact on the past of this island. He finds a seriously injured Batman in the rubble, and Nemesis finds them as well. Briar gives the order to kill them and Alfred fights back. Nemesis overtakes him, but before he can kill him, he’s hit from behind by Batman. His helmet now off, his face is revealed to be…. ALFRED?! Briar fights Alfred while Batman fights faux-Alfred, but quickly begins to loose the fight. Batman tried to reach out to any part of Alfred left inside him, while Briar gives the order to “kill the one bloody thing you could possibly care about on this planet!”, and he does so… he stabs Briar right through the heart. He picks up his helmet, and walks away.

Alfred reflects on his first day at the manor. The grandfather clock his father wound instead of being with his family. Alfred feels uncomfortable in his ill-fitted suit. The gloves are too tight. He smashes the face of the clock, and finds dozens of letters his father wrote to him, but never sent. He looks them over with tears in his eyes, but is interrupted by a small voice. A young Zoro-clad Bruce invites Alfred to play a game with him… Alfred stands in front of the grandfather clock. It’s face is now fixed. Bruce informs him that Hush and the Black and Whites are recovering. He also tells him that he has a tracker looking for Nemesis, but nothing has turned up yet… And that he still has the Genesis Engine… he doesn’t know what he should do with it yet. Alfred hugs him, and the two go into the cave through the clock.

Analysis: Scott Snyder’s finale has its ups and downs here. The last few pages are some of the strongest stuff he’s written in this series recently. The pacing was much better this issue than the last. The scenes blended together nicely, transitioning from one period of time to another seamlessly. The plot kinda just ran together and ended abruptly without resolution. Alfred is still written inconsistently. His voice changes depending on what he needs to be at the moment instead of letting him react naturally. We are continuously told how Alfred is the baddest dude around, but never really see it. Instead, he’s just doing what he’s told, or acting very much out of character. He’s cursing all the time, which adds up with his punk phase, but wasn’t brought up until a few issues ago. It’s like Alfred has another personality that we are just now seeing. He just freaking shot down an airplane that his surrogate son was in with a machine gun, and was “scared” for him after the fact. Even Bruce calls him out on his ridiculousness. And speaking of Bruce, Batman gets his butt handed to him every time he encounters Nemesis. He never really put up a fight. It was pretty sad. The moment with Alfred, the grandfather clock, and young Bruce was adorable. I’d read a whole issue of them playing. Alfred’s relationship with his father is heartbreaking and built up to be a powerful moment in the book. As we close, the uncertainty and lack of a moment that loops everything back to the beginning of the series makes this feel like just the conclusion of an arc instead of the end of a series… which it was supposed to be. I feel as though editorial may have made a mistake in moving around Snyder’s plans for the book, hurt his creative process.

Jordie Bellaire’s colors are striking. The mood she brings to this book captures the spirit on the page. Her use of lighting, the palate she uses, the daring color choices (the purples, mostly) it is an amazing work of art. I also love the touch of random brushstrokes throughout this arc. Steve Wands’ does a solid job lettering here. He doesn’t do anything too crazy here. He keeps it simple, but that paid off here. It never once stumbled my reading experience, and his placement was always spot on. Rafael Albuquerque’s art this issue was back to what I’ve come to expect from the guy. His use of inks to fill the backgrounds makes the landscape feel a bit more lived in, even though he’s not actually drawing anything there. I like his design of the pirate island. The skull cave was a nice touch. My only complaint was the reveal that Nemesis was Alfred. His faces can sometimes be a weak spot, and I had trouble knowing who it was until I read the caption. Otherwise, his acting is great, as well as his storytelling. The emotions bleed through the page.

As a writer, Albuquerque along with Rafael Scavone, tell an interesting story of Batman infiltrating a Russian mob to prevent the shipment of weapons to Gotham. It’s basic in its premise, which is good for a backup. As soon as things get slightly complicated, you’re going to loose your audience with there being so few pages. Sebastian Fiumara really impressed with his work here. His art looked incredible every month. I wouldn’t mind seeing this guy do an arc or two on Detective. The amount of story he’s able to pack into a page blew me away. Considering I’ve never heard of this guy before, I was very impressed with what I saw. Trish Mulvihill had some help with Lee Loughridge early on, but quickly took on the work all on her own. Her colors are very beautiful, often using opposites to balance out the page. Her go to this issue (with all the fire) was lots of blues/oranges with purples/yellows. Lots of good looking stuff from this art team. They all did a great job.
Dezi Sienty letters the backup. His letter boxes looked great, his placement was solid, but I didn’t care much for his sound effects. He got a little too funky here and chose some fonts that I didn’t feel like worked. But he was solid, and look forward to seeing more from him.

Final Thoughts: This series was like a rough plane ride. It took off quick. It was exciting. It had lots of turbulence… but then it got you where you wanted to be.