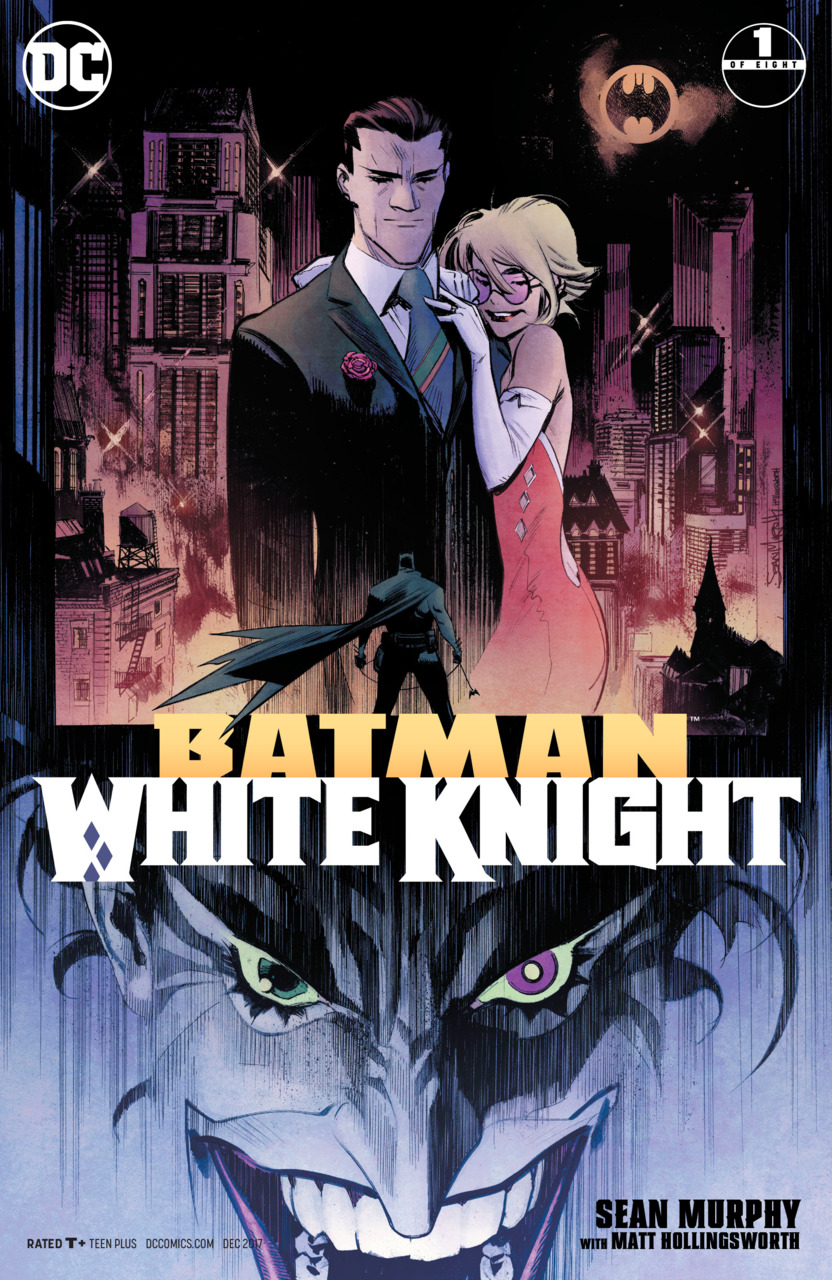 Overview: The opening issue of this Elseworlds tale explores the relationship between Batman and the Joker and sets the stage for Joker’s journey to become Gotham’s “White Knight”.

Synopsis (spoilers ahead): Jack Napier, an apparently cured Joker, arrives at Arkham Asylum to visit an imprisoned Batman and ask for his help with something. Flashback to a year earlier and Batman, Batgirl and Nightwing engage in a high speed chase around Gotham to apprehend the Joker. Joker is eventually subdued by Batman in a brutal manner in front of the entire GCPD and his aforementioned sidekicks. Joker claims he can get better with the use of pills and get the city back on track.

While news and media debate the methods and presence of the Batman, the Joker recovers at the hospital while being observed by officers Gordon, Bullock and Montoya. Meanwhile Barbara and Dick berate Bruce for his brutal methods in his office. Bruce eventually takes them through a secret passage to reveal an ill, bed-ridden Alfred. Bruce also reveals he has been working with Freeze and using his tech to keep Alfred alive.

Commissioner Gordon and Gotham’s mayor have a heated discussion in the mayor’s office about Batman’s partnership with the GCPD and the public’s reaction to Joker/Napier’s arrest. Dr. Leslie Thompkins arrives with the results of Napier’s recovery and psychological evaluations. She claims the mysterious pills have cured the Joker from his condition. Napier is now sane, with a genius level intellect and is working in the Arkham library on a legal case against the GCPD, Gotham and Batman.

Gordon, Montoya and Bullock go to visit the imprisoned Napier where Napier reveals he has photographic evidence against the GCPD that proves their connection to the Batman. He also claims that Gotham deserves better than all of them and decides to become her “White Knight”.

Analysis: Before I get into the review, I would like restate that this is an Elseworlds tale. It’s fine if certain elements do not conform to your individual ideas of what or who Batman is. To fully appreciate this issue, I’d advise the reader to have an open mind, think about the narrative and what it’s trying to tell us and, most importantly, just enjoy it for what it is. The best thing I can say about this issue (out of many great things), is that it gets you to think about things and ask questions. Some of these questions you may have the answer to, some may cause you to revise what you originally thought, and some you may be undecided on. The point is that they are fascinating to think about and it adds an extra layer of sophistication to the narrative.

That being said, right off the bat (no pun intended), we encounter an example of the strong subversive theme that is an undercurrent in this story with regard to the Batman and Joker relationship. In a moment that is a staple of every Batman story, we are led to believe that Batman is arriving at Arkham Asylum via the Batmobile to see a patient or prisoner. Only this time it’s actually Jack Napier, formerly the Joker, driving the Batmobile and coming to visit an imprisoned Batman.

Murphy also gets us to confront the inherent absurdity of superhero stories by placing the characters in a more “realistic” world. Batman and Joker are portrayed as two individuals in costumes who are endangering lives and property to act out some type of fantasy. Joker alludes to this performative aspect of their relationship later on when he judges Batman’s methods. Making Joker an obsessed fan of Batman is a stroke of genius in my opinion. It is consistent with the character’s obsession with Batman while also being a commentary on the entertainment culture of society today.

Where the script really shines is when it talks about whether the city is better or worse because of Batman. Generally speaking, the Joker is at his best when he challenges Batman’s existence on an ideological level. Their conflict isn’t about physical punches as much as it is about challenging the very core of each others identity. This story accomplishes this in the most compelling way I have ever read in a comic book and is very similar to the Dark Knight movie in this regard. Is Batman fighting crime as some sort of therapy or is it about justice? Does the Batman need a villain as evil as the Joker to validate himself? Is Batman reproducing a cycle of violence with his methods? Is Batman guilty of recklessly endangering the lives of children by making them sidekicks? These are all reasons why the Joker believes that Batman is actually the villain of this story.

The Gotham news show debating the methods of the Batman is similar to how media was used in The Dark Knight Returns to comment on how we as a society might look Batman. The complexity of the issue is presented beautifully within just one page. How should we approach Batman’s brutal treatment of the Joker when he’s only ever been convicted of armed robbery? Do we as a society treat people according to our perception of their guilt in court, or in the court of public opinion? Do we care if vicious criminals like Joker get due process and fair treatment? Would we really want a Batman to do the things we want to do but can’t do because of the law?

The story also addresses elements of vigilantism. We are typically fine with vigilantism in superhero stories because they are always right. They never go over a line they can’t come back from and they never beat up the wrong person. This is alluded to when Batgirl asks Batman how he knows the roofs won’t crumble when he drives over them and when Batman gives Joker a cocktail of drugs without knowing exactly if they would cause any damage or an overdose. Theoretically a “righteous” vigilante would have no personal agenda. In White Knight, we see Batman use more brutal methods because he is understandably personally affected by Alfred’s illness. Who holds him accountable for this and for the damage to private property incurred during Batman’s crusade?

Mental health within the context of the justice system is another theme that’s an integral part of the story. Joker has apparently been cured of his condition. Upon hearing this assessment from a qualified professional, Gordon and the mayor are immediately skeptical. I immediately started to wonder if Batman would ever believe that Joker could be cured. Of course in regular comic book stories, the Joker can never be cured. But what about in a more realistic world? How would Batman react if the Joker was cured? Is a cure as simple as taking pills? Does the Joker himself want to be cured?

Napier’s case against the GCPD and Batman appears to be a very strong one from what has been revealed because he does have a legitimate case. A cynic (or a realist depending on who you ask) would say that this is another one of Joker’s gambits and he’s using this to fight Batman. It’s certainly an intriguing strategy for him to take because it’s hard to get a vigilante to testify in court. Batman fights with his fists not with the law. It will be interesting to see how this plays out in the coming issues. Our entertainment obsessed culture loves nothing better than a redemption story so it will be interesting to see if Napier plays up this angle to get public sentiment on his side.

I’ve talked a lot about the story because of it’s depth and polish, but I’d be remiss if I didn’t mention the art. The art throughout is nothing short of spectacular and Hollingsworth’s colors are stunning. Even among such incredible art, there are three pages that really stand out in my opinion. The first is the page of Batman, with his arms covered in blood, surrounded by the GCPD and his sidekicks as he beats Joker to the point of unconsciousness. The red lighting and the shocked expressions of Batgirl and Harvey are contrasted by Batman’s clenched jaw and steely reserve to do what he deems necessary. The second page is the trippy dreamlike sequence that goes through the major moments in the Joker’s life. It conveys so much pain and darkness in just a page. The level of minute detail is incredible, if you look closely you can read the headlines on the newspapers and the material on Joker’s comedy sheet. The heart of blood dripping off Harley and onto the Joker’s head and hands was also a nice touch. The third page is where Joker wakes up in his cell surrounded by Batman memorabilia. The light coming through the bars and casting a shadow over the bed is a thing of beauty. Murphy also pays homage to every part of The Batman Universe from the Animated Series, to Christopher Nolan’s trilogy, to the Killing Joke, to Lego Batman etc. It’s easy to spend many minutes going through all of it to pick up on the references. Of course doing that maybe makes us as big a fan of Batman as the Joker is. Maybe that’s part of the point.

The color palette is simple, but vibrant and I feel like that works well with Murphy’s pencils and the tone of the story. One aspect that I really liked was giving the Joker two different colored eyes. The Joker’s eyes in the panels where he’s being beaten up by Batman burn with intensity and emotion. The eyeliner running down his face paints him as an even more sympathetic figure. The superhero costumes, namely Nightwing’s jacket and Batman’s gloves, also have a sporty look to them that I found refreshingly different from the typical look.

Final Thoughts: Every year in sports there are new faces who are touted as “the Next One” at a very young age. Rarely do any of these prospects live up to the expectations and hype. When White Knight was announced, I (along with many others) had very high expectations for the book, but I did wonder if my expectations were so high that I would inevitably be disappointed. Not only did the premise sound intriguing, but anyone familiar with any of Murphy or Hollingsworth’s previous work would have to be excited for new projects. After reading the first issue of White Knight, I’m convinced that the opening issue has surpassed everything I hoped it would be. People have speculated that this could be this generation’s version of The Dark Knight Returns. If this first issue is any indication of what comes next, I would go so far as to say that this might even be better. This series has the chance to be to Batman comics what The Dark Knight is to Batman movies. I can’t wait to read more.