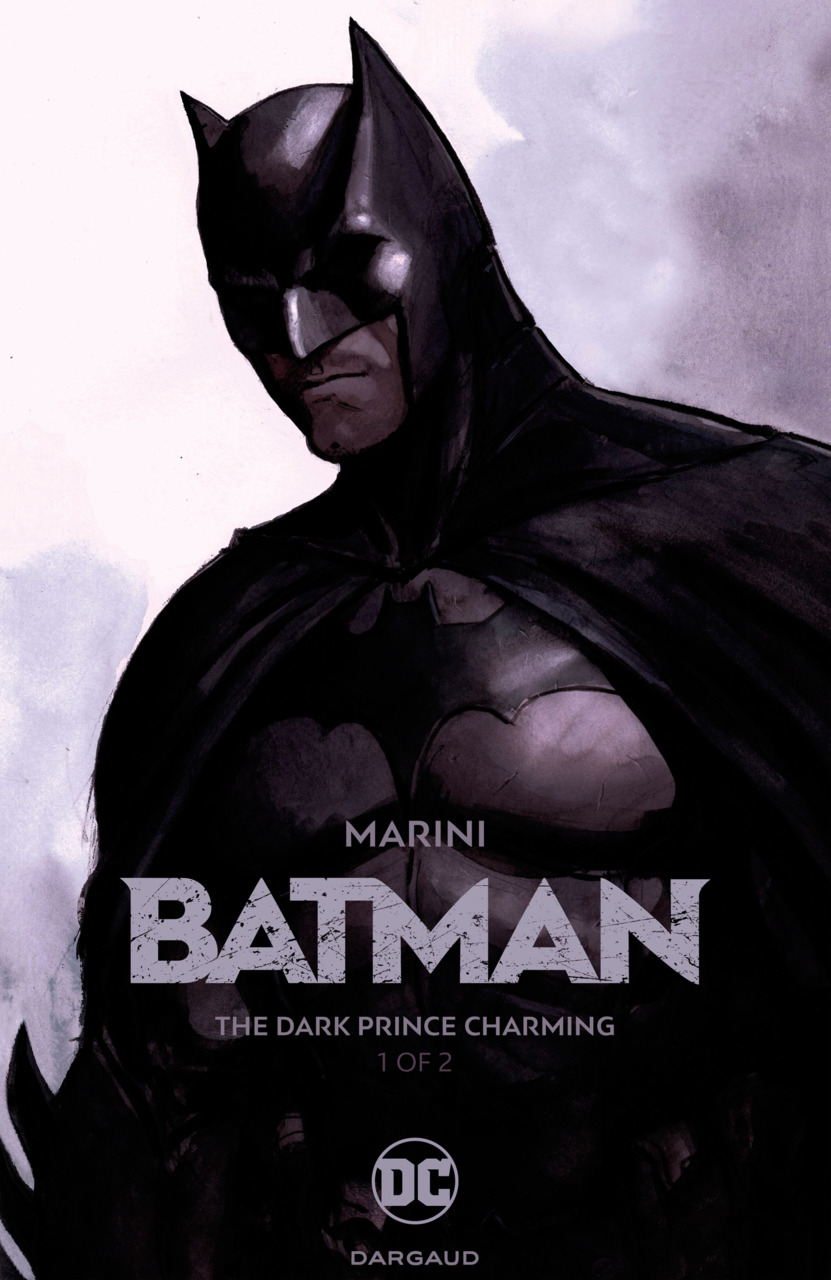 Overview: A girl who may have a connection to Bruce Wayne is kidnapped by the Joker, causing Batman to embark on a frantic quest to find her.

Summary (spoilers ahead): The story starts right in the middle of things as Joker enters a basement where he is keeping a little girl captive. Elsewhere, a mysterious present in green and purple wrappings is delivered to Bruce at Wayne Manor.

The story then jumps back in time very slightly to a high speed car chase involving Joker, Joker’s crew and the GCPD. Catwoman crashes the chase claiming that Joker stole pearls that were her’s to steal. Catwoman retreats as Batman swoops in to try and subdue Joker and his henchmen. The chase ends in a collision that results in the Joker going over the side of a bridge while still in his car. He surfaces on the river bank where no one can see him, but is frustrated that he has lost the pearls. Batman has a talk with Gordon on the roof of the GCPD precinct where Gordon emphasizes that he wants the Joker brought in if he survived the fall.

Back at the Joker’s hideout, Joker arrives in the middle of birthday party preparations for Harley Quinn. Since he lost the present he was going to give Harley, he decides to make a new necklace from the teeth of one of his lackeys who happened to make a joke at a very inopportune time. Harley is upset at the gift and storms off, causing the Joker to “fire” all but one of his henchmen by killing them. The Joker and Harley then watch TV together where they see that a precious diamond is to be auctioned off soon. Joker switches to the gossip channel where he hears that a woman named Mariah Shelley has filed a paternity suit against Bruce Wayne for 100 million dollars alleging that he is the biological father of her young daughter. Joker finds this very intriguing, tells Harley that he now has an idea on how to get her present and tells his remaining henchman to recruit a new crew. Batman has also been watching the same news broadcast in the Batmobile and appears upset at the news.

The story flashes back to three months earlier when Mariah brings her daughter Alina to see Bruce Wayne. He claims not to remember Mariah and is surprised by the presence of Alina. Bruce notices some puncture marks on Mariah’s arm and dismisses her by telling her to get a good lawyer. As Mariah and Alina leave, Bruce looks on from his bedroom in the company of Selina Kyle. He says he has to get back to work and leaves Alfred to deal with an infuriated Selina.

Back in the present time, Mariah and Alina are in a car with their lawyer when the car is then hit by a huge truck being driven by the Joker. Moments later, Batman and Gordon examine the crime scene and Gordon explains that the lawyer is dead, Mariah is in critical condition and Alina has been taken by the Joker.

Joker is keeping Alina in what looks like a basement and brings her pizza from a delivery person that he killed. Alina is defiant and claims she’s not afraid because Batman will come to save her. Joker leaves her with a toy version of himself that has a hidden camera as one of the eyes. Back at the Batcave, Bruce and Alfred run DNA testing on the blood found on Alina’s toy that was left at the crime scene. The result is not revealed to the reader, but Alfred says Bruce would not like it, and Bruce himself reacts with complete shock. Batman interrogates one of the Joker’s henchman at GCPD and obtains an address, but it only leads to the place where Joker killed his crew during the party. He continues his search for answers on the streets of Gotham and eventually crashes into Killer Croc’s club. Batman subdues all of Croc’s crew and demands to know where Joker is. They end up fighting outside, and Batman beats Croc to the point of being delirious as Catwoman looks on from a fire escape.

The story then skips forward a little bit and it’s revealed that Batman has searched tirelessly for multiple days and still hasn’t found her. Alina is entertaining herself by drawing caricatures of Batman and wondering why he hasn’t come to save her yet. Meanwhile, Joker is getting ready with a to-do list that includes “get the diamond, kill the Batman, order sushi”.

Analysis: The first part of this two part story tells an out of continuity mystery story that has the feel of an action thriller. It’s not an extremely deep or complex story, but it does a good job setting up the world and presenting an engaging plot. As an Elseworlds tale, this is extremely important because it gives the reader a baseline for their expectations on new or unconventional interpretations of different characters. The three biggest mysteries from this book are: “Does the Joker know Bruce Wayne is Batman?”, “What is the relationship between Alina and Bruce?” and “What exactly is Bruce’s relationship to Selina Kyle?”. I think it’s probable the Joker knows Batman’s identity because that would make the Joker’s decision to kidnap Alina more logical. Joker decides to kidnap Alina as a way to get Harley her diamond; presumably by extorting Bruce for money. The question that occurred to me upon reading this was, “Why doesn’t the Joker just steal the diamond and not bother with the kid?”. The kidnapping really only makes sense if the Joker is using it to try and hurt Batman on a personal level, and this could only happen if he knows that Batman is Bruce Wayne. If this is the case, I’d like to see how the Joker uncovered that in second part.

Bruce’s reaction to Alina and her potential relationship to him is perplexing to me. In the traditional continuity, Bruce is a man who has adopted numerous children as sidekicks and has one biological son. While not always being a shining example of what a father figure should be, he has never failed to provide financial aid to the kids under his wing. In Marini’s book, we have no indication that a “Bat-Family” exists outside of Alfred and Selina so it’s possible that Bruce is really just a loner who is focused on being Batman. But even if this interpretation is true, and Bruce is a loner, it seems odd that someone with Bruce’s focus and discipline would have a child. If there is a “Bat Family” in this world, then it’s even more unlikely that Bruce would be so dismissive of Alina. When confronted with the existence of Alina, it seems out of character for Bruce to simply tell Mariah to lawyer up. He’s typically an extremely paranoid person and would likely run his own tests to verify or disprove the claim. I also wonder what specifically happened in Mariah’s life for her to come to Bruce eight years after her child was born. This unknown event could potentially play a role in book two, but hopefully her character’s history will be more fully explored in the next volume. All that being said, I do like the dynamic of Bruce having a daughter. We’ve seen a similar dynamic play out in the main continuity with Damian but, at that point, Bruce had already had a few adopted sons so it wasn’t drastically different from what had already taken place for years. Alina and her relationship to Bruce is one we haven’t really seen before and is a fresh and intriguing direction to take.

While fresh depictions of characters can make a book great, I have to say I didn’t enjoy Harley in this book. I did not feel as if her character brought anything substantial to the main plot. Instead she seemed to exist for the sole purpose of being an object of desire to the Joker and eye candy to the reader. I really appreciate mature Batman stories, in fact I prefer them, but the mature or risque subject matter should still serve some narrative purpose. In this book, there are a couple of panels where Harley is drawn in a certain positions for seemingly the sole purpose of giving the reader a view up her skirt. With the exception of one panel of Bruce, the book definitely skews more towards sexualizing the female characters to a greater degree than the male characters. Selina has a few panels that feature her in Bruce’s bedroom but, while the dialogue in the scene was awkward, I think their relationship will play a role in the plot moving forward. This is hinted at with Catwoman shadowing Batman’s quest through Gotham’s underworld looking for answers on Alina’s whereabouts, so it does serve a narrative purpose. I do not wish to make this particular criticism a bigger deal than it is, but I definitely think it’s worth mentioning.

While I may not have liked Harley in this story and how she was drawn, I think the art in general in this book is some of the best I’ve ever seen in a Batman book. Marini’s rendition of Batman and the Batsuit incorporates some of the best elements from the Arkham games, the Ben Affleck Batman and the Batman from the main comic book continuity. Everything from the shape of the cowl to how the cape is drawn makes this my favorite version of the Batsuit in comic books. I also really liked his version of Catwoman’s costume. It honors the classic versions from the past by incorporating elements from Michelle Pfeiffer’s costume, the Arkham games and the main comic book continuity. The costume also manages to be both practical and sexy; something that a lot of other versions do not manage to pull off simultaneously. Marini’s vision of Gotham City is also incredibly detailed and really manages to capture the soul of the city. We get to see the looming gargoyles, the tall skyscrapers, the rolling fog smothering the bright lights and the overall gloomy atmosphere of the city in this book. Gotham is basically a character in its own right and Marini manages to showcase this with superb skill. Marini also deserves a lot of praise for how he draws his fight sequences. There’s definitely a cinematic quality to them as the panels thrum with energy and there are absolutely no errors with people being out of position relative to a previous panel. There is one small error in the last panel of Alina as she is drawn without her birthmark on the left side of her face, but that’s about the only fault I could find with the art in this book. I could go on about the art, but that really would not do it justice. I think everyone will be more than satisfied with experiencing it in the book as the art is really a love letter to Batman fans everywhere.

Final Thoughts: “Batman: The Dark Prince Charming” is a book that will undoubtedly be a “must own” book for every Batman comic book fan. The story does have its awkward moments, both in dialogue and in characterizations, but it’s an interesting, noir-esque mystery story that features some of the best art you will ever see in a comic book. It’s too bad we have to wait until 2018 for Book Two, but I’m excited to see how this story concludes.