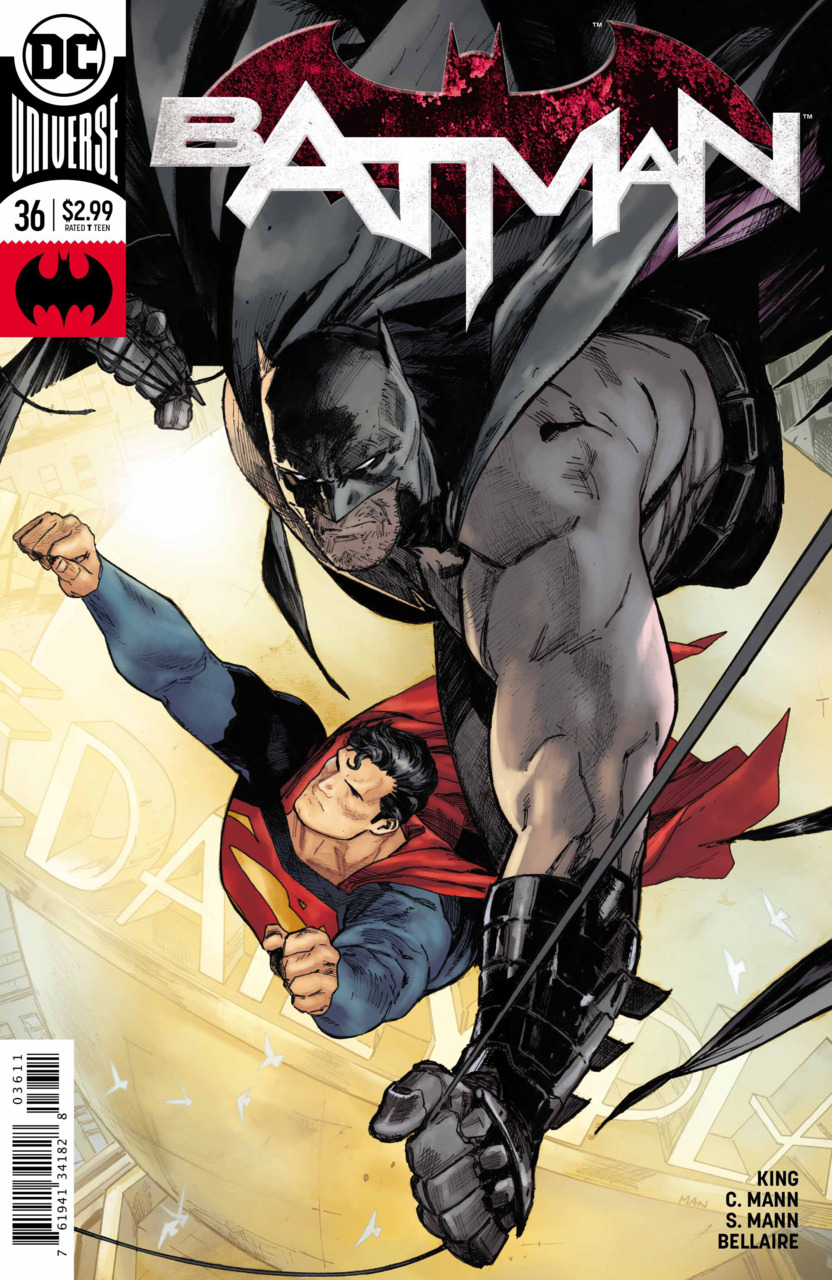 Overview: If you’ve ever gotten married, you’re aware of the hassles that come along with the engagement.  Who do you call first?  Who warrants a call and who warrants a text?  Who is going to be upset they weren’t called earlier?  There’s a lot to be considered and in the pages of Batman #36, Tom King is letting us know that superheroes go through it too.  “Superfriends” kicks off with an examination of the relationship between Batman and Big Blue himself, Superman.

Synopsis (spoilers ahead): As Superman focuses on saving a train from impending doom, he talks with his wife, Lois Lane, regarding the engagement between Batman and Catwoman.  He is of the opinion that Bruce should be the one to reach out, whereas Lois believes Clark should just get over the sticking point and make the call himself.  Clark avoids taking the responsibility himself, as he’s “busy.”  Batman is also “busy” with a similar conversation with Catwoman, who is urging him to reach out himself as Superman is his best friend.  Batman deflects the friendship by bringing up that he is closer to Gordon or Alfred, but Catwoman retorts that the former doesn’t know Batman’s real name while the latter is on his payroll.

Lois is interested in meeting Catwoman, but Clark puts the brakes on since Catwoman is technically a criminal and he doesn’t want to trust her with their secret.  Lois says what’s on everyone’s mind, that if you’re paying attention it’s not entirely out of the realm of possibility that Catwoman’s already put it together.  The duo then split up as Superman has work to do and Lois has a meeting with an informant regarding the train insurance claims from earlier.  Over in Gotham, Catwoman confirms she’s already deduced Superman’s identity and that if putting their secret in the open is what Batman is worried about, he should get past it.  She then brings up that Bruce might be scared to talk to about it with Clark.

Later, Lois calls Clark while he’s out to ask how the conversation went, only to be told it hasn’t happened.  She’s not pleased, but has more information regarding the train insurance claims and a company called “Twenty Corp” that needs looking into, and a “Dr. Axe” who has further information for her.  Bruce and Selina are getting to the bottom of their case, as well, gaining information regarding plutonium purchases by a mysterious “Dr. Tens” who may be a recently released Simon Ecks.  The pair still do not know where the funding for his new lab is coming from.  Catwoman brings the conversation back around to Superman and wonders if Bruce is ashamed of their relationship.  He assures her this is not the case.  As the two couples make their way to their end goal, the men speak about their true feelings for the other and their history, and how in their own way they bring hope to the other.  They tie it back around to each feeling like the other doesn’t really need them.

As Batman and Catwoman break into the compound, they are faced with an elevator that opens to reveal Superman and Lois.  Their two cases are one and the same.  The men are, of course, somewhat taken aback at the other’s sudden appearance while the women introduce themselves and make pleasantries.  The meeting is broken up quickly as Simon Ecks arrives with his doppelganger, Double X.  The heroes make short work of the villain and are presented with the awkward question of what to do next.

Analysis: I love engaged Batman.  There.  I said it.  I hemmed and hawed at first about where the story might take the character, and while I’ve always supported it, it wasn’t until this issue that I fully embraced it.  Now I believe in this story.  I feel this is a much needed shock of life to the essence of the character and I’m hoping it will bring us several great stories over the months (years?) to come.  I still don’t see it lasting long term, but for the near future I’m 100% invested in this direction.

There really isn’t much to cover as the issue was fairly uneventful.  The big takeaway is, of course, getting to hear the thoughts of Superman and Batman regarding the other.  King nailed the dialogue here and the characters really have never felt more real.  The way he spins each origin story to play up the inspirational aspects was heartwarming, and the fact that each man feels, in a way, inferior or unneeded, shows their common respect.  King brought a much needed sense of humanity to these characters when he showed us how human they actually are underneath the costumes, gadgets, and powers.

Clay Mann stole the show in “The War of Jokes and Riddles” with his Kite Man interludes.  They were the high point of the arc, narrowly beating out Mikel Janin’s gorgeous work.  From top to bottom this issue was a crash course in how to succeed at comic book art.  The shading and transitions are note perfect and the back-and-forth storytelling never got jumbled.  We all need more of the Mann brothers in our lives.  Between Clay Mann, Joelle Jones, and Lee Weeks, the fill-in art teams the past few months have been really impressing me and stealing some of the spotlight from regular artists Janin and Finch.  The hidden benefit of these shorter storylines seems to be the exposure of new artists, and I welcome more of them.

Final Thoughts: This isn’t an action blockbuster of a story, but it’s hitting all the right notes.  I’m enjoying Tom King’s take on Superman and Lois Lane and I really look forward to seeing how they play off Batman and Catwoman next issue.  King’s dialogue is fresh, crackling, and flows nicely and the Mann brothers’ artwork is always a welcome addition to these pages.  Rebirth has been bringing back a lot of long-since-past aspects of the DC universe, and the Batman/Superman relationship hasn’t felt this good since the pre-Flashpoint days.