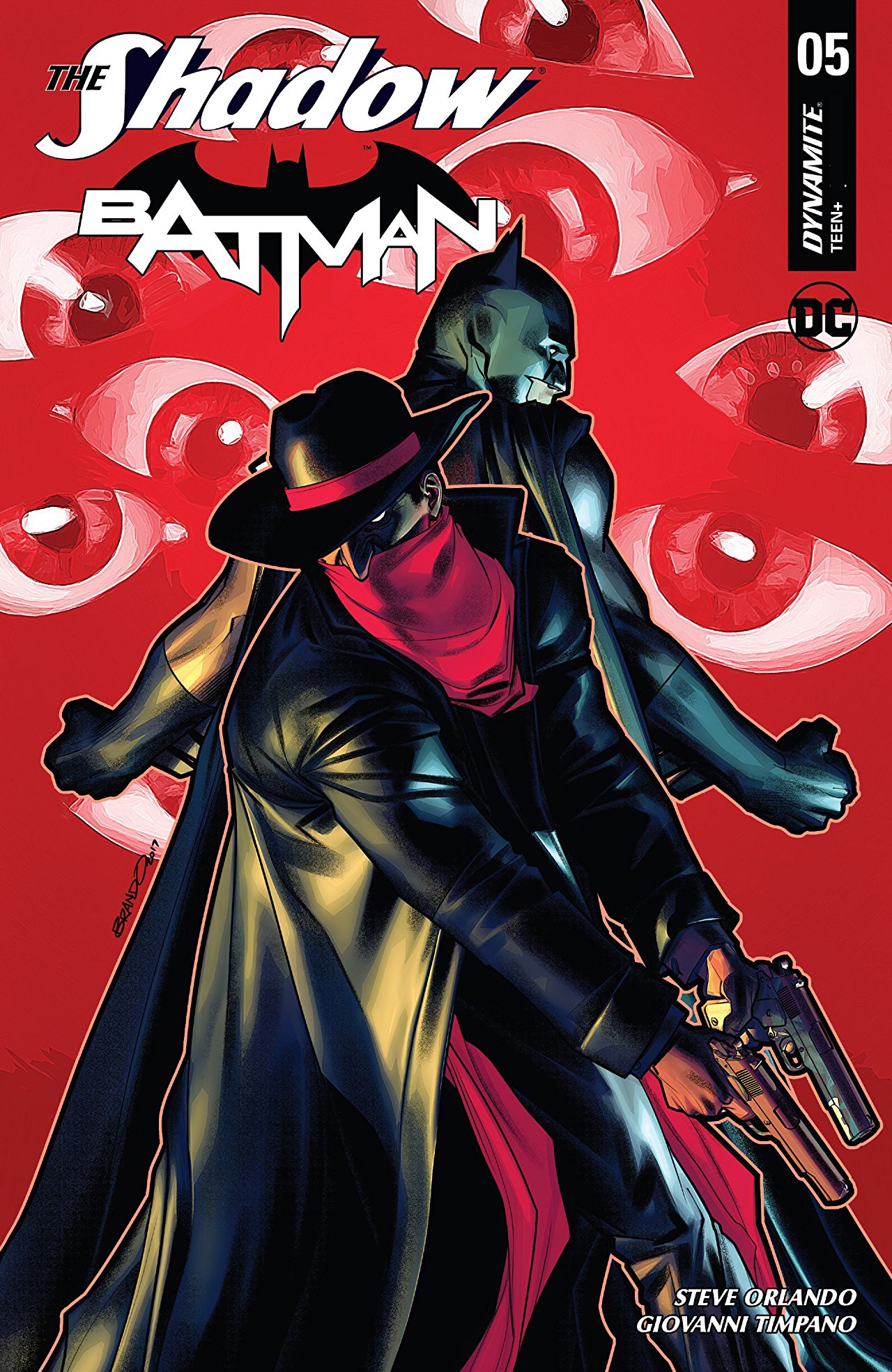 Overview: Robin faces off against Ra’s Al Ghul, the Shadow is tortured by Shiwan Khan, and Batman searches for them both.

Synopsis (spoilers ahead): The story opens with Shiwan Khan torturing the Shadow on the Silent Seven’s headquarters in international waters while telling him about their early days when they were both students in Shambala.

The story then cuts to Robin and Ra’s Al Ghul cross swords in the deserts of the American Northwest. Robin explains that the black box of his crashed plane is emitting an SOS and that Batman will be coming for him.  Ra’s tells Damian that his organization has blocked the signal and that no one is coming.  Meanwhile, Bruce Wayne is at the Batcave, below Gotham Harbor, frustrated that he can’t locate Robin’s location.  Ra’s and Damian fight on, and Robin is defeated after being slashed across the stomach by Ra’s.

Back at the Silent Seven’s base, the Shadow’s torment continues when Khan brings forward one of the Shadow’s operatives, Hawkeye, who tells the Shadow that he was killed operating undercover for the Shadow and that the Shadow didn’t even notice.  Khan turns Hawkeye to dust and then tells the Shadow that even Margo was really under his control.  The Shadow rejects this as a lie and goes on to say that he does not believe that Khan resurrected Batman.  Kahn goes on to talk about how no one sees his story, and the story flashes back to Khan and Ra’s murdering the Silent Seven’s previous leader, James Moriarty.  Ra’s then arrives with his minions carrying Robin’s unconscious body.

Meanwhile, Batman is in scuba gear doing some stress welding while he talks to Alfred about ways to track the Silent Seven.  Alfred and Batman look into the financial transactions that were used to counteract the ones Bruce Wayne used to short the Silent Seven’s financial holdings and finds a pattern and a signal from Damian that leads Batman to discover the Silent Seven’s base.

Khan takes control of Robin who then picks up a gun to shoot at the Shadow, and as the gun goes off, the Shadow struggles to telekinetically stop the bullet as it makes its way towards his head.  The issue ends with a batarang knocking the suspended bullet off course as Batman arrives, ready for battle.

Analysis: I have enjoyed the majority of this series.  The first issue is, in my opinion, flawless and I think the following issues have been quite strong.  That being said, while I enjoyed it, this issue stumbled a bit for me.  The main villains of the book spent a lot of time monologuing at their respective captive audiences, which is not in its self a bad thing.  It’s a time-tested device to explain a villain’s plot and motivations, and pretty much every comic book or Bond film has a moment or two like this.  The problem is that there isn’t any new information imparted by either character, so their dialogue felt very redundant.  Ra’s speaks about how extensive the control of their organization is.  We knew that.   Khan talks about training with Shamba-La and embracing the darkness that the Shadow struggles with.  We’ve been over this already.  There’s a page of Ra’s and Khan betraying and murdering the Sherlock Holmes villain James Moriarty.  We’ve been told this happened.  There’s a feeling that the book is just marking time at this point until Batman can piece together where the villain’s headquarters are, and a lot of the sequences feel like unnecessary filler.

That being said, the torture sequences feel appropriately brutal, and I like the idea of Khan toying with the Shadow by resurrecting and destroying Hawkeye is an excellent way to play on the guilt that the Shadow has been carrying throughout this series.

One of the things that I’ve enjoyed about this book is that it has played with some big ideas, and as this story nears its conclusion, I wonder if it is going to pay those ideas off.  The idea that Batman was resurrected and has secretly been controlled by Shiwan Khan is super interesting and was set up masterfully.  But instead of running with this idea, the notion appears to be brushed off to the side.  It’s as if the idea was only for a cliff-hanger between issues and now its done, the story isn’t interested in exploring this idea.  They’ve already shown that Khan can control people who are still alive, as he does with Robin and they’ve already brought up the idea that Khan could be lying.  Whether or not its true, it feels like a misstep to introduce this concept and not make it the focus of the story.  It should be an earthshattering problem, and instead, its treated like a minor annoyance.  The same could be said of the collapse of Wayne Manor and the Batcave.  It’s a bold move that should feel like a bigger moment for Batman then it does.  Batman barely acknowledges that his ancestral home lies in ruins and goes off to his swanky underwater lair.  Even the James Moriarty moment, tying Batman and the Shadow to the world of Sherlock Homes is a great idea, but the story doesn’t feel like doing anything with it, so Moriarty’s murder in this sequence comes across as nothing more than an Easter egg.

Giovanni Timpano’s art is fantastic, and the story is looking for moments to show it off.   There is zero reason to have Batman do some light underwater welding other than the fact that it makes for a beautiful panel.

Final Thoughts: This story started off extremely strong, and while I do feel that they have had some trouble executing some of the more interesting ideas in the book, the series still has my attention, and I’m looking forward to the last issue and seeing how this story ends.