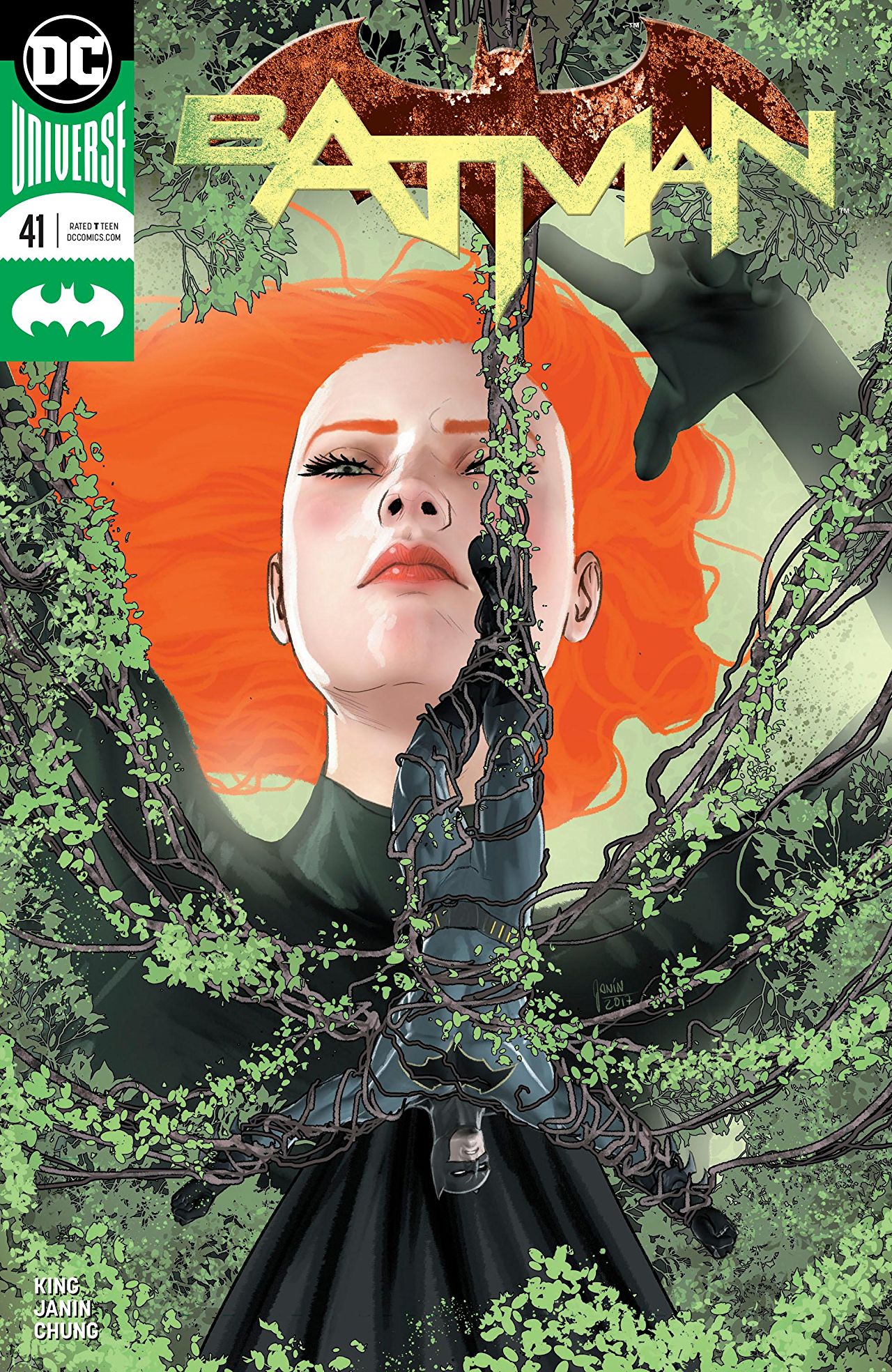 Overview: Bruce and Selina are set to take on the world.

Synopsis (spoilers ahead): Ivy, in a sundress, approaches. She introduces herself. Bruce wakes in a cold sweat. He looks at Selina. She is talking in her sleep. She introduces herself… they are having the same dream. He rushes out of the bedroom. Alfred is waiting for him. His hands are hidden behind his back. He asks Bruce where his clothes are. Bruce collapses. Alfred goes to check on him. More out of mere duty, rather than concern. His hand still hidden behind his back. Bruce cold-clocks Alfred, sending him to the ground. In his left hand, he clutches a batarang.

Ivy continues to narrate as her influence continues. Bruce makes his way to the cave. All the ruckus has awoken Selina, who also makes her way down to the cave. She nonchalantly asks about Alfred, and then seems more concerned with Bruce’s condition; he doesn’t look well. She kisses him on the lips, while Bruce grabs a jet injector on his desk. Selina goes to attack him, but he is able to quickly inject her and she passes out. He then injects himself and does the same. Ivy confessed her love and the world does the same for her.

Bruce wakes again from sleep. This time he’s wearing the bodysuit of his uniform. No mask, gloves, boots, or belt. Selina is laying next to him, wearing the same. “She’s here,” Bruce says. Alfred walks in, and Ivy speaks through him. She tells of a time when Joker attempted to outthink Superman by placing victims in lead coffins, so he couldn’t see them. Ultimately, Superman just looked for what he couldn’t see and rescued them anyway.

Bruce attempts to sucker punch Alfred (again), when Flash runs in and takes the hit, knocking him out. Ivy asks if he would like to try again because there are a few more speedsters around.

“I don’t want anything, Batman. I already have everything”

Both Bruce and Selina tell her that she doesn’t have them. Ivy commends Bruce on his formula concoction. It may prevent her from taking ahold of them, but it doesn’t reverse the effects. Ivy is going to make the world a better place. True, she doesn’t have either of them, but now, it’s as if they are in lead boxes for all to see. She’s sad they can’t be a part of what she has planned. And although it is a shame, it’s not a concern. Alfred walks out of the room.

Selina is beginning to understand what this all means. She keeps asking Bruce questions, but he just keeps giving her the same answer, “I don’t know.”

Analysis: Tom King’s style is very interesting to me. It’s almost disorienting. He doesn’t spell everything out to you, requiring you to find the answers for yourself. Some may not like that. I appreciate this stylistic approach. I also like the metaphorical implications that this story implies. It’s literally Bruce and Selina against the world. How are they going to combat that? How will it affect their relationship? Why does Bruce like punching Alfred so much?

I’ve loved Mikel Janin’s art since I was introduced to it in his Justice League Dark days. His art is incredible. I don’t know how he makes his characters so consistent, but it’s amazing. Bruce looked weird in his suit without all the gear. I just didn’t like how it looked. This would have been an instance where the classic trunks would have looked better on the uniform. The design choice for Ivy was interesting. I preferred the classical look Francis Manapul gave her in Trinity and hoped we would be sticking with that look for a while. Here, we get a throwback New 52 look, which I don’t really care for. His Ivy is truly stunning. It’s no wonder the world is in love with her. I love the more modern take on her and her connection to the Green. And with me being a big Swamp Thing fan, I hope he reappears to help.

June Chung’s colors are beautiful. I really like her pairing with Janin. She has a vibrancy but also has a great tone in her palate. It’s very balanced and works well with Janin. Clayton Cowles did a great job here. His letter placement was on point, but what really won me over was the green font chosen for Alfred when Ivy spoke through him. It immediately conveyed the idea without having being said. That’s what a great letterer can do.

Final Thoughts: A solid first installment that sets up some interesting implications. However, they have not paid off yet, as this is mainly set-up.