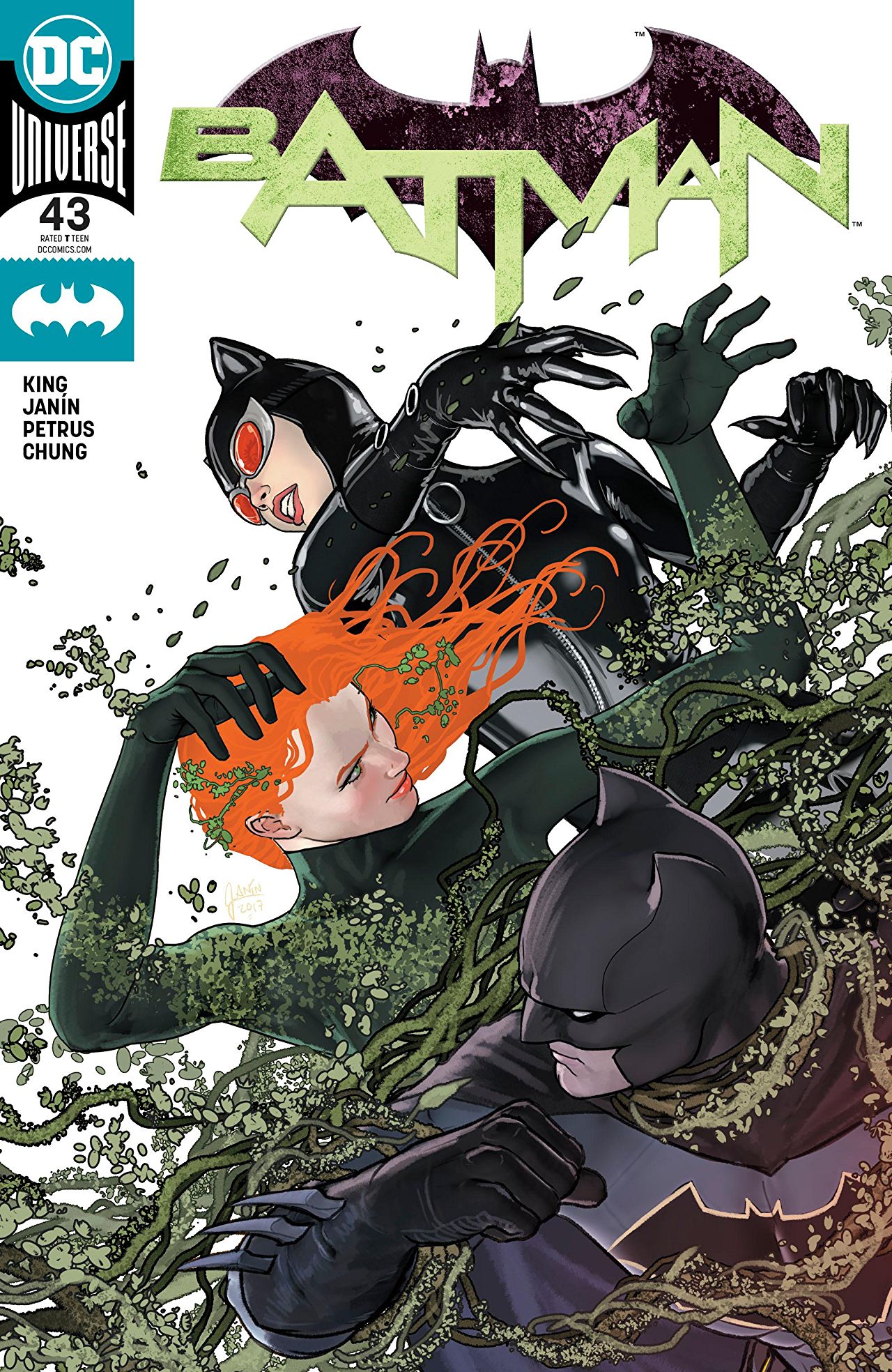 Overview: Bruce and Selina save the world through the power of LOVE.

Synopsis (spoilers ahead): Bruce speaks to Ivy through Harley. Ivy has Clark and various other members of the superfamily in the room with him. Bruce tells Ivy that there are some wars that just can’t be fought. At the same time, Selina is talking to Ivy. Ivy asks her why she didn’t take a side in the War of Jokes and Riddles. Selina tells her that she just couldn’t let them use her like that. This makes Ivy feel weak, along with guilt for the five men that died under her watch.

Bruce knows exactly which buttons to press. Before he wouldn’t understand, but since being with Selina, he gets it now. He reaches out to Harley, knowing Ivy wouldn’t have taken a complete hold of her. Because to Ivy, Harley is special. Ivy grows distracted while talking to Selina, and Selina admits that it’s part of the plan; she kicks Ivy in the head, knocking her out. Now, Bruce has fourteen seconds to reach Harley before Ivy wakes up and takes hold of her again. And Selina has fifteen seconds to wake Ivy before planes start crashing. Bruce picks up Harley and carries her out. They jump out a window and land in the Batmobile below. The car suits him up before Harley comes to. She wakes up and he tells her to tell Superman that she wants to meet Ivy face to face.

At Ivy’s garden, Harley makes fun of Batman’s car that can put on his pants for him. She comforts Ivy, and Selina tells her that she has to get over the men that she killed. But Bruce remembers this; Ivy didn’t kill those men, Nygma did. He shot them in the head. He lied to Ivy. And she believed him, not because she was weak or young, but because she’s not a villain.

Clark takes Ivy to a sanctuary to help her. She had seven and a half billion people in her head. They hope they can help her, but honestly, Bruce just doesn’t know. Selina tells Bruce that they’ll be okay. “Yeah, Cat. We’re going to be fine.”

Analysis: Tom King closes out this story arch in a much quieter way than I expected. With the whole ‘Bruce and Selina against the world’ thing, it seems as though it would end being a little more balanced. The main problem I have is that we don’t really know where things are at from the start. Ivy is generally a villain. Her killing people isn’t really a surprise to me. Here, however, King has her being severely traumatized because of the human lives that she believes she took years ago. So for her to care so much about this issue, really threw me off. Maybe if we established that she felt guilty from the beginning, I’d feel different about it, but it just didn’t sit well with me here.

I like how King writes Bruce as having a different outlook on things now that he’s in a relationship, but hasn’t he been in a relationship before? Even recently, he was considering spending the rest of his life with Julie Madison. These feelings shouldn’t be new to him unless we are going the route of “soulmate.” Also, the Superman of China being present with Clark and Kara threw me off. It makes sense, with Ivy controlling the entire world, but I haven’t seen this character in any of the other books recently. It’s almost as if it was growing into its own continuity.

I don’t want it to come across that I am ragging on this book. King does a great job with story structure. Referencing something that happened in a previous story arc is cool, but it was also one that I myself missed out on, so I missed out on that entirely. Regardless, I did think it was cool that it was brought back. His dialogue can be extremely vague at times, which can be difficult to understand what is happening at times, but it also feels more conversational. I look forward to seeing how the wedding is handled, as we get closer to those issues.

Mikel Janin’s work is as solid as always. He is always super consistent, not only in his characters but also in his style. His attention to detail is amazing. The pages with Ivy in her garden were standouts, as the vivid line-work on the plant life would make those great work to hand on the wall. Hugo Petrus fills in for a total of four pages. I remember thinking that Janin must have been in a bit of a rush on the page where Bruce jumps out the window with Harley and it turns out, it wasn’t Janin at all. Petrus does an amazing job mimicking Janin’s style so much so, that I really did think that nothing had changed. Even on the last page, he upholds the style that Janin has perfected. Well done work for someone filling in. June Chung’s colors are very striking. As with the rest of the art, though, the scenes in the garden look the best. I think it’s the warmer color tone that makes it looks better with the clean lines of Janin as opposed to the cooler blues. Even the sepia tone was nice, implying a flashback. Clayton Cowles does a great job with letter placement as well as the font choice. King often layers his scenes together and a good font for each character definitely helps to differentiate who’s talking.

Final Thoughts: As I said earlier, this issue was much quieter than expected. It’s not my favorite installment of King’s Batman run, but that’s not to say that it’s bad. I just found myself disinterested while reading this issue. I’m still excited to see what happens with the wedding.