Review: The Brave and the Bold: Batman and Wonder Woman #2 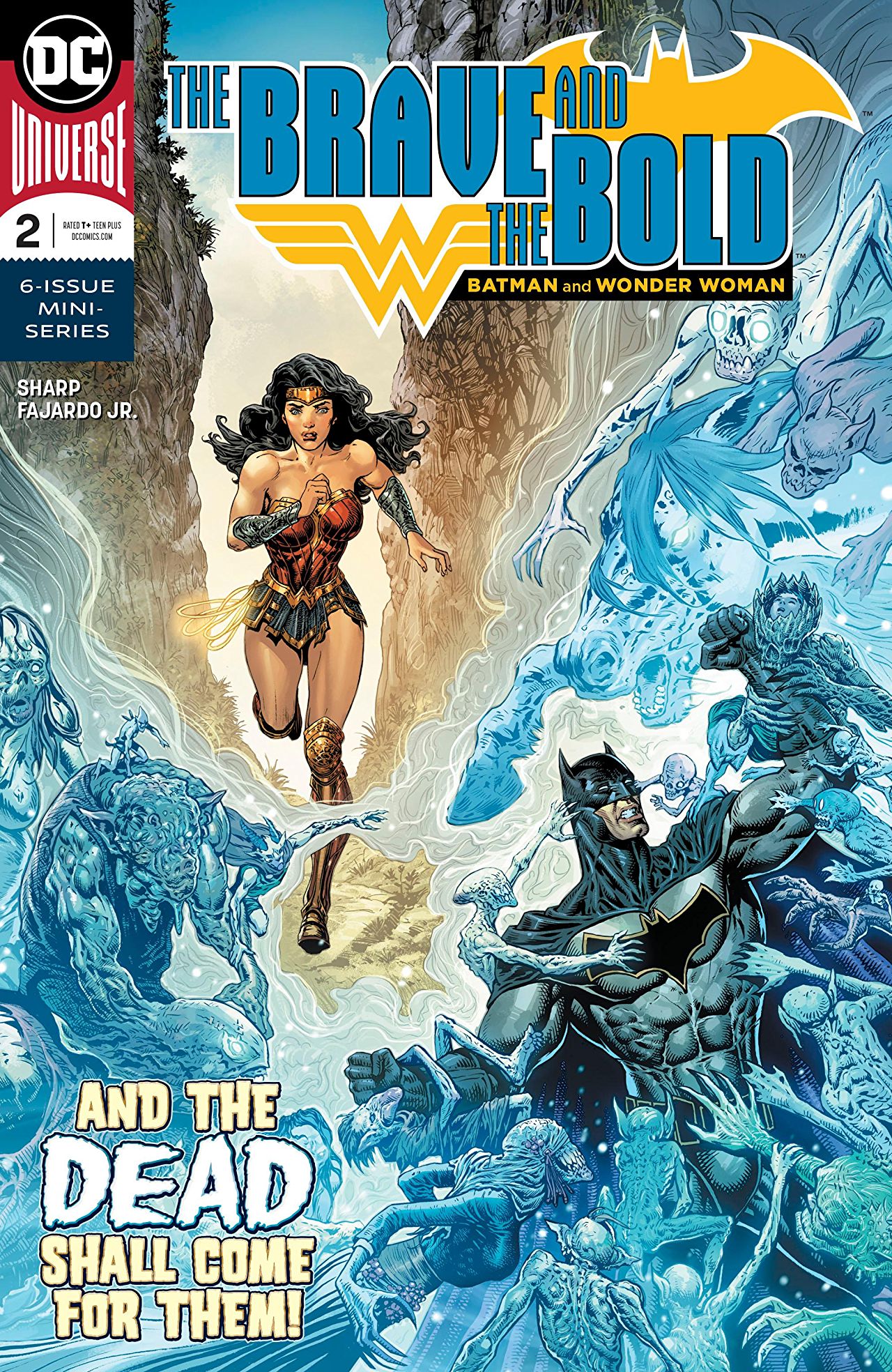 Overview: We see Diana play peacemaker with Captain Furf and King McCool, Bruce finding the cause of terror in Gotham, and Liam Sharp continuing the amazing work he did in the first issue.

Synopsis (spoilers ahead): The issue opens with Diana holding Captain Furf in the air by the collar sternly telling him “…I did not choose to fight. Know this – I shall end it.”

Furf stresses that justice must be sought for their king’s murder. Diana acknowledges and sympathizes with their situation, but shares that justice is not found by prosecuting a man without a trial. She uses her lasso on the boy and he admits he did not commit the crime. Furf asserts that in this magical realm, her lasso is not a convincing tool that reveals the truth. She tells them that an investigation is needed to solve this crime and Cernunnos calls for both houses of the Fomorians and Tuatha Dé Danann to gather in the Grand Hall to settle this case.

Patrick O’Schull (the seemingly homeless guy in the Irish Quarter from the previous issue) is the last of the Gotham Druids and is trying to find his way to Tír na nÓg. He once thought that Tír na nÓg was under Ireland, but he was wrong. It is under Ireland, but not in a conventional way. He mentions that the passageways to Tír na nÓg are where the ley lines cross. Many of those access points are covered by concrete, office blocks, parking lots, or lost to the ocean. But in the Irish Quarter, he has found a passageway.

The camera pans to Bruce, still frozen in fear in the middle of the street. Bruce, being consumed with a harrowing hallucination, is called by Alfred to return to the Batcave. He states that all Bruce needs to do is to concentrate on his voice. Bruce, with an iron will, gets himself outside the perimeter of the Irish Quarter and heads home. In the cave, he tells Alfred that what he experienced was caused by magic.

Back in the Grand Hall of Tuatha Dé Danann, Furf begins the trial by saying that if they cannot find the murderer then there will be an all-out war. He also says that King Elatha dreamed of leaving Tír na nÓg for Earth via the old causeways. Cernunnos asks for King McCool of Dé Danann to speak on behalf of the accused. He addresses the audience that he and King Elatha worked to establish a lasting peace between the Fomorians and Tuatha Dé Danann. He states “…Captain Furf knows that even as a practical consideration, we cannot simply ‘cast open the old causeways’ and ‘march out into the world…’ We neither have the strength nor the magic any longer!”, for it was the love bestowed by humanity that gave them their power.

Furf retorts that McCool is wrong and they have the ability to leave Tír na nÓg. After more insults, Diana steps in separating the men and calls for them to cool down. Furf demands her to be expelled from the court since she is a foreigner and has stopped him twice from confrontation with the Dé Danann. She shares that they are not prepared for the earth, nor is earth prepared for them. Before they should consider leaving Tír na nÓg, they need unity and justice. This “trial” is not a trial for there is no investigation yet. To help facilitate an investigation, Diana knows a knight who can help, Bruce.

Patrick, at the place where three ley lines cross, pleads with the gentry to open the passageway, for he has given his life to them. At that moment, the rocks disappear and the entrance opens.

Back in the Batcave, Bruce comments that what he went through was a lucid nightmare. The people of the Irish Quarter are dreaming terrifying nightmares. Alfred asks if this hallucination was chemical based. Bruce asks if he has ever felt the effects of magic. At that moment, Diana appears and asks Bruce for his help.

Analysis: To fill in the missing pieces, let me define some words that were found in this issue:

(If you need to refresh yourself on the other Celtic words and phrases in this issue, please check out the analysis section of the first issue in this miniseries.)

In this issue, we are able to see more of “diplomat” Diana. I have forgotten that Diana is an emissary for Themyscira because she is so often depicted as a warrior first. She, as the impartial third party, balances both sides of the conflict well. I appreciate also that she respects their view of her lasso; she realizes that she could not convince them that her magical lasso always prompts truth. As a way to find the truth, she brings Bruce in to conduct a neutral investigation of the matter.

The b-plot with Bruce also developed nicely. We know that Bruce has gone through many things, yet I have never seen him speechless in fear. He has many times been injected with the Scarecrow’s fear toxin but has not been consumed with terror as he is in this issue. If that is the case, we know that Bruce and the people of the Irish Quarter will be in for a wild ride.

As Bruce points out that this terror in the Irish Quarter is the product of magic, we see him trying to reconcile how magic works. He tells Alfred that it is still an anathema to him, and there must be a scientific reason for the powers of magic. He asks how is he supposed to stop magic when he has no way to detect it in Gotham. What means does he have to stop it? He also shares that magic is a real thing, for he has seen a man shift from man to wolf before. He understands that there are some things that science cannot explain yet like magic or how he died and came back to life (Snyder’s Endgame and Superheavy New 52 arcs), been to other realms that science cannot predict (e.g. Skartaris in current Trinity run), and he has been a vessel to godlike powers (John’s New 52 Darkseid War arc).

Although it is ambiguous whether this miniseries is connected the main DC continuity, I like how Sharp folds those events into his story. I always appreciate when writers use references from other books in their stories. It shows that they are staying in touch with their colleagues’ works.

If I can copy and paste my analysis of the art from the last issue’s review, I would. Sharp’s detailed use of pencils and colors gives this book a level of crispness that I have not seen in other DC titles, except for his run on Wonder Woman (which makes sense). He gives great detail in drawing faces; many artists struggle with the intricate details of faces, yet this is where Sharp excels. His take on the Batcave is different, but not out of the norm. You get to see all of the technological improvements he made to it and still see its cave-like features. Besides seeing the hangar of bat-vehicles or the bat-computer, we do not often see other parts of his lair.

Final Thoughts: Overall, Liam Sharp has done it again. Enough said. Get it and read it.