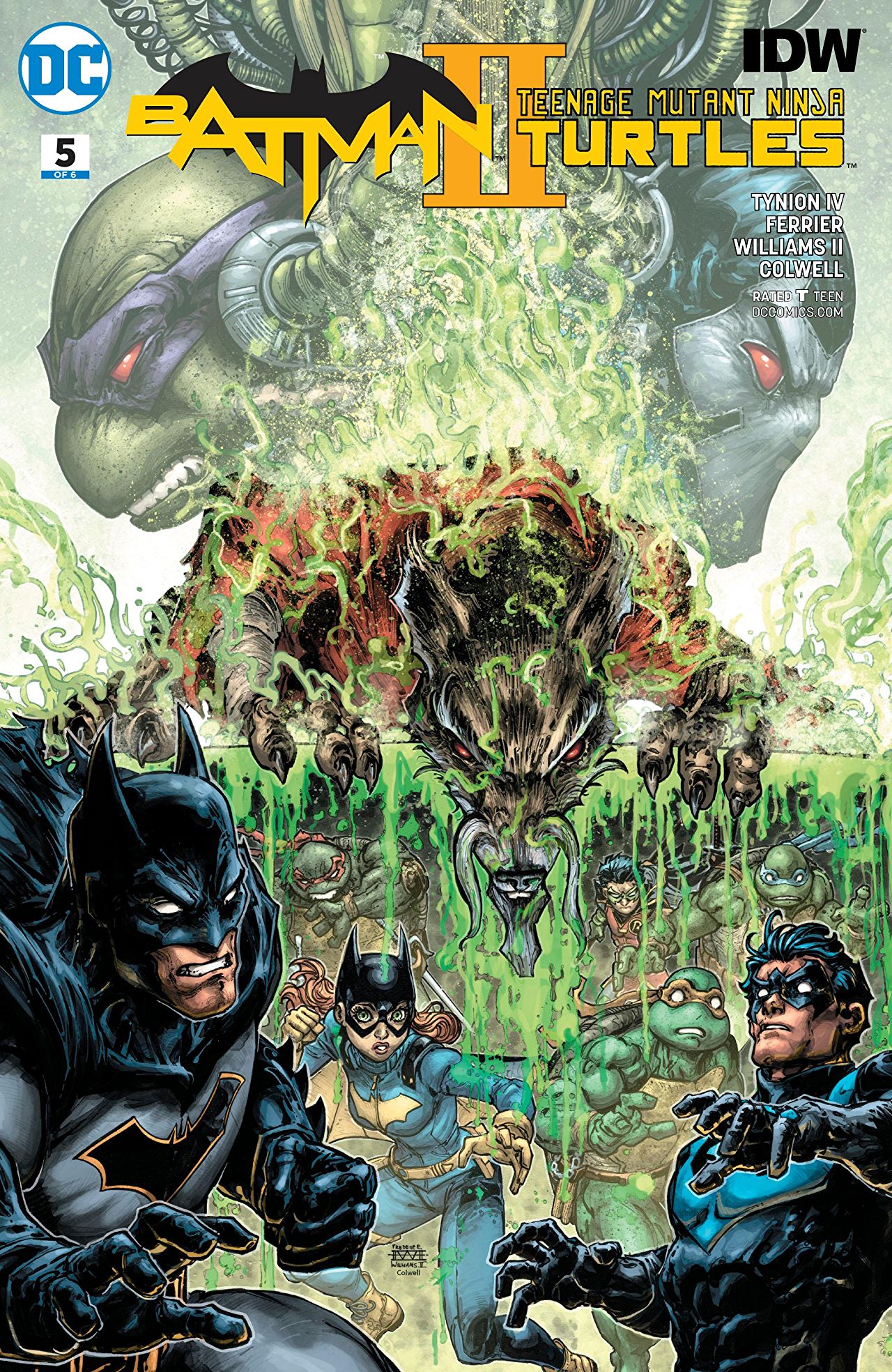 Overview: Batman and the Turtles face a Venom-powered Donatello as Bane consolidates his power over New York City.

Synopsis (spoilers ahead): The issue opens with the Foot’s Elite Guard under attack by a Venom-Powered Donatello, who decimates the group of ninjas until Batman and Leonardo intervene.  The two try to reason with Donatello, who is overcoming the Venom and his own rage and attacks them.

Meanwhile at the Turtles’ layer, Robin and Raphael keep vigil over the critically wounded as April O’Neil manages to open a portal into Batman’s world.  Raphael carries Splinter as he and Robin walk through to join Batgirl and Nightwing on the other side of the portal.

Batman and Leonardo fend off a rampaging Donatello while Robin, Nightwing, Batgirl, and Raphael bring Splinter to an underground Lazarus Pit with hopes of healing him.  Batman and Leonardo manage to appeal to Donatello’s intellect, showing him that there is a flaw in Bane’s formula.  The Bat-Family and the Turtles meet back up at the Turtle’s lair with the newly recovered Splinter and the still massive Donatello just as Bane broadcasts a “join him or die” message to New York.

Donatello develops an anti-venom, an aerosol spray that he uses to turn him back to normal.  Nightwing points out that the Foot Clan will need a strong leader to rally behind before they will turn against Bane.  The issue ends at Riker’s Island, with Batman opening the Shredder’s cell.

Analysis: This issue is about setting up all the pieces for next issue’s finale.  The issue seems to have a lot of ground to cover to get the story to where writer James Tynion wants it.  As a result, the issue has a bit of a rushed and abbreviated quality to it, primarily in the stuff surrounding Donatello.  This story has primarily been Donatello’s and while it is no surprise that Donatello would come around to see how exactly he brings value to the team, I wish they’d given his time as a giant green rage monster a little more time to breath before Donatello coming to his senses.  I think it would have been more interesting to see an amped up Donatello try to go up against Bane alone and have it be a disaster, or show the rest of the Turtles fail in trying to take down Bane without Donatello then have him be quickly talked to his senses in the way the story has chosen to do it.

I will admit to a moment of being super annoyed with the story in the handling of Splinter’s recovery.  The story takes the time to set up how dangerous an out of control Splinter could be after being revived by the Lazarus Pit and then jumps to him walking into the Turtles’ lair alive and well.   The story does give a flashback panel shortly thereafter showing a feral Splinter taking on an army of ninja Man-Bats, but it doesn’t seem like a big enough pay off to the idea that is being set up and shouldn’t have been distilled down to a simple panel.  If the story didn’t allow for them to explore what a danger a temporarily insane ninja master would be, then why bother going there in the first place.  I also have to object again to the broadcasting of Splinter’s trip to the Lazarus Pit on the cover to the issue as it robbed any surprise from that plot point.

Those gripes aside, there’s a lot to enjoy in this story.  I continue to love Tynion’s take on Bane.  You can see the influence of versions of Bane such as in the Dark Knight Rises’ fascist dictator take on the character in this issue and his plot to take over New York feels very natural.  Bane is one of those characters that I don’t feel that DC in large really knows what to do with since his first big story with Knightfall (Name 10 great Bane stories in the last 25 years… I dare you).  It’s interesting to me that this book has been coming out at the same time as a book staring Bane written and drawn by his original creative team, and yet I prefer this take on the character.

Freddie Williams’s art has been solid throughout this story and his cartoony style blends the more grotesque elements such as the mutants in with the rest of the world.  As this series starts to wind down, I’m very interested to see what his next project will be.

Final Thoughts: Pacing issues aside, this series has been very entertaining and I look forward to seeing how it all wraps up next issue.