Review: Batman Sins of the Father #2 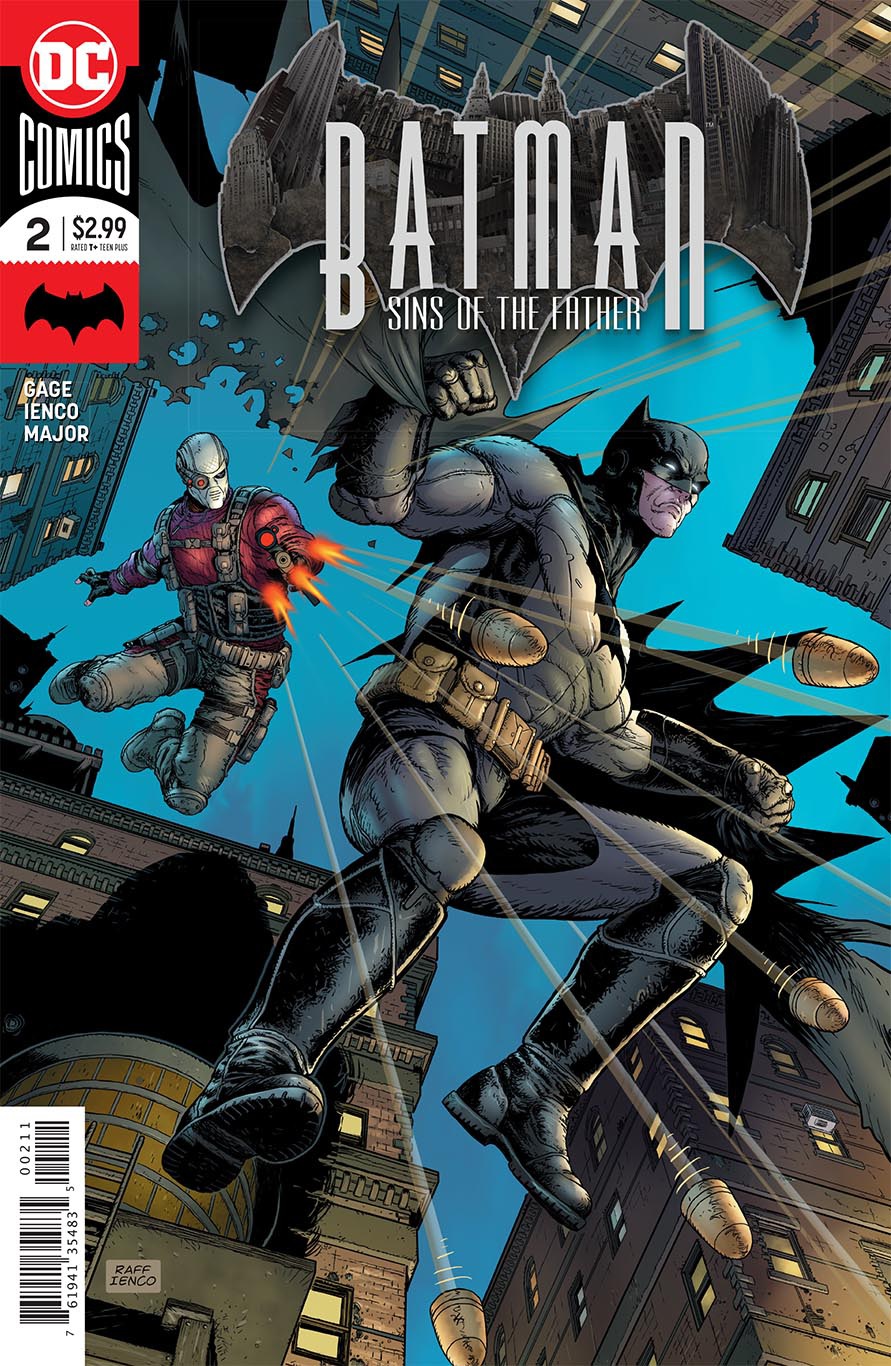 Overview: The body count rises and another villain is revealed as Batman investigates the motives behind Deadshot’s actions.

Synopsis (spoilers ahead): The issue opens in the aftermath of last issues attack by Deadshot on the group of former Arkham Asylum workers that were gathered together by Bruce Wayne to begin to atone for the actions of his father when Thomas ran and used the asylum to lock up those who opposed his criminal empire. Commissioner Gordon is present is questioning Wayne and board member Regina about positive motives that lead to the attack. Regina posits the theory that it is the group suing the company that hired the hitman while Gordon says it’s also possible that the Wayne Enterprises Board would want to silence those witnesses before they can testify against the company. The only evidence was a stolen German-made gun that Bruce intends to use to help track down the killer.

Cut to Batman “interrogating” his own witnesses. A captured gun runner confesses that the power vacuum present in Gotham is being filled by both people and weapons and that a stolen, German-made gun is a needle in a haystack when it comes to weapons moving in and out of Gotham.

Batman returns to the Batcave where Alfred sides with Regina that the attack may have been based on revenge, though Batman is not so quick to accept that theory as none of the victims suing Wayne Enterprises has the kind of wealth needed to hire a professional assassin, as their wealth was taken away from them as part of Thomas’ vendetta against his dissidents. Bruce is torn up by the actions of his father and questions if he is becoming more and more like Thomas rather than truly helping to save the city. Alfred reassures Bruce that it is not his motives that make him a good man, but his actions.

Batman returns to patrol, having drones tracking all the remaining targets of Deadshot. One of the drones spots The Black Spider breaking into the apartment of Lucinda Brigham, the former head nurse of Arkham Asylum. Batman swoops in to stop him and knocks him away and the two begin a fight, with Batman knocking away Black Spider’s guns so the two go toe to toe, fist to fist. Black Spider is eager to test how good of a fighter Batman is and says that’s part of the reason he took the job. Batman gets the upper hand and asks why Black Spider was hired alongside Deadshot. Spider, however, reveals he wasn’t hired with Deadshot, he was hired by Deadshot. It’s at that moment that Deadshot shoots Batman with a sniper rifle clear in the chest, knocking him down and seemingly unconscious.

Black Spider is impressed by the marksman, who tells his associate to fire two shots into Batman just to make sure he’s dead. Black Spider is about to do just that when Batman “wakes up” and takes Black Spider out with a swift kick followed by a batarang into Deadshot’s rifle. Batman and Deadshot begin fighting with Batman continuing to ask why Deadshot was hired or if he’s just another vigilante who plays by his own set of rules. Deadshot gives up no information, though Batman assumes with Deadshot’s technology, including an eye laser, the assassin is already wealthy. Batman does also learn through the fight that Deadshot is a better shooter than a fighter, which is why he hired Black Spider as muscle. Black Spider returns to the fight just long enough to distract Batman while Deadshot shoots a missile at the apartment, blowing up a good chunk of the building. Batman swoops into the smoke to save Brigham, which also obscures him from Deadshot’s view so the assassin cannot get a clean shot at the Dark Knight.

While he was too late to save Brigham, Batman was able to learn that whatever Deadshot’s motives are, they’re deeply personal. Back at the Batcave, Bruce tells Alfred that Deadshot’s actions are those of someone with a grudge against Arkham during Thomas Wayne’s time, and it doesn’t add up with him being a hired gunman, as there is no way the victims of the Asylum could have paid for Deadshot’s services.

Batman hits the streets again looking for any lead and comes across the nephew of a woman committed to Arkham years ago. While the nephew has the same body type and a gun collection that may suggest being involved, an interrogation by Batman leads the man to admit he’s actually working for an unknown boss who sends him puzzles to solve and directions to what he wants to be done. This interesting thread is put on hold as Batman realizes that in order to get more information on Deadshot, he’s going to have to break into Arkham if he really wants to find out the motive’s behind Deadshot’s actions. The only problem is Arkham has vastly improved its security. And the last time Bruce was in Arkham, he was trying to break out.

Analysis: Thomas Wayne was not a good man. The title of the series, Sins of the Father, is really hammered home thematically this issue as we learn that not only did Thomas Wayne commit and experiment on innocent people in Arkham Asylum, he also made sure to financially destroy the families of those same inmates. What I really liked was that Bruce is so afraid that he might become his father, and that unknowingly he will follow in the dark legacy that was set before him. Alfred steps in as a surrogate father to Bruce, reassuring him that by his own actions, he is preventing himself from ever repeating those sins. Still, while Bruce doesn’t want to become his father, he still must clean up after him, and now that means taking on Deadshot.

I’m not a huge fan of Deadshot as a character, basically just an assassin for hire, but this issue wisely creates a mystery around the character asking the reader to try and deduce why Deadshot is actually killing the former staff of Arkham. I have a theory that we’ll learn that one of the victims of Thomas Wayne will be somehow related to Deadshot, be it a parent or sibling, as it would be too far back for it to impact a child or wife of his. The mystery of Deadshot also kept me engaged as while Batman was investigating, little nuggets of information kept dropping about new players in the Gotham underworld, and while it’s a subplot, I’m interested to see if this will tie into the miniseries in a larger role.

Writer Christos Gage does enough to keep the plot moving along and engaging from start to finish. Never does it seems like we’re being hit with information over and over again or that we are left not knowing where in the plot we’re currently at. As this is a miniseries, Gage is tasked with telling a complete story that also fits into the continuity of the games so the tale is far enough away from Batman’s story in the game and the character does benefit from a smaller, more personal narrative. every character acts and sounds like their classic comic book counterparts. So even though the story is wholly unique, the characters still resonate.

The main set piece of the issue was a fight between Batman, Black Spider, and Deadshot, and this is where the art by Raffaele Ienco really shines. I spoke in my last review that his character work shows a great attention to detail and those details are not lost as Batman and Black Spider engage in combat. The action moves swiftly, the choreography of the fight is easy to follow and you feel each kick and punch as it is drawn on the page. The quieter moments allow for the character work to shine as even minor characters are recognizable. I never found myself wondering who was who or what they were doing, which can often occur when there are several characters outside of the main cast. I would like to see Ienco take on other characters in the Bat-Family or more colorful villains as the designs for Deadshot and Black Spider are not the most outlandish of Batman’s Rogues gallery.

Final Thoughts: The second issue of Batman Sins of the Father continues to keep me hooked by expanding on the dark past of Thomas Wayne and the continual impact it has on not only Bruce but Batman. I’m eager to see how Deadshot fits into this overall story and hope the reveal of his motives are satisfying.