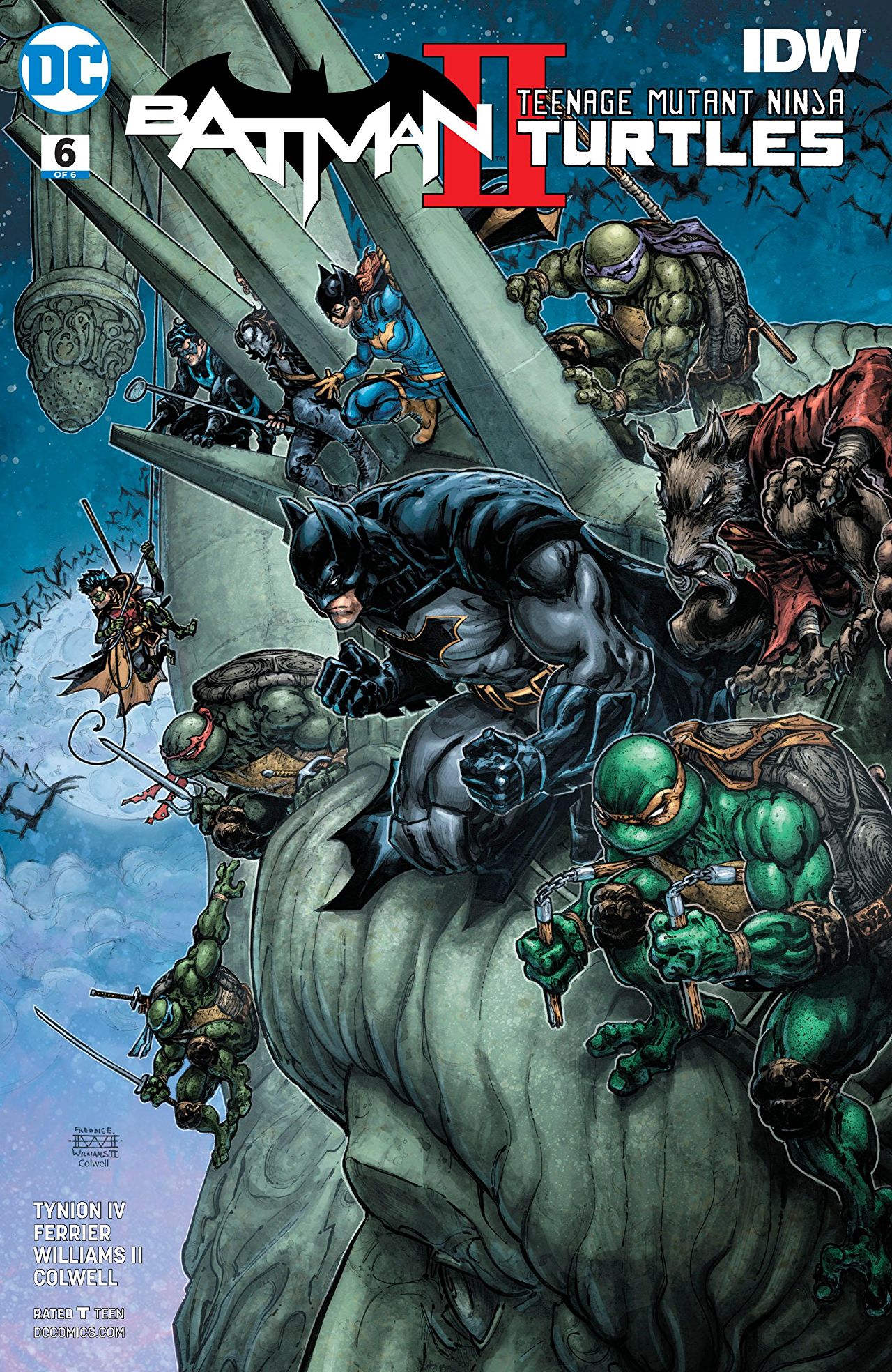 Overview: It’s the final battle between Batman and the Teenage Mutant Ninja Turtles against Bane and the Foot Clan for the fate of New York City.

Synopsis (spoilers ahead): The issue opens with Donatello piloting the Turtle Blimp to the Statue of Liberty, where Bane sits on a thrown as his venom-fueled army rallies around him.  Donatello is attacked by the Foot’s Elite Guard, with Donatello making his escape on a rocket board as the blimp explodes, releasing Donatello’s anti-venom formula over Liberty Island, neutralizing the venom in the Foot Clan’s system.

Batgirl, Robin, Nightwing, the rest of the Turtles, April, and Casey Jones crash through their hiding place on a ferry in the Party Wagon and charge against Bane’s army.

Batman and Splinter confront Bane, having brought the Shredder with him to challenge Bane’s leadership of the Foot Clan.  The three of them attack Bane as the others fight Bane’s army with non-lethal weapons developed by Donatello.  Bane is kicked through a wall and commands his army to kill Batman and the Turtles but finds with the exception of Bebop and Rocksteady, his army has betrayed him and is again following the Shredder.  The group overpowers Bebop and Rocksteady and Bane is taken out by Donatello with a high-powered dart gun.  The Shredder returns to prison willingly as part of his deal with Batman and the Bat-Family returns to their universe with Bane, leaving Donatello a training program to hone his fighting skills.

Analysis: And so ends the latest meeting between the TMNT and Batman.  It’s a fast issue that tries to pay off everything that it has been building in the previous 5fiveissues.   The story is consistently a Donatello story and they do a decent job of paying off the lack of confidence and self-esteem he’s been fighting throughout the story by tying in his character in how the heroes defeat Bane.  I think they do a good job of finding ways for Donatello to be front and center in the resolution of this story.

I do feel that in looking back on the story, it doesn’t really feel like they capitalized on using Batman and his world.  This is more or less a Donatello focused Turtles story with some Batman window dressing.  Its fun to see Batman and his team interact with the Turtles, don’t get me wrong, but they don’t really affect the outcome of this story in any real way, which does seem like a missed opportunity.  The one element from Batman’s world that does continue to shine throughout the story is the use of Bane, who as if stated throughout this series, I think has consistently been the best he’s been in years.

Writer James Tynion, with Ryan Ferrier, clearly grew up watching the same 80’s cartoons that I did.  This version of the Turtles shows a lot of love to the original 80’s cartoon series and having that version of Bebop and Rocksteady and touches like the Turtle Blimp and Party Wagon being featured prominently in the issue brought a smile to my face.  Shredder’s appearance in this issue does feel a bit perfunctory and I don’t think they do enough in the story to have him show up for the finale without it feeling a bit out of nowhere.  I also would have like to have seen the rematch between Batman and the Shredder, so having been told and not shown is a missed opportunity.

The art by Freddie Williams continues to work well for the story. I continue to love how massive he draws Bane, as he’s never looked more imposing.  The art does feel a little rushed in some of the larger battles in the issue.  I also thought the moment when the Turtles and Bat-Family launch themselves out of the Party Wagon should have been a bigger, more dynamic moment, possibly giving it it’s own splash page and the moment is smaller and is crowded by everything else going on in the sequence.  That being said, I really like Williams’ art and I hope we see more of him soon in The Batman Universe.

Final Thoughts: I enjoyed this series as a love letter to the TMNT, as it made me remember when I was a kid, as well as the overall treatment of Bane.  Go throw on Vanilla Ice’s “Ninja Rap” and enjoy it.